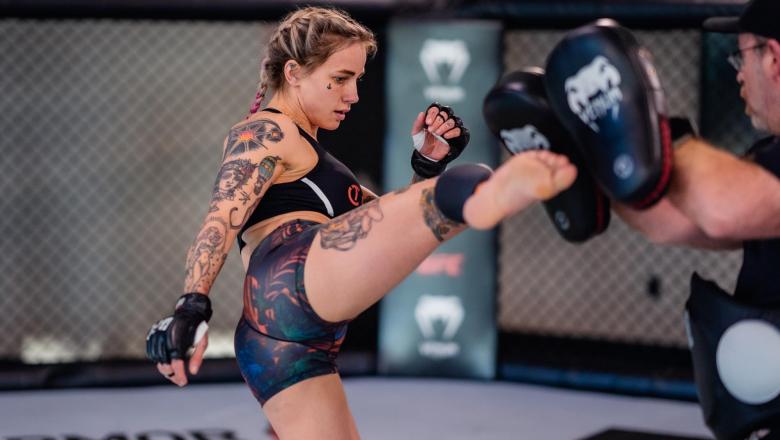 Unfortunately, sometimes progress requires change, and to get to the point where she could represent her nation on the world stage, she had to leave home. By 2016, she was in Las Vegas, and now her base of operations is in California, where she trains with Kirian Fitzgibbons and the CSA crew in Dublin, along with the Team Alpha Male squad in Sacramento. And though Clark believes she could have still made it to the UFC while living and training down under, to be the best fighter she could be, she had to pack her bags and leave.

“I would have had to hunt a lot harder for the right training,” she said. “I have a really great gym in Sydney that would have served as a base camp, but the issue with being back in Australia is that I never really had any female training partners because there were so few of us on the scene, and I fought all of them and we all lived so far away from each other. So I definitely think I could have still been successful, but to be honest, I actually moved to the U.S. with the goal of training with the coach (Fitzgibbons) that I have right now. So I think if I had stayed in Australia, I always would have felt like I was missing out on something because I knew the gym I wanted to be at and I knew the coach I wanted to learn from.”

The alliance with Fitzgibbons has produced a 2-2 record thus far, but beyond the numbers, Clark has seemed more at peace with the pressures of life at the top level of the sport, and realizing that sometimes, it’s just not your night. But when it is, Clark can hang with the best at 135 pounds, and that’s a beacon of light for the fighter and for the ones she hopes to reach with her platform.

“I do want to go back to Australia soon and I realize that there’s not really any Australian women that are really doing it anymore,” she said. “In the UFC, there’s myself and Casey O’Neill. In Bellator, there’s Arlene Blencowe and Janay Harding, but that’s pretty much it these days and I don’t even know of any up-and-coming Australian women that are fighting. So I was thinking about that and trying to figure out if there’s anything I can do to help switch that, to encourage more Australian women to get in the sport. Because realistically, Casey O’Neill’s still really young and she hasn’t been doing it that long, but the rest of us – myself, Arlene and Janay – we’ve been doing it for a while, and once we’re out of the sport, who’s left? So I would like to be a better representative of that and I would like to figure out how I can encourage more Australian women to get into the sport and show them that it’s possible. I’m not entirely sure how I do that yet, but that is part of my plan for when I go back home is to figure that out because it makes me sad that we might be the last of the Aussies on the big stage for a while.”