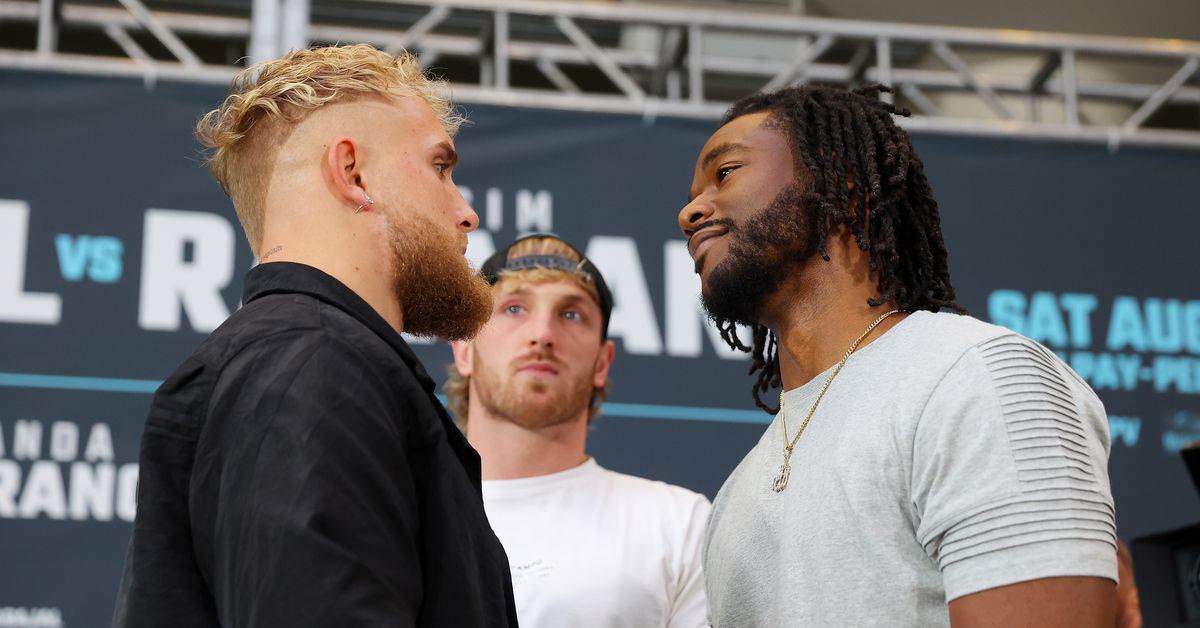 Hey Maniacs, let’s get into another day of things that went down in the weird and wonderful world of combat sports.

First up, it’s that man again — Jake Paul. You know, we might be very close to seeing him finally get his comeuppance. Despite yesterday’s fears that Hasim Rahman Jr. might fall out of his August 6 date with Paul, everything now seems to be set.

Rahman is unlike anyone Paul has faced so far in his young boxing career. For one, Rahman is an actual boxer. He’s got a 12-1 pro record. None of Paul’s past opponents had pro boxing experience. The only fighter he faced who didn’t have a 0-0 record is Tyron Woodley in their rematch (he was 0-1 with a split decision loss to Paul on his record).

Rahman has also shown that, unlike Paul’s previous opponents, he’s not getting drawn into the circus nature of a Paul brother boxing show. And that appears to be getting under Paul’s skin.

In his bouts with Woodley, and his aborted fight with Tommy Fury, Paul has shown that he likes to make prankish side-bets with his opponent. This lead to the overly-long saga involving Woodley eventually getting Paul’s name tattooed on his body.

Before Fury pulled out of their first fight, it was reported that the British boxer and reality star had agreed to change his name to ‘Tommy Fumbles’ if Paul beat him.

At their press conference today Paul desperately tried to get Rahman to agree to some sort of bet. But Rahman wasn’t having any of it.

After Rahman turned down a $500,000 cash bet, Paul tried to get more creative.

“I’m not about to bet no money. I don’t bet money,” Rahman answered.

“Broke ass – let’s bet this: When I beat you, you have to change your Instagram name to ‘I let my dad down,’” Paul said.

Despite his resistance, Rahman did seem to like the idea of forcing Paul to change his Instagram handle. “What are you going to change [your Instagram name] to,” he asked.

Rahman’s resistance to taking on a side-bet, or feeding into a carnival atmosphere for the fight really seemed to irritate Paul. Later in the presser he claimed Rahman was headed for obscurity after their showdown at Madison Square Garden.

“This will be the last time anybody hears from you,” he said. “It has to do with how much you get paid, that’s why I’m the highest paid boxer — because I have the most followers in boxing.”

“He don’t want to make the bet,” Paul added. “He’s all tough. Look at those big old arms. He’s so big and strong, he’s going to knock me out, I haven’t fought nobody, but he won’t make the fucking bet. Pussy motherfucker right here.”

Paul and Rahman were former sparring partners. They are doing a good job of making us think that their fight on August 6 will include plenty of animosity, though. Does this late opponent change, and Paul’s frustration with him, make you more likely to tune in? Let us know in the comments.

In case you missed it, UFC President Dana White decided to give a kid he’s been hanging around with a box filled with cash for his birthday. It didn’t exactly go over well with fighters past and present.

Retweet if you think Uncle Dana should give all of the UFC’s top 15 ranked fighters $250,000 for their next birthday. https://t.co/F9BhltEPP7

Louis Smolka had a lot more to say on Twitter today.

He said I would have got fight of the night for my debut if it wasn’t for yoel and brunsen, but he would “take care of me” I got excited thinking I was getting one of those big locker room bonuses. They sent me 10k. To this day that is the most I have ever gotten

TUF is a fraternity in more ways than one.

So this might be a thing. Who you picking (MMA rules btw)?

Here’s the moment that made Hasim Rahman a household name, albeit briefly.

Be careful who your spare with.

Here are some Nadaka highlights to enjoy. Love those trips.

I know this makes the rounds every couple of months, but it’s still a great way to spend a minute and 41-seconds.

Cynthia Rothrock vs Karen Sheperd in “Righting Wrongs AKA Above The Law(1986)”. This is a reupload in better quality but guess what? From the @HiYAHTV upscale that is currently streaming right now in NA. Yes, they are streaming Righting Wrongs. $3.99 a month. pic.twitter.com/uNLoy2dran

Something to check out if you’re interested in the latest Marvel movie (Thor: Love and Thunder). Wired found a Norse mythology expert to break down where the superhero franchise aligns and deviates from the actual sagas.

Lofi girl got hit with a DMCA, pulling her extremely popular chill-out music stream off of YouTube. So if you’re looking for something new to put on in the background while you go about your business, I recommend this one (inspired by the iconic Cowboy Bebop).

One of A24’s latest offerings is the dark comedy Bodies Bodies Bodies. If you’re not familiar, A24 is known for turning oddball indie-style movie ideas into mainstream hits. Their most notable releases include Everything Everywhere All at Once (2022), Ex Machina (2014) and Midsommar (2019).

Bodies Bodies Bodies is about a group of kids partying in an abandoned mansion. After the revellers decide to play a murder-mystery party game, things go down hill fast leading to a very real murder.

Check out the trailer below:

Ok, that’s all for now. Rest up Maniacs.