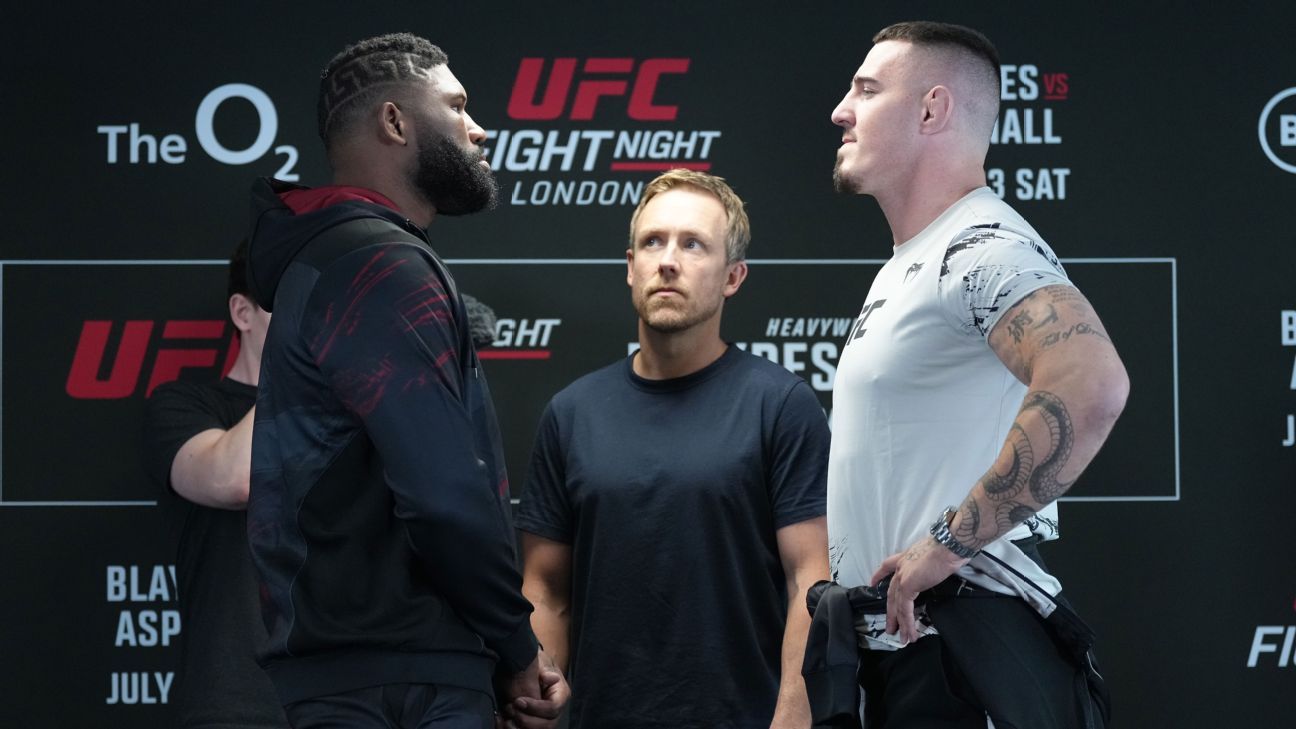 LONDON — The UFC is back in England for the second time this year with a UFC Fight Night card on Saturday inside the O2 Arena.

The promotion went three years without a single event in London between 2019 and 2022, but it’s making up for lost time by staging two in the past five months. English heavyweight Tom Aspinall (12-2) has served as the headliner for both, and he could take a big step toward title contention with a victory over Curtis Blaydes (16-3) this weekend.

Follow along as Brett Okamoto and Marc Raimondi recap the action, or watch the fights live on ESPN+.

Jack Hermansson relied on his length accurate striking to get a unanimous decision win over Chris Curtis, more to come from London in a bit.

Going into Saturday, Pimblett said one of the main reasons he accepted the fight was that he wanted to put on another show in England before the UFC likely books him to pay-per-view events in the U.S. Well, it was quite a show he put on.

Pimblett, of Liverpool, submitted Leavitt via rear-naked choke at 2:46 of the second round. He took Leavitt down and started working on a choke. An elbow to the side of Leavitt’s head loosened his guard and allowed him to secure it for his fifth consecutive finish.

Leavitt, of Las Vegas, said in the buildup to the fight he wanted to test Pimblett on the floor, and he went for takedowns early. It mostly resulted in the two lightweights tied up in a stalemate along the fence, although Leavitt did get him down and gain some control time in the first round. Pimblett reversed the position late and ended the round on top.

The second frame was all Pimblett, as he came out throwing hard shots on the feet. He successfully secured his only takedown attempt of the fight shortly into the round and worked to the finish.

Immediately after the bout, Pimblett dedicated the win to a four-year-old boy he’s befriended during his battle with cancer, who passed away this year. He also dedicated it to his late friend, who took his own life this week.

Pimblett said he would like to fight again before the end of the year, most likely in Las Vegas.

Krylov maybe isn’t the fun, highlight-reel finishing prospect he once was. But, despite a rough stretch of late, there’s no doubt he can still be a threat in the UFC light heavyweight division.

Krylov absolutely throttled Gustafsson en route to a knockout win at 1:07 of the first round. Krylov dropped Gustafsson early with an overhand right, then finished with a booming left hook as Gustafsson went for a single-leg takedown. Krylov finished up with ground and pound and that was it.

“It’s the biggest name [I beat] in my career,” Krylov said in his postfight interview. Afterward, Krylov also called out Volkan Oezdemir for UFC 280 on Oct. 22 in Abu Dhabi.

Krylov, 30, snapped a two-fight losing streak with the victory. The Ukraine-born fighter who fights out of Russia has 27 finishes in 28 career pro wins. This was his ninth finish in the UFC. Gustafsson, a 35-year-old Swedish fighter, has lost four straight after being a perennial top contender at 205 pounds in the UFC, including earning three title shots.

She did it again. Four months after McCann set the O2 Arena on fire with a spinning back elbow knockout in March, she repeated the strike against Goldy. Referee Herb Dean stopped the fight at 3:52 of the second round.

The finishing sequence began with a right hand across Goldy’s chin, which left her dazed. McCann followed with the spinning back elbow and then a flurry of shots that dropped Goldy to the canvas.

McCann, of Liverpool, has now won three in a row, which matches her longest winning streak in the UFC. It’s her sixth win in the UFC’s flyweight division, which is good for fifth all-time. Immediately after the result, she leapt over the Octagon and celebrated with the English crowd.

Goldy, who fights out of Florida, drops to 1-3 in the UFC. She signed with the promotion after an appearance on Dana White’s Contender Series. This is the first time in her career she’s been knocked out.

It was clear from the very beginning of the fight what Craig wanted to do: take the fight to the ground at all costs. That meant dropping down when it appeared like he got hit and trying to pull Oezdemir into his guard.

To Oezdemir’s credit, he mostly stayed out of precarious positions despite Craig’s best efforts in a unanimous decision (30-27, 30-27, 30-27) victory. Craig spent the entire fight trying to pull Oezdemir down to the mat with him and Oezdemir was able to escape most times and land some offense in the process.

“You really have to give 100% when you face him,” Oezdemir said. “I just did what I had to do, what the game plan was, what the coach told me to do it. And it worked out fine.”

Craig’s best round was the first. He dragged Oezdemir down and was going for a leglock for a time. Oezdemir was able to escape and land an elbow that opened up a cut on Craig’s hairline. Craig finished the round strong with a left hand and right head kick.

In the second round, it was much of the same with Craig trying to pull Oezdemir down to his domain. Oezdemir was able to defend and land shots on the feet when the men were upright. At the end of the round, he landed some hard ground and pound when Craig jumped guard. Craig had one last chance on the ground in the third, going for an omoplata, but it was unsuccessful.

Oezdemir, 32, snapped a two-right losing streak with the workmanlike victory. The Switzerland-born fighter of Turkish descent trained for this camp at All Stars Training Center in Sweden. Craig, a 34-year-old Scotsman, had a six-fight unbeaten streak snapped in what was a lackluster performance.

Klein, of Slovakia, went into this contest a relatively significant underdog, but he sure didn’t look like one once things started.

Klein beat Jones rather convincingly over the course of three rounds, collecting unanimous judges’ scores of 30-27. He dropped Jones with a counter right hand in the second round, and racked up more than six minutes of control on the ground.

Jones, of Wales, was favored at betting odds of around 4-to-1, but he looked sluggish on the feet and struggled to get off his back any time Klein put him down. Klein landed some big hammerfists in the second round after the knockdown, and short shots in the third to leave no doubt on the scorecards.

Klein improves to 3-2 in the UFC. Jones, 28, has had a bit of a rough go inside the Octagon. He’s 1-2 with a no contest against Alan Patrick due to an accidental eye poke.

Diakiese was once known for his kickboxing prowess. He had several highlight-reel knockouts that earned him a spot in the UFC. Now, though, it’s very clear his game has evolved a great bit.

Using almost exclusively his wrestling and top game, Diakiese dominated Hadzovic via unanimous decision (30-26, 30-26, 30-27). Diakiese took Hadzovic down in every round and Hadzovic simply could not deal with Diakiese’s pressure and aggressive wrestling.

Diakiese’s best strike was a right elbow in the clinch against the cage right at the second-round bell. Hadzovic’s corner asked him to go for the finish in the third round, knowing he was down on the cards. But once again, Diakiese used his wrestling to ground and frustrate his opponent.

Diakiese, 29, has won two straight following a two-fight losing streak. The Congo-born England resident is now 7-5 in the UFC. Hadzovic, a 35-year-old Yugoslavian-born Denmark resident, has dropped three of four.

Making his first appearance in nearly two years, Wood looked dominant in a decision win over Rosa. All three judges had it a shutout, via scores of 30-26, 30-26 and 30-27.

Wood, 28, has fought at bantamweight previously, but he looked very comfortable at his new weight. He pressured Rosa with hard low leg kicks, and bloodied his left eye with punches in the second round. Less than five minutes in, Rosa appeared to have trouble putting weight on his lead leg, and was slow to get up after knockdowns in the second and third rounds.

Fighting out of England, Wood was considered a bright prospect earlier in his career, but some inactivity and two losses in a three-fight stretch in 2020 took away some of his steam. He improves to 5-2 with the victory, while Rosa has lost four of his last five.

Don’t look now, but Pearce has developed into a real factor in the featherweight division.

Pearce dominated the game Amirkhani en route to a TKO victory at 4:10 of the second round. While Amirkhani had some success in the grappling early, Pearce was the superior fighter in top position, posturing up and landing big ground-and-pound shots on Amirkhani until referee Dan Movahedi stepped in to stop it.

Amirkhani was the aggressor in the first round, trying to take things to the ground where he could work his creative choke game. But Pearce was quick with elbows to the temple when Amirkhani went for single-leg takedowns. Amirkhani was bloodied early into the fight, though he did have some submission attempts in the first.

In the second, Amirkhani seemed tired from the energy he expended in the first round. He landed some good punches on the feet, but Pearce was the fresher fighter. He took Amirkhani down, got into dominant position and poured on a barrage of offense leading to the finish.

Pearce, 30, has won four straight since moving down to featherweight in November 2020. The Tennessee product, who trains out of Fight Ready MMA in Arizona, has three finishes during that streak, too. Amirkhani, a 33-year-old Iran-born Finland resident, has dropped four of five.

Mokaev, 21, cruised to unanimous 30-27 scorecards by simply controlling Johnson against the fence. He repeatedly attempted to get Johnson to the floor but was mostly unsuccessful. Rather than break away, however, he remained in the clinch.

There was an exciting suplex in the final round, and Mokaev briefly used the slam to take Johnson’s back, but the 31-year-old veteran calmly worked out of the position. According to UFC Stats, Mokaev attempted 26 total takedowns and converted 12.

It was a bit of a lackluster performance after his UFC debut in March, when he submitted Cody Durden in just 58 seconds. His record remains perfect, though. Johnson fell to 0-1 in the UFC.

Herbert, 34, gutted out a big win over Nelson on Saturday, as the English fighter has now won two of his past three matches in the UFC. Herbert’s ability to strike from distance helped him keep command of the fight throughout. Nelson, 31, drops to 1-4 in the UFC.

In her first UFC win, Leonardo dominated in all three rounds to earn the victory over Bohm. Leonardo lost her first two matches in the UFC by TKO after earning a contract on Dana White’s Contender Series in November 2020. Bohm is now 0-2 in the UFC.

Silva came on strong early in Round 1, landing a takedown and keeping the fight on the ground. However, Dalby recovered and in Rounds 2-3 kept the fight standing and landed multiple strikes on his opponent. Dalby’s pressure wore down Silva, who fatigued in the later rounds and was less effective by the end of the match.

Dalby, 37, earned the third UFC win of his career. Silva, 39, has now lost three in a row, all by unanimous decision.