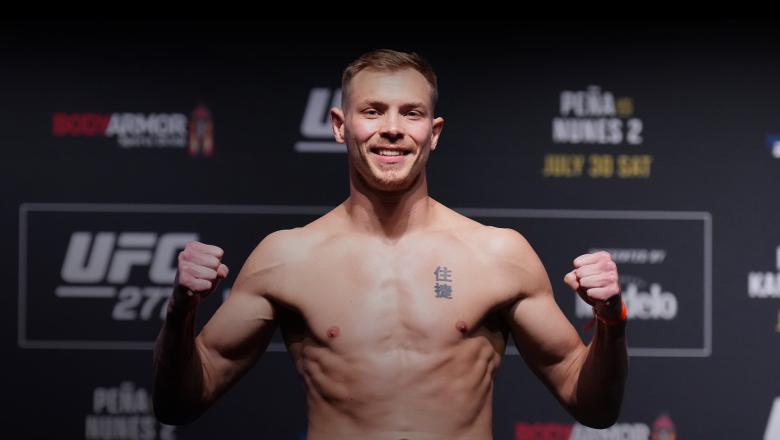 It’s not easy to do, training and working everyday with no light at the end of the tunnel in the form of an opponent and a fight date. And Fugitt went through more than just a few months of that grind – more like 27 months.

“I feel like I’ve been turned away and forgotten numerous times in this sport,” he said. “I went through a full pandemic where I didn’t know if fighting was even gonna happen again for me, only to wake up the next morning and say, it’s time to put the boots on, it’s time to go to work and do the only thing that keeps me grounded and keeps me going, and that’s training and preparing. I spent basically two years lying in wait and hoping that I finally got put in front of the right crowd and the right people to earn this shot.”

In February, he got that shot and made the most of it, shocking hot prospect Solomon Renfro with a 43-second knockout. The call to the UFC wasn’t immediate, but it at least put the welterweight on the radar. And yeah, getting those three letters on his gloves is a big deal.

“It’s a dream come true, to be honest,” Fugitt said. “And I’m not one of these motivational Instagram people. (Laughs)

“No, I’m not putting memes up. I train and I love this sport because it’s what makes me whole and what keeps me going. I believed that if I put myself in front of the right people and was seen by the right people, I’d get my shot. But as far as some of these motivational people, I’m hearing what you’re selling, but when’s it gonna happen for me? I’ve been working a while. I finally got those letters, and it feels good.”

Josh Hill believes he’s ‘more well-rounded than Bellator 284 opponent Marcos Breno
Bellator rebooks Pico-Kennedy bout for October
Devin Clark Is On The Right Path
Nickal a Contender Series W away from UFC deal
Bantamweight breakdown: What Vera, Cruz, Aldo, O’Malley and others need in order to get a title shot