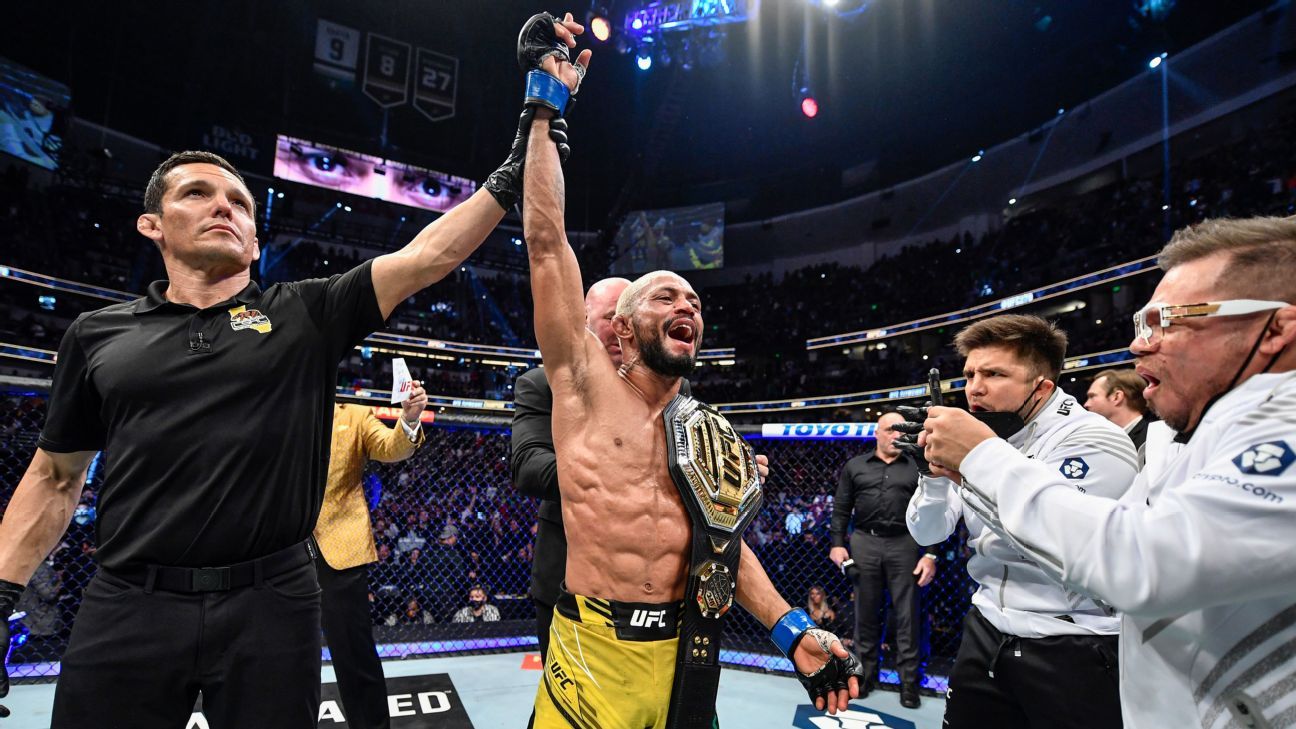 DALLAS — Deiveson Figueiredo says he’s almost fully healthy and is targeting a return to the Octagon this winter.

Figueiredo, the UFC flyweight champion, has been out since January with injuries to both hands and a bruised knee. With him out, the UFC made an interim title bout between former champ Brandon Moreno and Kai Kara-France, scheduled for Saturday night in the co-main event of UFC 277 here at American Airlines Center.

Figueiredo, who flew in Thursday from his native Brazil to watch the fight, told ESPN that his health is at “95 percent” and he believes he can return to fight the Moreno vs. Kara-France winner as early as December or January.

Amanda Nunes will try to recapture the UFC bantamweight title against Julliana Peña, and Brandon Moreno and Kai Kara-France fight for the interim flyweight title.

Figueiredo previously said he wasn’t a big fan of the idea of an interim title while he is sidelined, but he said he’s looking forward to watching the bout Saturday.

“It’s a great marketing plot on the part of the UFC to set up a great fight between two great fighters,” Figueiredo said through an interpreter. “We know this is not the real belt. But it’s a great way to unify the titles. At the end of the day, the champion from now is going to have to fight the real champion, which is me. So, it all works out.”

Figueiredo said he isn’t really sure who will win Saturday, but he’s intrigued by Kara-France.

Figueiredo and Moreno have already fought three times, though there is unfinished business. Figueiredo won the third fight in January to take the title. Moreno took the title in the second fight last year. And in 2020, in their first contest, the fighters went to a draw.

Though he said it doesn’t matter ultimately who he faces, Figueiredo is more interested in a matchup with Kara-France, the slick-striking New Zealander.

“Kai Kara-France is a guy I really want to fight,” Figueiredo said. “I’ve fought the best in the division, I’ve gone through them. I think it would be a great fight to fight Kai Kara-France next.”

Figueiredo (21-2-1) has just one loss in his past seven fights. He owns two successful UFC flyweight title defenses and is tied for the most finishes (7) in UFC flyweight history, with longtime champion Demetrious Johnson.

During his time off, Figueiredo said he has made changes in his life and camp. He left manager Wallid Ismail and signed with Vayner Sports and is now training at ChuteBoxe in Sao Paulo, Brazil, under coach Diego Lima. Figueiredo, 34, will be training with top UFC lightweight Charles Oliveira.

“Life is made out of changes,” Figueiredo said. “I just wanted to eliminate things that were not doing me good and doing me a good service. I just want to be around things that are healthy for me, for me to become and be the champion I am.”