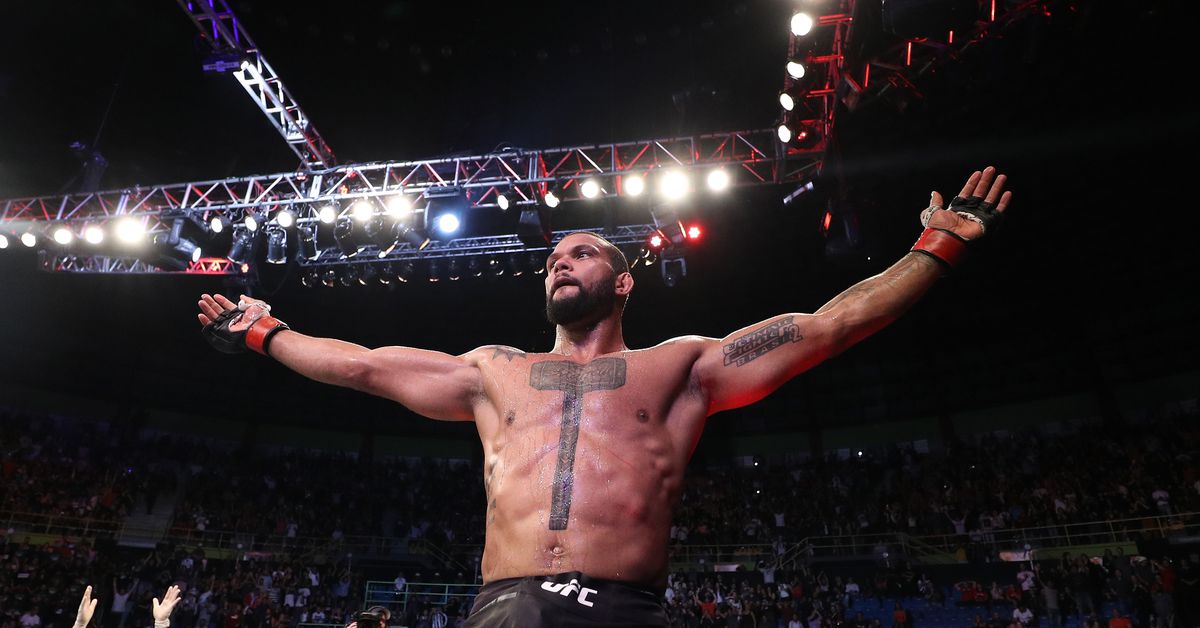 As a long-time Santos fan, his performances post-Jon Jones knee destruction have honestly been sad. It’s not surprising that such a devastating injury suffered in the latter half of his 30s produced a negative change, but the change has been so drastic. Santos went from one of the most chaotic strikers alive to a hesitant, low-volume range kicker. Unless he’s able to tap into that previous rage, Santos is probably going to get knocked out this weekend, because Hill hasn’t been taking prisoners.

Let’s take a closer look at his skill set:

LIGHT HEAVYWEIGHT CONTENDERS COLLIDE! Ultimate Fighting Championship (UFC) returns home to UFC Apex in Las Vegas, Nevada, on Sat., Aug. 6, 2022, with a thrilling Light Heavyweight contender bout that will see No. 6-ranked Thiago Santos take on No. 10-seeded Jamahal Hill. In UFC Vegas 59’s co-main event, No. 6-ranked Welterweight contender, Vicente Luque, will lock horns with No. 13-seeded contender, Geoff Neal, in a pivotal match up. Also on the card, The Ultimate Fighter (TUF) 30 Finale matches are set as Mohammed Usman and Zac Pauga battle at Heavyweight and Brogan Walker and Juliana Miller face off at Flyweight with UFC contracts on the line.

Santos doesn’t shut people off with one kick at 205 pounds like he did at Middleweight. Fortunately, his hands might actually be more powerful to make up for it.

Most of the time, Santos fights from the Orthodox stance, but he’ll switch to Southpaw often enough. Santos punches plenty hard and loves to leap in with a pair of heavy hooks. He will eventually play on the threat of his looping shots by trying to place an uppercut straight through the guard, but it’s rarely more complicated than stringing together power shots until one slips through.

Take a look at the finishing sequence from his knockout win over Jimi Manuwa (GIF), for example. This is not technical boxing — Santos is winging punches and falling all over the place. At the same time, he’s not completely without process. Santos is in good cage position, and the pace he’d previously set was so absurdly high that no one could expect to remain perfectly technical. Lunging shots or not, Santos managed to pull away from Manuwa’s shots, switch from his usual Orthodox to Southpaw, and fire different looping punches around Manuwa’s high guard.

Santos’ kicking remains a great asset even if it’s not stopping foes in their tracks immediately. One clean kick remains a fight-changing experience. A major weapon for Santos is definitely the switch kick. Switching his feet quickly, Santos will power through a left kick to the body or head of an orthodox opponent. Usually, this power kick is set up by a few quick switch kicks to the inside of the leg.

Santos has a few other ways to set up the power left kick though. At times, he will fully switch to Southpaw before shuffling forward directly into a full power kick. That shuffle is very important, as it allows Santos to close distance and load up the kick. If his opponent tries to back away — wouldn’t you back away from Santos suddenly pushing forward quickly? — it benefits the Brazilian, who will end up in perfect position to land with the shin. Alternatively, Santos will take a step back from Orthodox into Southpaw, and when his opponent steps forward to fill that space, he’ll fire the kick.

Santos’ strike selection is smart. His left leg is his biggest weapon, and he adjusts to his opponent’s stance well. Against Orthodox foes, he’s going to target the body and head with his quick switch or by fully committing to the Southpaw switch before firing. Against a Southpaw like Eryk Anders, Santos will more actively chop to the available lead leg with his left and throw his right kick more often to the open side.

In many of his recent fights, Santos has showed a new patient approach, and the most successful outcome came vs. Jan Blachowicz. Rather than try to overwhelm the Polish fighter, Santos hung back and worked his right low kick, really digging into the calf. The first round was close, but Santos’ patient attrition work built up and saw him begin to take over in the second. When Blachowicz charged forward in the third, a pair of counter hooks ended his night (GIF).

Santos attempted a similar game plan against Jones! Hanging back, Santos circled and fired power kicks at the legs, confident that he could do more damage with his round kicks than Jones’ arsenal of rangy kicks. For a time, he was largely correct. Any time Jones really stepped forward, Santos would swarm with a huge volley of power shots to keep his foe away.

Until the leg disintegrated, it was working quite well.

Since those bouts, Santos has largely failed to balance aggression and activity. The first eight or so years of his career saw him chase the finish with rare zeal, for better or worse. Since then, Santos refuses to commit to many strikes even at distance, and he doesn’t really have the defense to consistently win on such small margins.

Men like Magomed Ankalaev and Aleksandar Rakic are quality kickboxers, but there’s no reason that Santos couldn’t have taken a few more chances and actually given himself a chance to win. He threw so little that he was basically only going to win if the absolute perfect single shot landed, and that’s just not very likely.

For most of his career, wrestling has been a dirty word for Santos, as defensive grappling in general is responsible for most of his career losses. However, his defense has come a long way over the years, particularly as Santos has grown to be a more physical fighter.

Against a short-notice replacement and smaller man in Kevin Holland, Santos had little trouble over-powering him with double legs along the fence. Generally, the sequences went something like this: stun Holland with a punch or kick, flurry along the fence, dump him with a double leg takedown, and then pound away. Somehow, Holland survived the assault(s), but it was a nice little display of well-rounded violence from the Brazilian. Against bigger men in Anders, Blachowicz, and Manuwa, Santos was still able to find success in distracting foes with a wild exchange before tackling the legs along the fence.

Defensively, Santos’ biggest issue was that he got way too wild. When kicking at range, Santos is powerful and denies takedown entries easily — good luck trying to catch that guy’s kick! It’s when he rushes forward and abandons stance that Santos struggles with giving up top position. Against Anthony Smith, for example, Santos rocked his foe with a spinning kick and attempted to follow up with a flying high kick. It sort of landed, but Santos also flew by right past “Lionheart.”

Since he’s grown stronger at Light Heavyweight and is far less active, takedowns have largely been a non-issue. The sole exception is Glover Teixeira, who only scored top position after nearly getting knocked out on a couple occasions, but that’s his specialty technique!

Outside of an arm triangle attempt opposite Holland, Santos doesn’t do jiu-jitsu … he elbows the hell out of people.

Santos’ defensive jiu-jitsu shares the same problem as his defensive wrestling. At this point, Santos is definitely technically capable of defending himself. He survived some very bad positions opposite Gerald Meerschaert, for example, which is impressive considering “GM3” holds 26 career victories via tapout.

In that bout — and in other examples like when mounted by Smith — Santos was patient and waited for his moment to explode out. Other times, Santos just tries to yank away and stand up far too quickly, which is what allowed Eric Spicely to climb onto his back and choke him out.

As for the more recent Teixeira loss, well, that man is an expert from mount and back mount.

Santos is in pretty dire need of a win, or at least an exciting performance. As it stands, he’s neither winning nor exciting, so a fifth loss in his last six fights could easily see him released even if Santos is currently ranked inside the Top Ten.

Andrew Richardson, a Brazilian jiu-jitsu brown belt, is a professional fighter who trains at Team Alpha Male in Sacramento, California. In addition to learning alongside world-class talent, Andrew has scouted opponents and developed winning strategies for several of the sport’s most elite fighters.

Remember that MMAmania.com will deliver LIVE round-by-round, blow-by-blow coverage of the entire UFC Vegas 59 fight card right here, starting with the ESPN/ESPN+ “Prelims” matches, which are scheduled to begin at 7 p.m. ET, then the remaining main card balance (on ESPN/ESPN+) at 10 p.m. ET.

To check out the latest and greatest UFC Vegas 59: “Hill vs. Santos” news and notes be sure to hit up our comprehensive event archive right here.