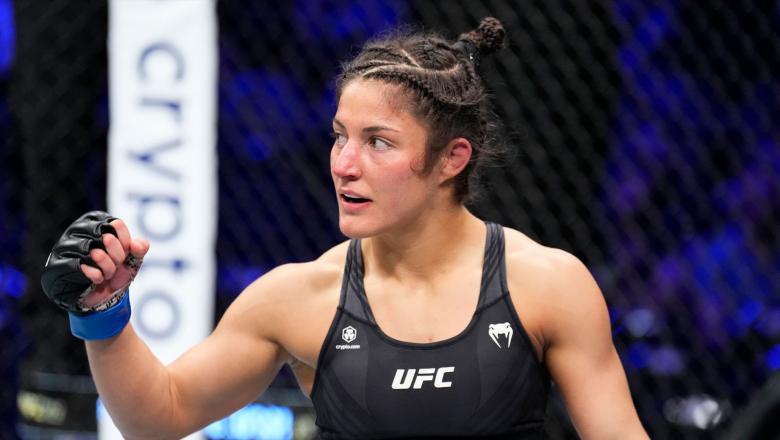 Godinez gets her biggest opportunity to date this weekend, facing off with tenured strawweight veteran Angela Hill in a bout that could catapult her into the rankings.

The 28-year-old Mexican-Canadian had an impressive rookie campaign in 2021, fighting four times in eight months, including on back-to-back weekends, going 2-2 with a split decision loss to Jessica Penne in her debut and a unanimous decision setback up in weight in the second half of her October doubleheader.

2022 has been comparatively quiet for Godinez, as she’s fought just once, turning in a dominant effort opposite Ariane Carnelossi at UFC 274 in May. Now she makes her second appearance of the year, stepping in with a ranked opponent on her home turf, eager to show she’s ready to hang with the best in the division.

Stylistically, this is a solid matchup for Godinez, who is a powerhouse with impressive grappling skills, having collected 23 takedowns in her first five trips into the Octagon. Hill’s takedown defense has been solid throughout her career, and she’ll be working with a three-inch reach advantage, but if the Titan MMA representative can work inside, we could see “Overkill” go for a ride once or twice.

This is the right type of assignment for the ascending and clearly talented Godinez, especially coming off such a one-sided win over Carnelossi earlier this year. Hill is one of those fighters that is far better than her record in the UFC suggests and is tough to put away, let alone dominate, so it would be quite a statement for Godinez to roll into her hometown of San Diego and put it on her this weekend.