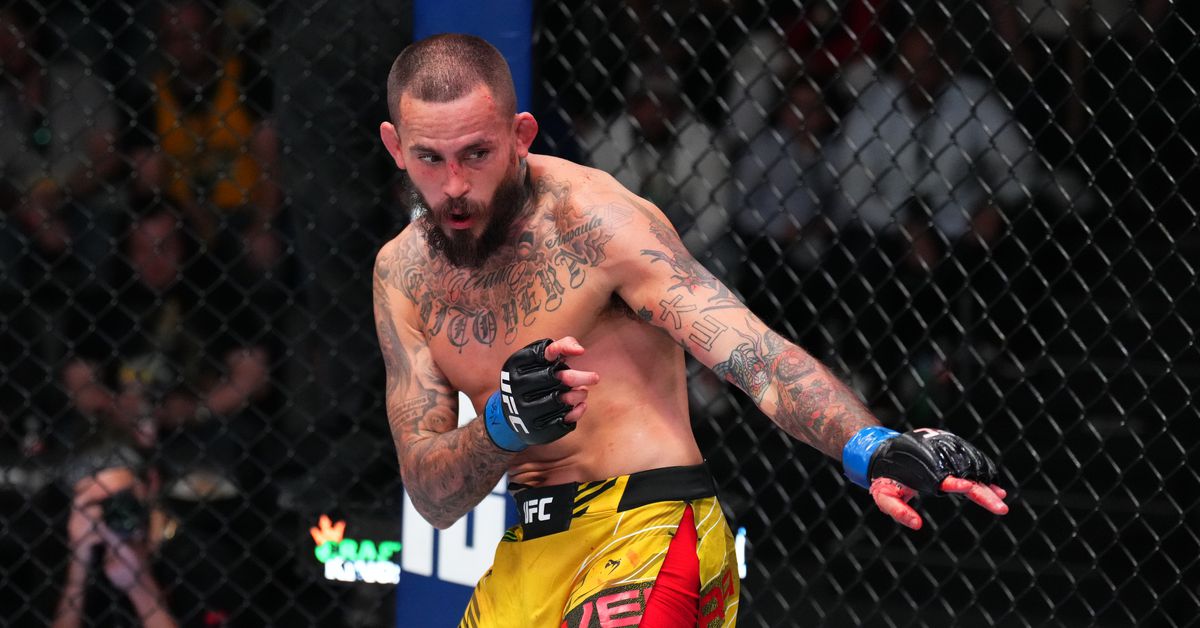 Marlon Vera has the chance to join some elite company.

With a win over Dominick Cruz in Saturday’s UFC San Diego main event, “Chito” will join Henry Cejudo, Cody Garbrandt, and Urijah Faber as the only fighters ever to claim a victory over the former UFC and WEC bantamweight champion. Cruz remains one of the trickiest stylistic puzzles in all of MMA and should Vera beat him, it will not only be an incredible achievement to add to Vera’s own legacy, it will move him one step closer to the top 5 spot that he has been chasing for years.

At this point in his illustrious career, Cruz is fighting for survival. He keeps finding ways to win, but the 135-pound division grows deeper and deeper with every passing year and it feels like it’s only a matter of time until Cruz tumbles into the abyss (or into a lucrative full-time analyst gig, but you get the idea). How much longer can he stay one step ahead of the competition? He’ll have 25 minutes to make a statement on Saturday.

In other main card action, featherweights Nate Landwehr and David Onama meet in a bout that’s sure to produce a highlight or two, highly touted Combate Global strawweight standout Yazmin Jauregui makes her UFC debut against fellow newcomer Iasmin Lucindo, Devin Clark returns to light heavyweight to face the undefeated Azamat Murzakanov, Ariane Lipski and Priscila Cachoeira finally get to square off after a slight delay, and middleweight finishers Gerald Meerschaert and Bruno Silva collide in the opener.

Where: Pechanga Arena in San Diego

Dominick Cruz just doesn’t avoid damage like he used to.

Picking Cruz fights was easy once upon a time. You knew the dance he’d do, the spell he’d cast on his opponents, the frustration he’d cause not just to the man standing across from him but for detractors of his style praying for his downfall. You knew he’d win.

Today’s version of Cruz is hittable, which is a problem when you’re dealing with someone that hits as hard as Marlon Vera. As we’re often reminded, damage wins fights and Vera dishes it out as well as anyone in the bantamweight division. This matchup could play out like the Rob Font fight, with Cruz racking up significant strike numbers while Vera lands the most impactful shots of the fight. Were this prime Cruz, I could see Vera catching nothing but air as he advances, but his aggressive style is the perfect foil for this version of “The Dominator.”

Defeating Cruz is still a big deal, so don’t think Vera can just show up and coast through this matchup. He’ll need to put on one of the best, most complete performances of his career especially if this fight extends to the championship rounds. I see it going the distance with Vera winning a convincing decision.

For better or for worse, there’s no such thing as a boring Nate Landwehr fight.

The “for worse” part comes from the fact that Landwehr is a master of throwing caution to the wind, so when he’s not drawing his opponents into all-out wars, he’s getting bolted in half a round or less. It’s not great for his long term prospects, but you know that the UFC appreciates his do-or-die style. It’s that same style that could mean big trouble for Landwehr against Onama, who has won all of his fights by knockout or submission and has yet to lose at 145 pounds.

Consider “for better” though. Onama hasn’t gone past the second round against an opponent with Landwehr’s experience yet, so the deeper this goes you have to like Landwehr’s chances of pulling off an upset. It’s a long shot, but Landwehr has been in some absolute dogfights and shown he can win them too.

There’s a youth and athleticism edge here that has me leaning towards Onama, not to mention Landwehr’s aforementioned recklessness. “The Train” has to escape early trouble to make this his fight and I don’t know if that’s possible against Onama, who has all the makings of another contender in the loaded 145-pound division.

There’s plenty of hype around Yazmin Jauregui, who enters her first UFC fight with an 8-0 record and a handful of highlight-reel knockouts. Iasmin Lucindo is stepping in on a month’s notice as a replacement for an injured Istela Nunes and she definitely presents a style challenge.

Just 20 years old, Lucindo already has 17 pro bouts under her belt, but her scouting report is still relatively simple and her strategy should be the same for this fight: close the distance against the longer Jauregui, fight for a body lock, trip, and neutralize. Outside of that, her chances of winning on the feet are slim against the slick and hard-hitting Jauregui.

Jauregui, a still-developing prospect herself at 23, is always looking for offense, only taking a back step when absolutely necessary. She’ll have to be more tactical in her UFC debut to not fall into Lucindo’s grappling traps, but even if she is taken down she has shown she’s quick to get back to her feet.

Look for Jauregui to pick Lucindo apart from range before finishing with strikes in Round 2.

If Devin Clark can’t get this one to the ground, it’s going to be a rough night for him.

The last time Clark was matched up with a powerhouse knockout artist, it didn’t end well. Ion Cutelaba stuffed his takedowns and battered him for three rounds. Azamat Murzakanov probably won’t let it get that far.

Murzakanov is light on his feet for a big guy, though he is shaky defensively so he can’t get cocky against Clark. The good news is that he’s exhibited a steady, consistent demeanor in his career thus far and though he’s known for fast finishes, it’s due to his outstanding instincts not a tendency to rush in without thinking. It’s possible that Clark’s UFC experience pays dividends here though and he can find a way to grind out a win.

I’m all in on Murzakanov, so this feels like he’s about to deliver a finish in the first or second.

(This matchup was pushed back a week from UFC Vegas 59, so my prediction remains the same. Below is a slightly modified version of last week’s prediction).

Other than the odd weight miss last week, there’s no reason to lose faith in Ariane Lipski in this matchup. She’s a better technical striker than Priscila Cachoeira and she should be able to take Cachoeira down at will. Cachoeira presents a challenge to anyone that accepts a brawl with her, but even then it’s not as if she’s such a high-volume striker that she can just overwhelm Lipski.

The other nod I’ll give to Cachoeira is that she has legitimate power, which Lipski has to be mindful of. Lipski doesn’t have a history of getting rocked on the feet, so look for her to avoid Cachoeira’s haymakers and pick her apart with counters or put her on her back if Cachoeira starts to have any success with her hands.

Cachoeira eked out a decision win in her most recent outing, but Lipski will take the judges out of the equation on Saturday when she scores a submission win.

Gerald Meerschaert and Bruno Silva can both take time to get their offense going, but there’s a better chance that “Blindado” comes out firing than Meerschaert does.

Simply put, it behooves Silva to go for an early finish rather than give Meerschaert a chance to figure out the range and establish his grappling game. Meerschaert is vulnerable to being overwhelmed early in a fight and Silva has more than enough firepower to exploit that weakness.

On the flip side, Meerschaert can exploit Silva’s most notable weakness, his submission defense. All five of Silva’s career losses have come by way of submission, Meerschaert owns 26 career submission wins including a record eight in the UFC middleweight division. You do the math.

Silva definitely knows how to survive on the ground, but I don’t know if he’s ever faced someone who is as relentless as Meerschaert when it comes to hunting for a finish from an advantageous position. Still, Silva’s distance control should keep him out of danger for the most part until he can get his hands going.

Meerschaert is often at his best when he’s being counted out, so hopefully he can look back on this pick as motivation should he score the upset win here.