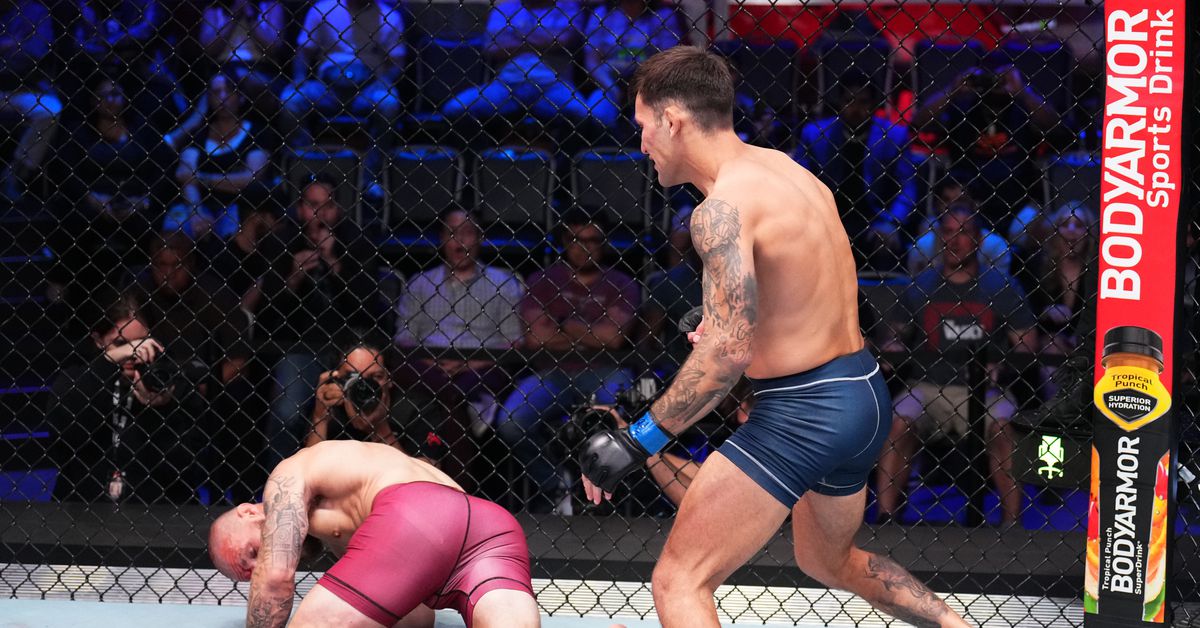 In the lightweight headliner of DWCS Season 6, Week 4, Ribovics just needed 90 seconds to dispatch of Thomas Paull to move to 11-0 in his professional career, and more importantly, earn a UFC contract in the process.

Ribovics came out firing, which Paull was more than happy to engage with until an accidental low blow landed about 15 seconds into the fight. As the action resumed, the leather continued to fly from both men. A cut opened up above the right eye of Paull before Ribovics landed a thunderous right hand that faceplanted Paull. Ribovics landed a few follow-up shots and the fight was called by Jason Herzog at 1:30 into the opening round.

In the middleweight co-main event, Claudio Ribeiro landed a leg kick, before absolutely hammering Ivan Valenzuela with a tremendous left hook and the fight was done just 25 seconds after it began.

The finish, which had Dana White jumping out of his seat, enters the history books as the fourth fastest knockout in DWCS history and gave Ribeiro his sixth straight stoppage win.

The anticipated bantamweight matchup between Cage Warriors champ Jack Cartwright and Jose Johnson was frenetic from the get-go.

Cartwright took Johnson’s back less than a minute into the second, but the latter scrambled into a better defensive spot. Cartwright wasn’t busy enough, which forced referee Mark Smith to stand them up before Cartwright immediately shot for another takedown. This time, Johnson created a scramble and landed a beautiful body shot and a right hand — that is, until Cartwright landed another takedown. Much like the first, Johnson ended the round on top, landing the impactful strikes.

That momentum carried into the third round where Johnson closed strong and got the unanimous decision win in his second DWCS opportunity, handing Cartwright his first pro loss in the process.

Hailey Cowan got off to a great start, but ultimately had to hang on against a game Caludia Leite.

The second round saw a massive momentum swing for Leite as she got on top of Cowan and nearly submitted her on more than one occasion. Cowan was able to survive a tight arm triangle submission to make it to the third.

Cowan got a crucial takedown in the third round and landed some right hands before attempting to trap the arm of her opponent. Cowan moved to mount and took the back, but Leite capitalized on Cowan’s overzealousness to get on top — which is where she stayed for the remainder of the fight. In the end, Cowan was awarded the split decision nod.

In the lightweight opener, Serra-Longo’s Nazim Sadykhov outworked Team Alpha Male’s Ahmad Hassanzada over the first two rounds before landing a ferocious overhand right knockout in the third round.