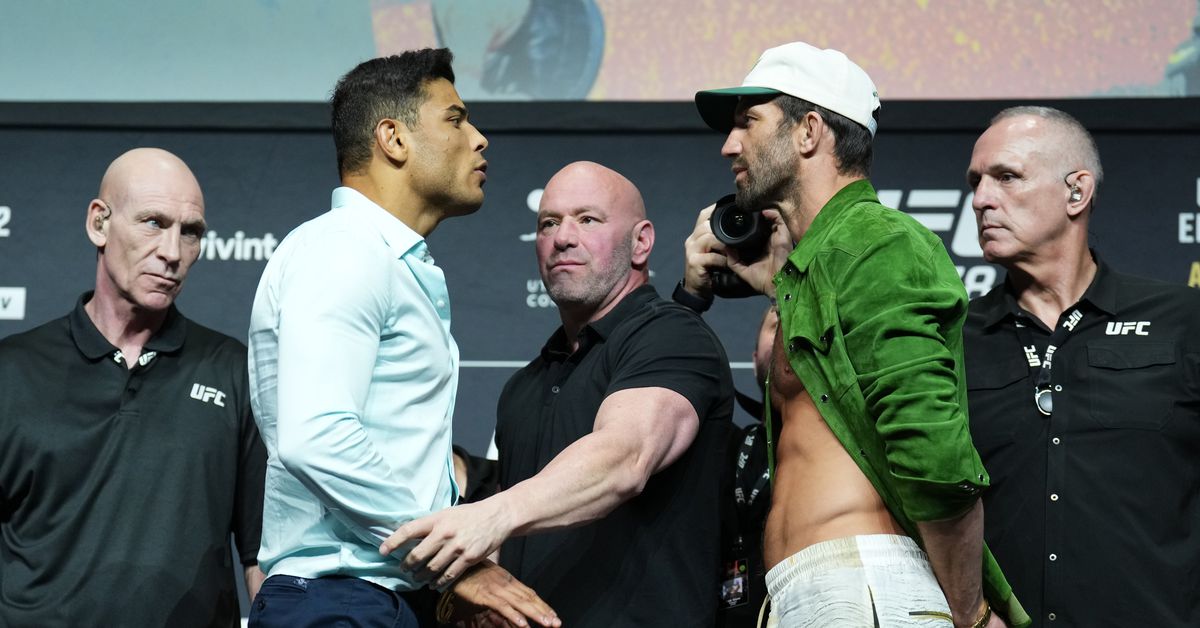 It’s been more than three years since Luke Rockhold appeared on stage at a UFC press conference, but the one-time middleweight champion made up for lost time in an expletive-filled tirade aimed at opponent Paulo Costa.

Rockhold, the co-headliner of Saturday’s UFC 278, seized main event status during his exchanges with Costa, first accusing the Brazilian of doing everything possible to avoid this fight.

“This motherf****** didn’t want to take the fight in the first place,” Rockhold said. “The UFC forced it down his throat and then he delayed it twice, month after month and all the cosmetic bulls*** he got done. You little b****, shut up.”

Costa was all smiles in response as he scoffed at Rockhold’s claims while mocking the tone of the rhetoric coming from his 37-year-old opponent.

“He can say this bulls***. I don’t feed on an older man like he is. It doesn’t matter on the day of the fight. We will be close in the same cage, just me and him and we will see who has more energy, who has more power and more will to win this fight.”

UFC President Dana White dismissed a reporter’s question about whether Rockhold’s accusation was true, countering, “who gives a s***? They made it here.”

During a later exchange, Costa mocked the outfit that Rockhold wore onstage, adding the ex-champ was trying to dress like a “teenager.” The veteran American Kickboxing Academy fighter fired back.

The back-and-forth didn’t slow down – Rockhold did his part to fire back at nearly everything Costa had to say on the microphone.

One particularly heated moment came when Rockhold questioned Costa’s will to win in the face of adversity. The ex-champ asked him how much he weighed less than 24 hours before they are set to step on the scale with a goal of hitting 186 pounds or less.

Costa, who spoke only in English during the press conference, simply fired back with a “f*** you” to Rockhold before offering his prediction on how their fight will end.

“I’m on my primetime,” he said. “I will f*** this old man up on Saturday. He is visibly uncomfortable because he knows he will face a monster. He knows already. Look at him, He’s uncomfortable. I will retire him on Saturday.”

Once the press conference wrapped, Costa and Rockhold stomped toward each other on stage with UFC President Dana White ready to stay between them. No altercation happened, however, as Costa told Rockhold “be cool” as they came face-to-face for the first time during fight week.

The middleweights will have one more staredown on Friday at the ceremonial weigh-ins before finally clashing in the cage on Saturday at UFC 278.