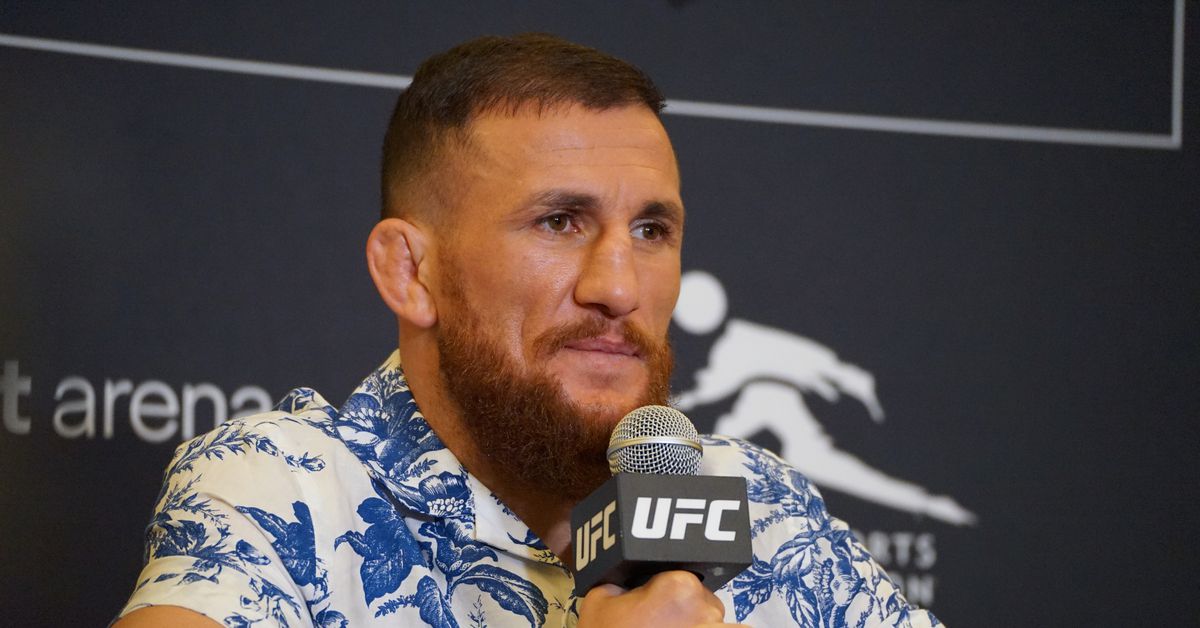 It was a long wait for Merab Dvalishvili to get an opponent after his stunning comeback win over Marlon Moraes that put him near the top of the UFC’s bantamweight division.

When the call finally came from the UFC matchmakers, the 31-year-old Georgian fighter was admittedly surprised after hearing the name Jose Aldo as the offer.

“It’s amazing,” Dvalishvili told The Fighter vs. The Writer. “I wasn’t expecting this. Jose Aldo, he’s a legend. I was thinking everybody else but not him. UFC gave me him for my next opponent and I’m ready to go.

“He’s just another fighter, another opponent for me and I’m just going to go and fight hard. We’ve got to show people a good fight.”

During Dvalishvili’s extended layoff over the last 11 months, many names were suggested as potential opponents including former UFC bantamweight champion Petr Yan after he engaged in back-to-back fights against Aljamain Sterling.

Of course, Dvalishvili counts Sterling as one of his closest friends and teammates so extending that rivalry with Yan might have seemed like a natural fit but it turns out the Matt Serra and Ray Longo trained fighter would much rather see somebody like Aldo standing across the cage from him.

“I have a legend opponent in Jose Aldo,” Dvalishvili explained. “This is perfect for me. Why do we have to talk trash? He’s a legend, I have respect for him. He’s the best and he’s going to try to kick my ass but we will see. He don’t do anything bad to me, he’s just an opponent. It’s a sport. We’re going to just go in and fight each other.

“Petr Yan, he’s a piece of s***. Whatever. I don’t want to talk about him. He’s in Russia and I hope he gets locked there and never comes to the U.S.”

Since Dvalishvili got Aldo, it was Sean O’Malley who ultimately drew Yan as an opponent for UFC 280 in October in another pivotal bout at 135 pounds.

When looking ahead at what that particular matchup might do for the division, Dvalishvili revealed he’s not exactly a fan of either fighter.

“‘Sugar’ Sean O’Malley and Petr Yan, I don’t care,” Dvalishvili said on Wednesday. “They both suck.”

As far as his own fight with Aldo goes, Dvalishvili couldn’t dish out anymore compliments when praising the longest reigning featherweight champion in UFC history, who is now riding a three-fight win streak at bantamweight.

Well known for his blistering kicks and overall dangerous striking game, Aldo presents problems to anybody he faces but Dvalishvili looks forward to solving that puzzle come Saturday night at UFC 278.

“He’s a good striker, we all know,” Dvalishvili said. “He kicks hard and he defends wrestling. It’s hard to take him down and even if you take him down, he has great jiu-jitsu. He will get up or he will try to attack submissions.

“I have to fight everywhere. I have to be smart and I have to show everybody that I can fight everywhere. Everybody think I’m more of a grappler but I strike. I just don’t like to get punched in my face too much. I can keep it up with Jose Aldo and I can throw punches or whatever. I’m ready for every position.”

A win over Aldo could put Dvalishvili very close to title contention but don’t expect him to call for a shot at UFC gold, especially with Sterling serving as champion.

Both fighters have stated rather emphatically that they will never fight each other with Sterling going as far as saying he would leave the division before clashing with Dvalishvili.

“We’re still the same page that we’re not fighting each other,” Dvalishvili said for his part. “First, I have to win this fight, Aljo has to defend his belt. I know he’s going to do it. We will talk after but we’re not going to fight. We’ll figure out something, We will be fine.

“We are good friends, we’re training partners. He’s helping me, he’s here with me. After I fight, I will go help him, he has a fight coming up and his training camp will start and we’ll be helping each other. We are good teammates, good friends, neighbors.”