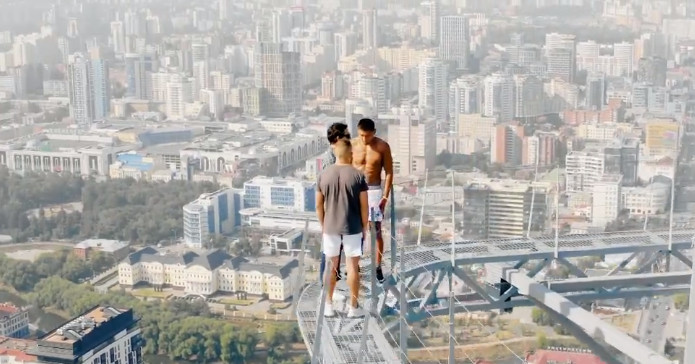 Mixed martial arts (MMA) knows no bounds when it comes to wackiness. Whether that’s holding fights in a pit, outside in the middle of a luscious mountainscape, on top of cargo containers above water, in the sand, with medieval armor on, five-on-five … it’s practically all been done by now. Thankfully, we haven’t seen fights take place on top of super-tall buildings. However, thanks to Russia-based promotion, RCC, staredowns have now taken place at the highest of altitudes.

Seen in the video embedded above are Welterweight competitors, Yasubey Enomoto (23-13) and Boris Medvedev (14-2). The two will go to battle at RCC 12 this weekend (Fri., Aug. 26, 2022) in Yekaterinburg, Sverdlovsk Oblast, Russia, along with eight other MMA bouts and three kickboxing matches.

While the entire idea of including staredowns like these is obscure, there is decent name value scattered throughout the RCC card. The most notable of the bunch can be seen in the evening’s headliner when former Bellator Middleweight champion, Alexander Shlemenko, takes on Aleksandar Ilic.

In the co-main event, Light Heavyweight powerhouse, Ivan Shtyrkov, is back in action, facing Nasrudin Nasrudinov. Ultimate Fighting Championship (UFC) followers will most remember Shtyrkov for his cup of coffee with the promotion, signing only to pull out of his debut against Devin Clark in April 2019 because of illness. “Ural Hulk” then failed a United States Anti-Doping Agency (USADA) test for boldenone and its metabolite 5β-androst-1-en-17β-ol-3-one, resulting in a two-year suspension and his contract’s termination.

Also on the card is former UFC Middleweight, Antonio Arroyo (10-5), who entered the promotion through Dana White’s Contender Series before going 0-3 last facing Joaquin Buckley in Sept. 2021 (watch highlights). Arroyo has since rebounded with a first round triangle choke submission against Johnson Bacelar earlier this month (Aug. 6, 2022).

Own A Piece of Nate Diaz’s UFC Legacy… And There’s A Surprise
Vera Mocks Sandhagen For ‘Crying’ After UFC Vegas 60 Win
Midnight Mania! Team Khamzat Responds To Khabib’s ‘No Muslims’ Comment
Marlon Vera: Title shot justified after Dominick Cruz finish, but Henry Cejudo can ‘get it’
Yoel Romero responds to ‘pampered’ Israel Adesanya over recent comments: ‘How many fights does Izzy have that are boring?’