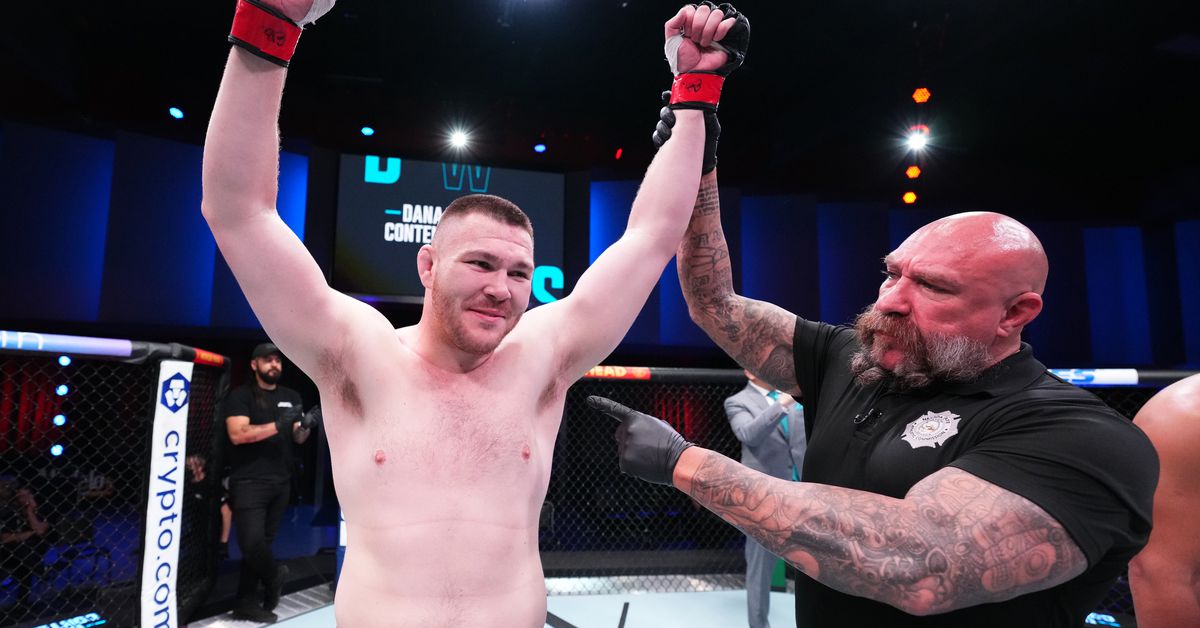 Michael Parkin took a page out of his teammate Paul Craig’s book, turning trouble into triumph as he survived Eduardo Neves’ heavy fists and secured a submission in the headliner of DWCS Season 6, Week 5.

Neves came with plenty of bravado, doing an Ali shuffle amid an early swarm of bombs. He came completely unprepared, however, for any sort of grappling, giving his back for a pair of spinning attacks off the clinch that allowed his opponent to take him down and tap him with a rear-naked choke.

It was all over at the 1:57 mark of the opening frame, and Parkin, along with the rest of the fight card’s winners: Darrius Flowers, Jesus Santos Aguilar, Cameron Saaiman and Denise Gomes.

In one of the more unusual and spectacular finishes in DWCS history, Darrius Flowers turned submission trouble into a finish when Amiran Gogoladze tried an inverted triangle and wound up slammed on his shoulders, prompting his tap just 73 seconds into the fight.

A full recap of the fight – and a highlight of the brutal finish – can be found here.

Jesus Santos Aguilar exhausted his longer and leaner opponent Erisson Ferreira da Silva before securing his fourth career guillotine choke, eliciting a tap (with both hands) from Silva at the 1:56 mark of the final frame. That came after Silva dove forward in a vain attempt to get top position after being slammed to the mat at the start of the round. In the process, he left his neck exposed, lapsing when it counted after Aguilar’s mistakes left him opportunities early.

Aguilar’s tenacity overcame some technique errors that cost him position and put him in danger. He escaped a pair of guillotine chokes in the first round and battled back to close the opening frame with a flurry of ground and pound. In the second, he charged through a forearm to the chin to wrestle his way to back control. Whatever physical advantage he lacked, he made up for with grit.

Twenty-one-year-old Saaiman made quite the impression on White, mixing his martial arts with ease against Josh Wang-Kim, an opponent eight years his senior, before a highlight-reel knockout. Saaiman cornered Wang-Kim against the fence and traded shots until his left hook beat his opponent’s to the target. Wang-Kim went face-first to the canvas, his jaw rattled by the hard shot. White gave Saaiman his props afterward, sealing the youngster’s future in the octagon.

Gomes spun, and spun, and spun her way toward a wheel-kick knockout. It was her fists and knees, however, that did the lion’s share of the work against Rayanne Amanda. In a fight closer that its 30-27 scorecards for Gomes indicated, the two went toe-to-toe over three rounds, bloodying each other with back-and-forth exchanges of striking. Gomes brought a little more energy to the party, pouring on the offense late as Amanda tired from the high pace and efforts to get the fight to the ground. White was standing after the first round, wowed by the heart from both competitors despite the eventual shutout on scorecards.