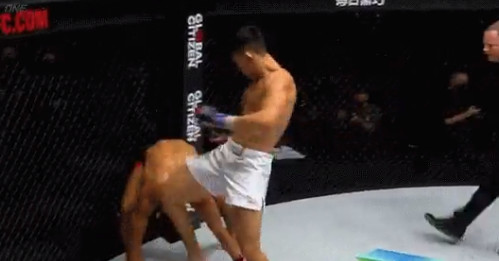 For the better part of a year, Christian Lee maintained that Ok Rae Yoon didn’t deserve to have the ONE Championship lightweight title, and on Friday morning he proved his point, viciously stopping Ok with a series of grounded knees in the main event of ONE Championship 160.

Lee and Ok first fought back in September of 2021, with Ok winning a disputed decision victory to wrest the lightweight title from Lee. In the build-up to their rematch, Lee insisted that he was truly the better fighter and that he would make sure that was undeniable this time around. Lee did not disappoint, overwhelming Ok from the jump with powerful punches and knees that had Ok on the backfoot almost immediately. Though Ok made it through the first round, Lee’s barrage continued in the second, dropping the lightweight champion with an overhand right and then brutalizing him with a series of grounded knees (legal in ONE Championship) to get the finish and claim the lightweight title.

Check out the brutal finish below.