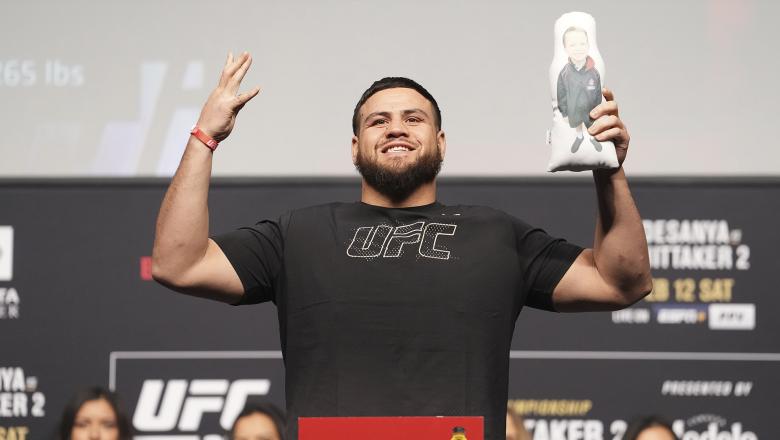 Coming off three consecutive losses by the end of 2019, Tuivasa was looking to turn his career around in 2020. He did so by finishing his next two opponents, Stefan Struve and Harry Hunsucker, comfortably. But those wins weren’t followed by any creative celebrations and the patented “Shoey” because of the regulations in place from the COVID-19 pandemic.

However, those two wins landed Tuivasa a featured bout on a Conor McGregor pay-per-view card, which history has shown is one of the biggest platforms a UFC athlete can be on. Tuivasa challenged the former NFL player turned mixed martial artist, Greg Hardy.

The fight only lasted one minute and seven seconds, but both fighters came out swinging heavy leather early. Hardy was the first to land a big shot, which wobbled “Bam Bam” momentarily. But Tuivasa came back with a left hook that dropped and finished Hardy just seconds later.

Back in front of a full crowd at T-Mobile arena, Tuivasa jumped on top of the cage, was thrown a shoe and a beer, and celebrated in front of the Las Vegas crowd the best way he knows how. Given the magnitude of the event, this win and celebration, launched his rise to superstardom.