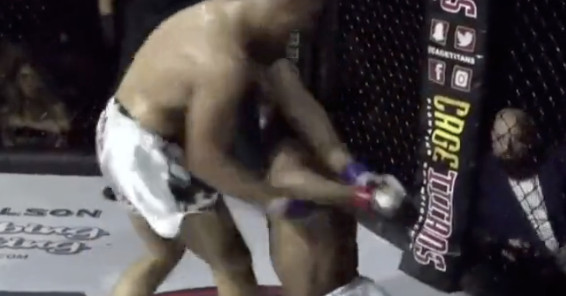 New England regional MMA promotion Cage Titans is no stranger to highlight-reel finishes, but on Saturday, things got very painful for one amateur fighter.

At Cage Titans 55 in Plymouth, Mass., a lightweight bout between debuting fighters Kyle Pavao and Wayne Downer ended in a gruesome finish. In the second round of the contest, Pavao applied a deep keylock, which eventually snapped Downer’s left arm, leaving the crowd and commentators in complete shock.

Watch the video of the nasty submission finish below:

Pavao made the most out of his first MMA appearance after competing twice on the regional scene in grappling bouts for Cage Titans where he competed to a draw at Cage Titans Combat Night 3, and picked up a heel hook submission win at April’s Cage Titans 52 event.

Cage Titans has featured many fighters who made their way to the UFC, including Rob Font, Randy Costa, and Jay Perrin.