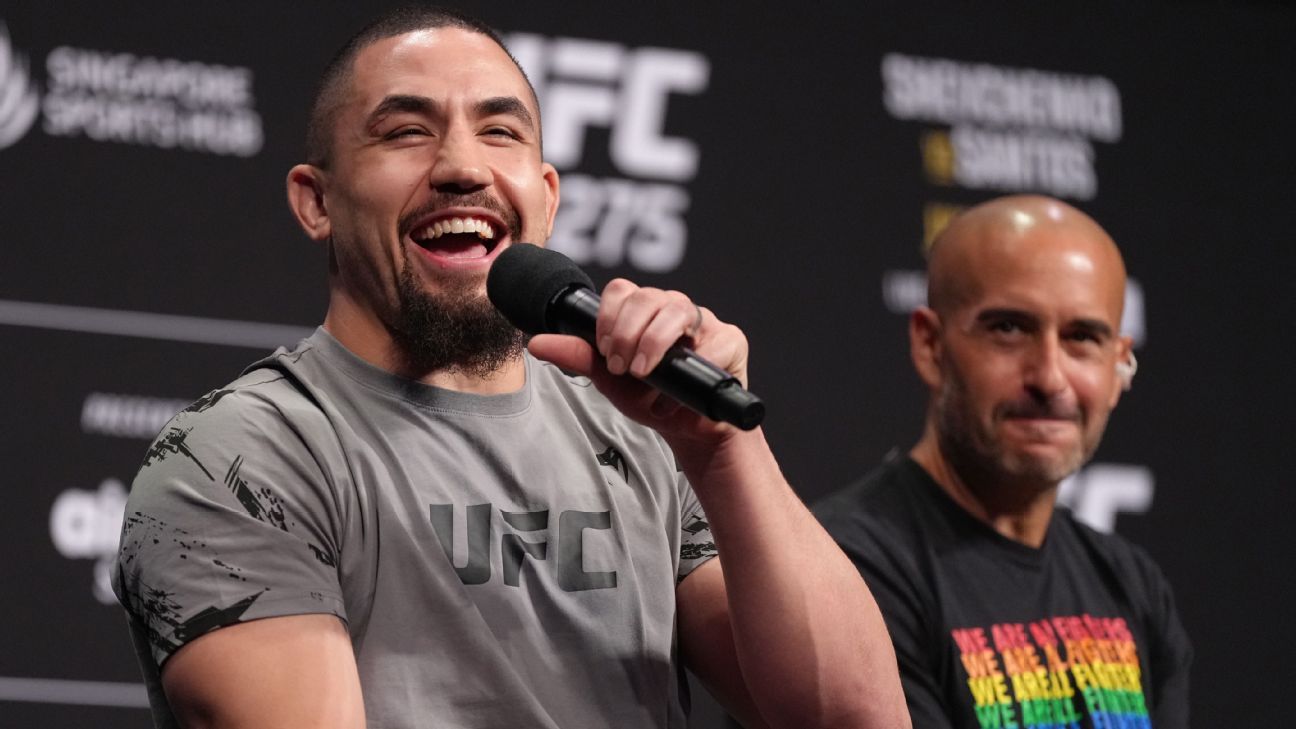 Former UFC middleweight champion Robert Whittaker insists the best fights of his career are ahead of him, saying he’s hungrier than ever as he prepares to face Marvin Vettori in Paris this weekend.

It has been nearly seven months since Whittaker lost to fierce rival Israel Adesanya for a second time, albeit after a far stronger showing than in their first meeting when the Australian was knocked out in the second round and lost his middleweight belt as a result.

Heavyweight contenders Ciryl Gane and Tai Tuivasa meet in the main event of UFC Fight Night in Paris on Saturday.

But while that defeat saw Whittaker step away from the sport completely and had him questioning whether he still wanted to fight, the loss from earlier this year was far easier to digest and left him craving a third shot at Adesanya.

“The fight with Izzy was a hard-fought fight. I thought I did a lot of things right on the night,” Whittaker told ESPN. “But I didn’t get the nod that night and it is what it is, you can’t cry on it, you can only get back to the gym, get back to work and focus on the next one.

“But I did a lot of things right, I landed some successful takedowns and I threatened the takedowns a lot, my jab was on point, my counter striking was on point; defensively I think I did a good job of nullifying his main attributes. But it is what it is… the next fight between us, I think there’ll be a lot of different things I can take advantage of, and then move differently [as well].”

Where Whittaker withdrew from mixed martial arts completely following his loss to Adesanya in 2019, this time around he was keen to get back to work as quickly as possible. That desire saw Whittaker take a fight with Vettori on the UFC 275 card in Singapore, only for injury to get in the way and force the Australian to withdraw from the event.

But a secondary date was announced and he will now line up alongside compatriot Tai Tuivasa, who fights Ciryl Gane in a blockbuster heavyweight fight on Saturday.

“Marvin’s well-rounded, tough and fit. He’s going to make it a dogfight,” Whittaker said. “He’s going to try and push forward and try to set a high pace, and he’s had a lot of success with that in his whole career.

Many believe that Whittaker and Adesanya are simply in a different league to the rest of the UFC middleweights, a point the Australian hopes to reinforce when he steps inside the Octagon in Paris.

But later this year Adesanya will face off with former kickboxing rival Alex Pereira, to whom he has lost twice, in a fight that has the combat sports community licking its lips.

“It’s hard to say about the Pereira-Adesanya matchup, two guys who have fought each other before,” Whittaker said of the November fight. “They’re both kickboxer backgrounds, both tall guys, it’s going to be very interesting. I think the difference in glove size is going to make a big change to the dynamic of the fight, but I’m looking forward to it.”

Should Pereira defeat Adesanya, there may be a way back to a title shot for Whittaker sooner than planned.

Whatever the case, the Australian appears to be in the best space possible mentally, as he begins what is an “Act 3” of sorts of the Robert Whittaker story.

“The best years are coming up, I feel like I’m just coming into my prime and my peak condition,” he told ESPN. “I think I have the best fights ahead of me. The motivation for the work is my family, they’re the biggest driver, they’re the reason why I sweat and bleed as much as I do. I’m fighting for something bigger than myself.