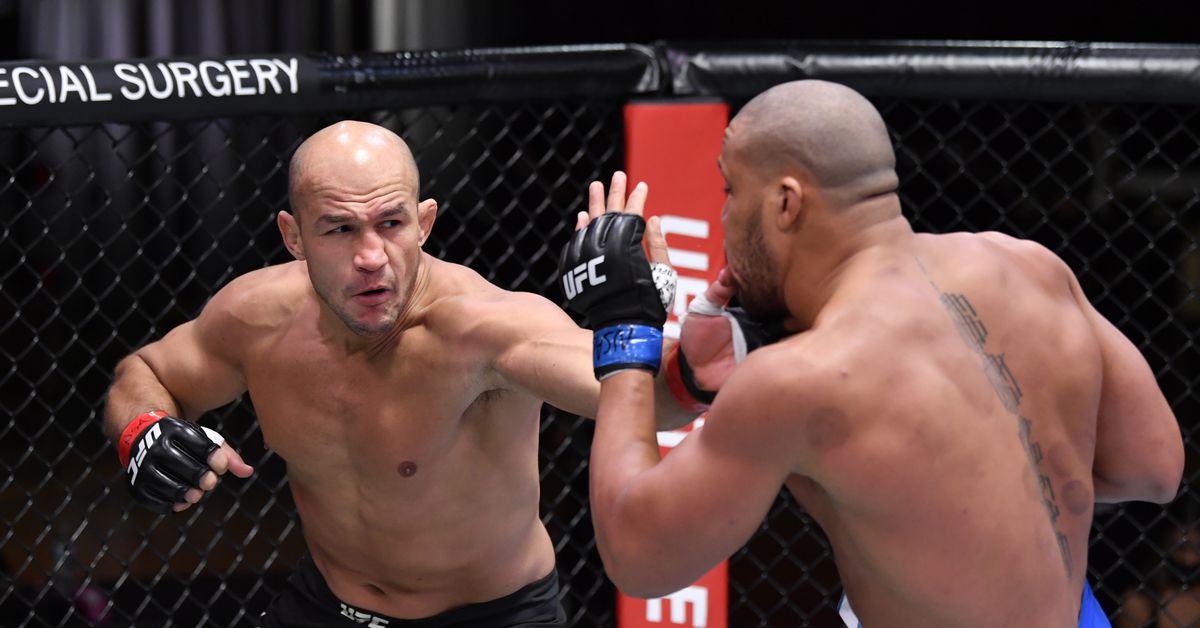 Junior dos Santos is still upset about how his final UFC fight against Ciryl Gane went down back in December of 2020.

Dos Santos fell to Gane in the second round of their UFC 256 fight, with “Bon Gamin” hitting “Cigano” with a monster elbow that dropped the former heavyweight champion. According to Dos Santos and many others who watched the replay several dozen times, the finishing blow looked suspiciously like an illegal shot to the back of the head.

Now JDS says Gane is up to his old tricks again at UFC Paris, where the French fighter defeated Tai Tuivasa via KO in the third round (watch the highlights here).

“What a dirty fighter this Gane is,” dos Santos wrote on Twitter. “Again hitting the back of the head. And now what are those ‘fight experts’ will say about it?”

Que cara sujo esse Gane
De novo batendo na nuca, o que esses “especialistas” vão dizer agora?
.
What a dirty fighter this Gane is
Again hitting the back of the head
Nad now what are those “fight experts” will say about it? @ufc @danawhite pic.twitter.com/EP6NUlwmWs

The video Junior shared shows Gane throwing a wild hammerfist which clearly bounces off the back of Tai Tuivasa’s head. Gane would go on to finish the fight with his follow-up punch.

That leads to incidents like Ciryl Gane beating Junior dos Santos with an unacknowledged iffy elbow, and now Ciryl Gane hitting Tai Tuivasa on the back of the head during their bout.

In traditional HW matchmaking, Gane had to take out an older man.

Dos Santos has his reasons for being bitter about his loss. It was his fourth defeat in a row, resulting in the UFC releasing him from the promotion. It’s clear “Cigano” was not happy about being tossed by the UFC after 12 years with the promotion. Going out on a questionable finish was just salt in the wound.

After a year and a half break from competing, dos Santos returned at an Eagle FC event in May 2022, losing a fight against Yorgan De Castro after his shoulder spontaneously dislocated on him in the third round. While Eagle FC head Khabib Nurmagomedov was clearly hoping to set up a JDS vs. Fedor Emelianenko fight, the TKO loss via injury scuttled those plans.

Paul Targets MMA … Announcement And AKA Training Looms
Marlon Vera: Title shot justified after Dominick Cruz finish, but Henry Cejudo can ‘get it’
Jon Jones is the fight Francis Ngannou wants
Alatengheili Is On A Mission To Make The Top 15
Cris Cyborg wins professional boxing debut in Brazil