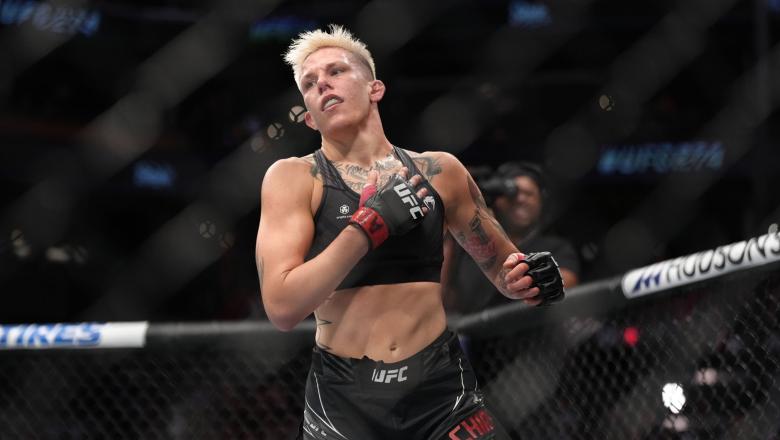 Stylistically, Chiasson expects the matchup to turn into an “explosive” contest, touting Aldana’s boxing and elusiveness on the feet.

That said, the clash could provide some opportunities for her to showcase her all-around game.

“I just feel like I’ve unlocked a lot of different levels of my game to where I’m able to mix things up a little bit more and just be more of a complete MMA fighter,” Chiasson said. “She’s got great wrestling defense, so I think we’re going to run into some sticky stuff, but that’s the name of the game, and that’s what makes it fun. I’m kind of ready for whatever avenue we decide to take it.”

A win could catapult Chiasson into the top-5 in the bantamweight rankings, which essentially puts her a stone’s throw away from a title shot now that Amanda Nunes is back on the throne. It would seem like a fast rise for Chiasson but, then again, all she has known is fighting the best inside the Octagon.

While the big stage might tempt some fighters toward fighting outside of themselves in pursuit of a finish, Chiasson isn’t allowing that pressure to seep into her expectations. To her, the absolute most important thing is getting the win.

“All of us as fighters want to go in there and perform our best in a round, two rounds,” she said. “I want to perform my best whether it’s going to be one round, two rounds or three rounds. I’m looking to take this fight into my hands, and even if it’s not for a second, put it back in my hands, and I think that’s what I love so much about fighting. You just don’t know where it’s going to go, and you just keep doing it. You keep going until you can’t go anymore, so I’m just looking forward to getting in there and putting everything I have forward.”