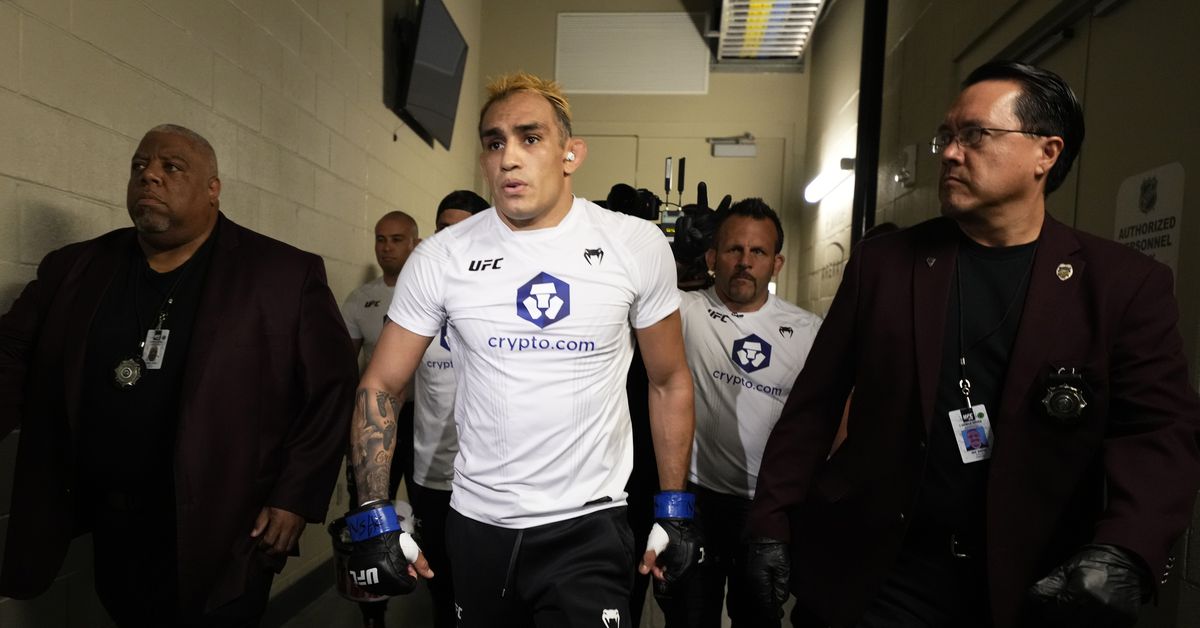 The former interim lightweight champ fired back at Cormier, who recently said he was “done,” and any other UFC commentator who advised retirement following his fifth consecutive loss in a UFC 279 headliner against Nate Diaz.

“When I feel like I’m ready to retire, I will retire,” Ferguson told ESPN.com. “But right now, it’s a little bit different, a little more interesting. With that being said, ‘DC’ and all these commentators that just keep repeating the same s*** over the years – because that’s what they want me to do. They want the public eye to see me like that and they want to see me as a quitter and so on and so forth.”

Ferguson took aim at Cormier with a reference to “Towelgate,” the retired champ’s infamous UFC 210 weigh-in where he grabbed the towel and then denied it, only to recently admit he committed the foul to help him make weight.

“I never cheated to get on the scales to retain my championship like DC – you know, hashtag ‘Towelgate’ – these guys grabbing the towel, trying to lift some pounds off the scale,” Ferguson said. “The UFC right there, they went with it. It’s different. It’s interesting. It’s like an inside job.

“This guy wants to call it out, I’m going to call you right back out. You don’t have to be an a****** to the people that actually work hard. There’s a lot of up-and-coming fighters that see that s*** and you’re going to try and go with the clique – and that’s it. So don’t start that sh*t. Literally, I’ve given my shirt off my back to the fans, and same thing with the UFC, and I’ll still take my shirt off to go inside that f****** octagon and show that I’m the f****** man. I’m still the f****** champ. The s*** that I do for this company is unreal, and I love this company, too, that they can have me to back them up. I have that.”

While disappointed at with the outcome at UFC 279, Ferguson was optimistic about his future under a new team.

“As soon as [Justin] Gaethje hit, my team kind of fell apart,” he said. “Everybody went their own way – we had to. And then trying to build a new team, I found a good crew. My league of astronauts here, trying to figure out what problems. We’re back on schedule, waiting for my left shin to heal. Not kicking too hard, but hard enough. Elbows, everything in the repertoire.”

Ferguson said with a few adjustments, like not shooting for the takedown that cost him the submission loss, Diaz would have been the one in the loss column after their last-second fight was booked.

“Did you see Nate have to take breaks? Nothing against him and stuff, but I gave him his break,” Ferguson said. “It cool, it was a send-off fight. I’m not saying I took it easy on him, and what we prepared for, but it’s a little more interesting when you’re preparing for a guy you really don’t know. Nate’s cool, I have nothing against him. I don’t consider him a friend, but he’s cool. He’s a good fighter, and I respect that.

“He’s out of the contract business. He’s not trapped any more. It’s like the saga has finished and that gives a lot of other people some hope. It’s not like the UFC holds everybody hostage. Everybody has a decision to do it. The company is growing, and I’m growing with the company, and to be able to help – not being long-winded – but to be able to help pave the way, kind of be right there with the promoters and try to get s*** done, that’s man s***, dude. I’ll continue to do that, despite the commentators and the people [who doubt me].”