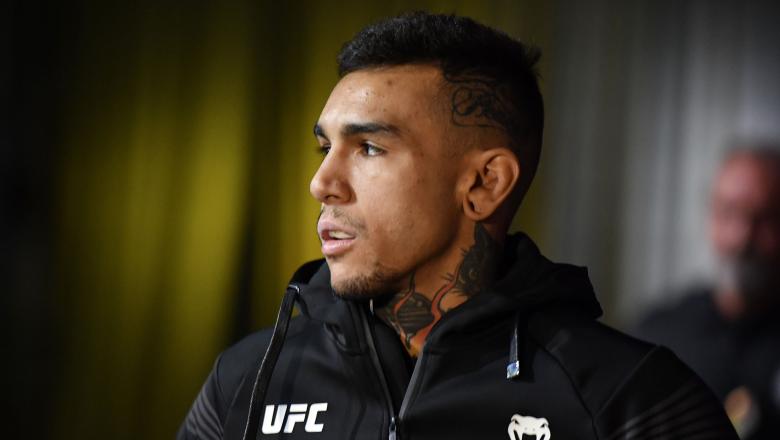 And Fili’s confidence has not been dulled by his recent cold spell, which consists of a pair of losses against Bryce Mitchell and Joanderson Brito that bookended a stellar effort against Daniel Pineda that wound up as a no contest when Pineda was unable to continue after an accidental eye poke.

“I really am something special when it comes to fighting, and I haven’t shown that in my performance consistently enough,” he said. “The guy who fought Pineda in that first round can beat any ’45er in the world. My biggest thing now is consistently showing that. I’m a little embarrassed and a little ashamed that I haven’t shown it consistently enough, that I’ve had these flashes of brilliance and that’s not enough. Flashes of brilliance aren’t enough to cement a legacy and it’s time to start doing that. And I’m in a place where I think people have sort of accepted that I’m just an exciting mid-tier ’45er and it makes me a little sick to my stomach. Nineteen-year-old me would put his head through a wall if he knew that I was 21-9 (with 1 NC). It’s infuriating, to be completely honest. So from this point on, my objective to consistently perform to my potential, and when I do that, I really believe that I’m the best ’45er alive.”

Nine years on the UFC roster means you’re one of the best 145-pound fighters on the planet. To be the best, he has to be consistent on a nightly basis and put together a string of wins. That begins against Algeo, a tough, veteran out who Fili will have to be on his Ps and Qs to beat in both skill and toughness. But that’s the thing, as “Touchy” Fili has shown both throughout his 18-fight UFC run, making him one of the most intriguing competitors in the division. Add in an old soul that makes him old school in a lot of ways, and it’s easy to imagine him hitting his marks. And if he does, Fili can be a crossover star with appeal not only to the hardcore fans from back in 1993, but the modern-day followers of the sport. How does this happen? He realizes that being set in one line of thinking never allows for growth, whether in a pro sport, or in life. So he’s willing to improvise and keep an open mind.

“I feel like a middle child as far as the generations,” said Fili. “I see what men used to be and I see what men mostly are now, and I think there’s merits to the way that our generation has changed. I think there’s something to be said for paying attention to mental health and something to be said for teaching young men to express themselves and communicate more effectively and ask for help. I think there’s something to be said for equality between men and women. All these things are righteous causes and I think that it’s something that my generation should be proud of that we’re making these changes. I also think that it’s important to remember that you gotta have some balls and you gotta have some grit and some heart, and it’s okay to take care of yourself and your mental health and I’m glad that conversation is being opened up. But you also sometimes gotta bite down and be a f**king man and play through pain and sacrifice for your reward and all these things that I feel other generations before, though they didn’t have much mental health-conscious stuff and there were plenty of problematic things, I think that generation had a lot of s**t figured out that my generation of young men has kinda gotten away from. And I’d like to see a happy medium between the two.”