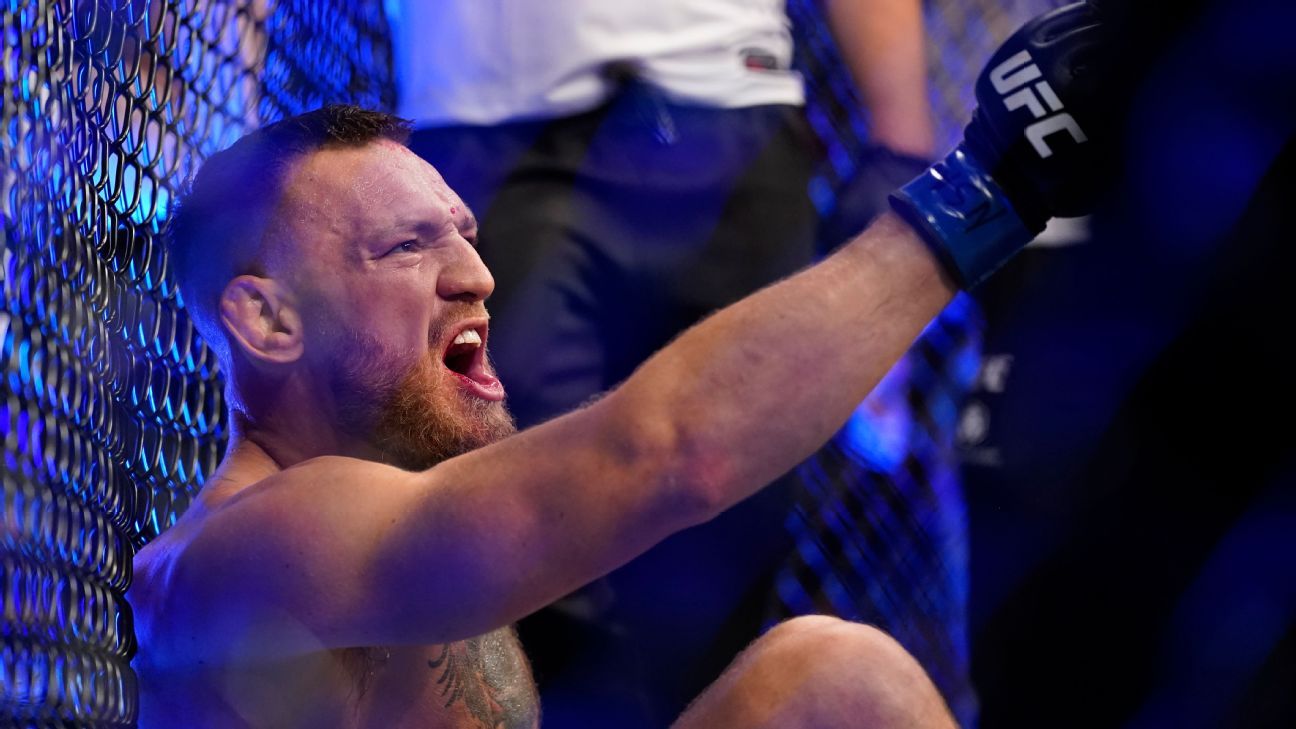 Conor McGregor has not stepped into the Octagon in 14 months, yet hardly a day goes by without his name being brought up in an MMA conversation. As the starry Irishman’s return from a broken leg draws nearer, there is speculation about who might be next to step under the brightest of spotlights with McGregor.

Nate Diaz, who had two entertaining and lucrative meetings with McGregor, appears to be out of the running. Diaz recently fought out of his UFC contract and said he plans to move on to new challenges.

Floyd Mayweather, whose 2017 boxing match with McGregor was a huge draw, said this week that he is negotiating another boxing match with McGregor for 2023. Negotiating with whom? McGregor is under contract with the UFC, which seems keen to get him back into the Octagon — a place where Mayweather would not dare venture. McGregor also posted on Instagram that he was “#notinterested” and posted a picture of him punching Mayweather.

So who does that leave for McGregor? Will UFC matchmakers aim for the biggest money-making fight they can book, or will they look to get McGregor back on track with a win? Will the UFC go right for the glory by putting him in a championship bout?

Here are some possibilities offered up by ESPN’s MMA team.

He should fight Charles Oliveira next, even if Oliveira wins or loses against Islam Makhachev on Oct. 22. Yes, I realize that if Oliveira wins, that will mean I’m campaigning for McGregor to get a lightweight title shot. … And you know what? I’m good with it.

Of course, McGregor doesn’t deserve a title fight, but this scenario has nothing to do with what McGregor deserves. It’s all about what Oliveira deserves. If Oliveira beats Makhachev in Abu Dhabi, that would mean he’s defeated Makhachev, Justin Gaethje, Dustin Poirier, Michael Chandler and Tony Ferguson in his past five bouts. That is insanely impressive.

I’m usually a purist when it comes to these topics. I will almost always vote in favor of rankings and legitimacy over spectacle and pay-per-view buys. But I can’t sit here and pretend that any part of me would be upset if Oliveira got to cash in on a McGregor fight. And even if he were to lose Makhachev, the point still stands. If anyone deserves the money that comes with a McGregor fight in MMA right now, it’s Oliveira. He has been one of the most entertaining and strongest-willed athletes in the sport over the past several years. — Brett Okamoto

The opponent for McGregor in his return will be a business decision. I can’t think of a better opponent to face him than the other fighter that can sell pay-per-views and drive big gates without a championship on the line: Jorge Masvidal.

In the past, UFC president Dana White ruled out the matchup because of the size differential, but now with McGregor seeming closer to a return at welterweight than at lightweight, a fight with Masvidal could be a possibility.

Masvidal would make the perfect matchup for McGregor’s return. He enjoys stand-up exchanges and he excels at promoting events. Either of them breaking the losing streak will also open the door for big fights in the near future.

Talks of a Gilbert Burns fight have been there for months now. Still, Masvidal is also recovering from a hand injury and — if given the opportunity — he will likely wait for the former two-division champion, a fight he’s wanted since 2019.

I don’t think the door on the Diaz trilogy is closed, but Masvidal can be the closest thing in terms of the size of the event and something that wouldn’t be unfair to the rest of the roster, like having McGregor with a contender or title fight at 155, where he won six years ago. — Carlos Contreras Legaspi

McGregor needs to be slotted at the top of the card. He’s the biggest financial draw in the history of the sport. There’s no way around that, even with him having just one win since 2016. That’s why plenty of people will propose fights with contenders like Michael Chandler or Justin Gaethje. But why not maximize McGregor’s return by pitting him against one of the sport’s most prominent rising stars in what would be a win-win situation for the UFC? Pimblett could fight once or twice more before McGregor’s return, which is unlikely until probably around the midway point of next year, per sources.

If Pimblett can get a pair of wins, he’ll be even white-hot and on a similar path to superstardom that McGregor was on in 2014. The fight can happen at welterweight, though both are natural lightweights. Pimblett has made it clear he gains a lot of weight in the offseason, and McGregor looks larger than ever in photos. This would be a massive business score for the UFC. It would pit England versus Ireland, and the promotion stands to gain no matter who wins. If McGregor is victorious, “The Notorious” is back and could be put in position for a title shot. If Pimblett wins? Boom. The UFC will have a new megastar to build around who is not even 30 years old. — Marc Raimondi

I’ve been agitating about the need for the UFC to return to Australia for some time and there are rumors that a card will take place in Perth in February. I’m not sure this is the fight for that event, but an Alexander Volkanovski-Conor McGregor bout would be massive. Volkanovski’s popularity in Australia, paired with the scores of Irish who live Down Under, the UFC would be guaranteed a full house.

And these two have previous beef, too, with McGregor declaring he would “kick Volkanovski’s head off like a rugby ball” following the Australian’s victory over Brian Ortega at UFC 266 in 2021. The featherweight champion’s reply was simple, suggesting McGregor was “on the piss.” The Australian has since teased moving to lightweight, so why not book his first bout in the new division against one of the biggest names in the promotion? If Volkanovski wins, could he have a crack at champ-champ status next? — Sam Bruce

If McGregor is serious about competing for a belt in the UFC again, he has to face someone who poses a real threat. But the UFC is probably not interested in giving him an opponent who might prefer to take him to the ground and hurt or submit him there. But he isn’t owed any favors in a division full of legit contenders. That’s why Justin Gaethje makes the most sense.

It’s the proper fight for McGregor because he won’t have to worry about someone taking him to the canvas a dozen times. Gaethje will stand and trade with him. He’ll throw a bunch of leg kicks, too — and that won’t be fun for McGregor — but he’ll engage. And that’s precisely what a 34-year-old, who hasn’t exactly been an active fighter over the past six years, needs. It’s also a good fight for Gaethje, who has come up short against the division’s crème de la crème. And it’s a good fight for the UFC, which can give McGregor immediate title-shot validation if he wins or put a big name on the résumé of a fighter headed toward another championship opportunity. It works for everybody. — Myron Medcalf

I’m not going to suggest a single name, but I will narrow down the possibilities. Of the hundreds of men on the UFC roster, I say go ahead and stick McGregor into the cage with any fighter except the eight men who wear championship belts. Do I have to spell out why handing a title shot to McGregor — who has just one win in the past six years and has been finished three times during that span — would transform all UFC championship belts into cheapened trinkets? You don’t see LeBron James and Tom Brady in championship games except when they earn their way in, despite the ratings and revenue their star power would deliver. That’s the way it is at the highest level of sports. You want sports entertainment? Watch the WWE.

And UFC stockholders take note: Any McGregor fight will pack an arena and make pay-per-view sales skyrocket. He’s not just the ‘A side’ of any matchup. He’s the gold record all by himself. So, find “The Notorious” a fun fight and go count your money. — Jeff Wagenheim