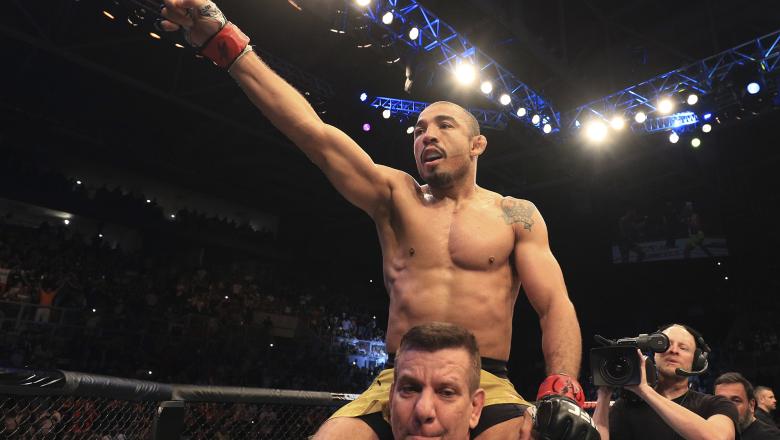 It looked like a typical dominant performance for UFC featherweight champion Jose Aldo early in the UFC 129 co-main event Saturday night at Rogers Centre, but Ontario’s own Mark Hominick refused to go away, fighting off a series of facial bumps, bruises and cuts to finish strong and leave his own courageous effort as the lasting image of the 145-pound title fight, which was ultimately won clearly and unanimously by Aldo. Watch post-fight interview with Aldo

Scores were 48-45, 48-46, and 49-46 for Aldo, who improves to 19-1; Hominick, who is expecting his first child with his wife shortly, falls to 20-9. The bout was named fight of the night by Dana White at the post-fight press conference. Watch post-fight interview with Hominick

“I got to take my hat off to Mark Hominick, he’s a helluva fighter,” said Aldo. “He just went five round and gave it his all.”

After a quick touch of gloves, Hominick went at Aldo at the bell, with the champion’s first barrage making him back up to restart. Aldo kept pressing, scoring with punches and kicks, but Hominick took them well, even catching a kick and knocking Aldo off balance. With 3:15 left, Aldo switched things up with a takedown of his foe, but almost got caught in a submission until he quickly pulled away and bulled the challenger into the fence. Hominick struggled to get free, but Aldo wasn’t having it, as he delivered hard strikes from the top while still staying in positional control. Soon, Hominick’s face began getting marked up by the assault, but he benefitted from a restart by referee John McCarthy in the final minute. By the end of the round, Aldo had taken the bout back to the mat, capping off a solid opening frame.

Aldo opened the second with one of his blistering leg kicks, but Hominick took it well and began trying to work punches to the body. Two Aldo takedown attempts were tossed aside, and Hominick’s confidence seemed to be growing with each passing second as he began to tag the champion with his punches. Aldo’s response was a takedown two minutes in that immediately silenced the crowd, and if possible, they got even quieter after a couple of thudding shots. They got back into it after McCarthy restarted the bout with a minute left, but again, Aldo used a sharp 1-2 to set up another late round takedown.