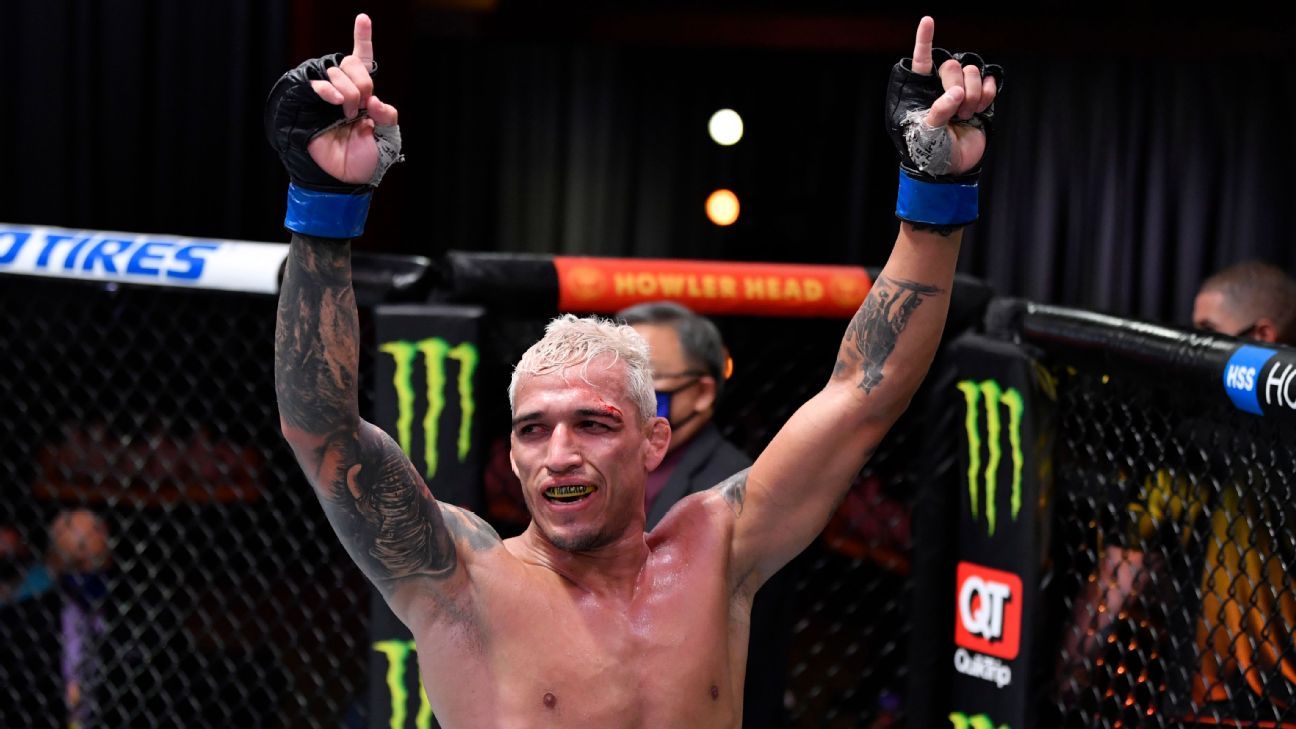 UFC 280 might be the deepest card the promotion has put on so far this year — as it features essential fights in two of the best divisions: lightweight and bantamweight.

In the main event, the vacant UFC lightweight title will be decided in a bout between former champion Charles Oliveira and dominant contender Islam Makhachev, who is trying to bring the title back to Dagestan like his coach and former champion Khabib Nurmagomedov.

Oliveira (33-8, 1 NC) beat Justin Gaethje in his last fight, at UFC 274 last May, but he missed weight before the bout and was stripped of the belt. Makhachev (22-1) will have Nurmagomedov in his corner — it was always the plan of Nurmagomedov’s late father and trainer, Abdulmanap, to have Makhachev take the UFC lightweight torch from Nurmagomedov.

There is a deep undercard here, too, highlighted by two fantastic bantamweight matchups: Aljamain Sterling defending his 135-pound belt against former champ TJ Dillashaw and Petr Yan, another former bantamweight champ, trying to hold off the wildly popular Sean O’Malley.

So what I am looking forward to most? Here’s my ranking of the evening’s top five attractions.

How to watch and purchase UFC 280 on ESPN+ PPV

Charles Oliveira takes on Islam Makhachev for the vacant lightweight title in the main event of UFC 280 in Abu Dhabi.

If you want to talk about the best fighting the best, which has been the calling card for the UFC since the early 2000s, that is precisely what you’re getting here. Oliveira and Makhachev are, without question, the top two lightweight fighters in the world. Some can poke holes in their résumés, but realistically both are incredible talents in their primes. Oliveira has won 11 fights in a row and would be the lightweight champion right now if not for his missing weight before a first-round TKO victory over Gaethje at UFC 274 in May. Makhachev has won 10 straight and hopes to take the torch from his longtime teammate and current coach, Khabib Nurmagomedov, the former dominant UFC lightweight champion.

And the best part? The stylistic matchup here is fascinating. Oliveira has some of the best Brazilian jiu-jitsu skills ever seen in MMA. He has the most submission wins in UFC history (16) and is a threat to finish the fight from the top, his back or by snatching a limb or someone’s neck in a scramble. Meanwhile, Makhachev, like Nurmagomedov, has shown himself to be a dominant wrestler and grappler, skills he has plied since he was a child in Dagestan. Something has to give here. Will Makhachev take Oliveira down and test his elite ground skills? Or will Makhachev try his hand on the feet with Oliveira, who has rounded into a dangerous Muay Thai striker out of Chute Box?

Oliveira has finished 10 of his last 11 opponents while Makhachev has finished four straight. This fight should be terrific and decide who is the best 155-pound fighter in the world.

This was a hard choice over Sterling vs. Dillashaw, a title fight between two elite fighters, but this matchup is so incredibly intriguing for both men. O’Malley, who has a chance to become one of the biggest stars in the UFC with a win, has never been challenged like this. Yan is a former UFC bantamweight champion, has significant power on the feet and a good ground game. He was on his way to beating Sterling in their first fight last year before an ill-advised illegal knee caused a disqualification.

Yan vs. O’Malley is polarizing in a way, too. UFC president Dana White has said publicly that he didn’t think 27-year-old O’Malley was ready for the caliber opponent that Yan represents. But matchmakers Sean Shelby and Mick Maynard talked White into it and O’Malley seems comfortable with the step up in competition.

It’s easy to make the storyline here about O’Malley because he already has a big fan following and can take things to a new level this weekend. But let’s not forget Yan, who remains one of the world’s top two or three best bantamweight fighters. It would not be out of the question to see Yan getting a Sterling trilogy bout if he defeats O’Malley — and he might be favored over the Sterling vs. Dillashaw winner. Yan himself is only 29 years old. This one has a great story behind it and should deliver, as well. Both are action fighters.

TJ Dillashaw discusses his mentality for his upcoming fight with Aljamain Sterling at UFC 280.

Sterling has been one of the more maligned champions in the UFC for some time. He won the belt from Yan via disqualification and some felt Yan even won the rematch back in April at UFC 273. It was a close fight, but Sterling deserves his due. He dominated Yan on the ground over vast periods of that bout. A win over Dillashaw, a two-time former UFC bantamweight champion, would add credibility to Sterling’s title reign. Sterling remains underrated and will likely come in with a chip on his shoulder.

Meanwhile, Dillashaw has a chance to become the first three-time UFC champion since Randy Couture won the heavyweight title for the third time in 2007. Couture is the only man ever to hold a UFC title over three reigns and Dillashaw will be the second if he beats Sterling. Ring rust could be an issue for Dillashaw, who has fought just once in three years due to a positive drug test and knee surgery following a win over Cory Sandhagen in July 2021. If Dillashaw prevails in Abu Dhabi, there will be talk of him being the best 135-pound fighter ever and it wouldn’t be a bad argument by any stretch. At 36 years old, can Dillashaw return to his elite form? It’ll be fascinating to find out.

Dariush could make a better case for a lightweight title shot than anyone outside of Makhachev. He has won seven straight in the brutally tough 155-pound division and in four of those, he won a $50,000 fight of the night bonus. Just have one conversation with coach Rafael Cordeiro out of Kings MMA and you’ll get an earful about how special Dariush is, as a fighter and a person. Brazilian jiu-jitsu has been his calling card, but the Iran-born scrapper has also developed power in his hands. He’s dangerous everywhere now and if he wins Saturday, it’ll be hard to deny him a title shot.

Honestly, Dariush deserves a ton of credit for even accepting a fight with an up-and-coming talent like Gamrot. Many fighters might have waited for a chance at the belt. Dariush shows he’s willing to take on dangerous, rising stars like Gamrot to cement himself as a top contender.

Gamrot has won four straight, is the former KSW lightweight and featherweight champion and is coming off a terrific win over top prospect Arman Tsarukyan in June. Former UFC light heavyweight champion Jan Blachowicz, Gamrot’s Polish countryman, predicted last year to ESPN that Gamrot would be a UFC champion someday. A win here and it’s possible “Gamer,” who trains out of American Top Team, gets himself in that No. 1 contender conversation.

Like Dariush, Muhammad is a contender facing off against a surging, less experienced fighter. Muhammad is on the run of his career and has been calling out the likes of Khamzat Chimaev for big contender matchups. The Chicago native is unbeaten in eight straight and has just one loss since 2016. Muhammad has improved his wrestling a great deal, has opportunistic striking and his fight IQ is tremendous. He has beaten Demian Maia, Stephen “Wonderboy” Thompson and Vicente Luque — three fighters with vastly different styles — in three straight fights.

Brady maybe cannot be considered a prospect anymore at age 29. But he’s undefeated at 15-0 and appears to be one of the best up-and-coming fighters in any UFC division. The Philadelphia native is an absolute beast on the ground, with unbelievable strength there and in the clinch. Just ask the man he beat last, Michael Chiesa, who has one of the best grappling games in the division. On top of that, Brady has power in his hands. He’s a former Cage Fury FC welterweight champion and a newly minted welterweight contender who could be born Saturday night if Brady beats Muhammad.