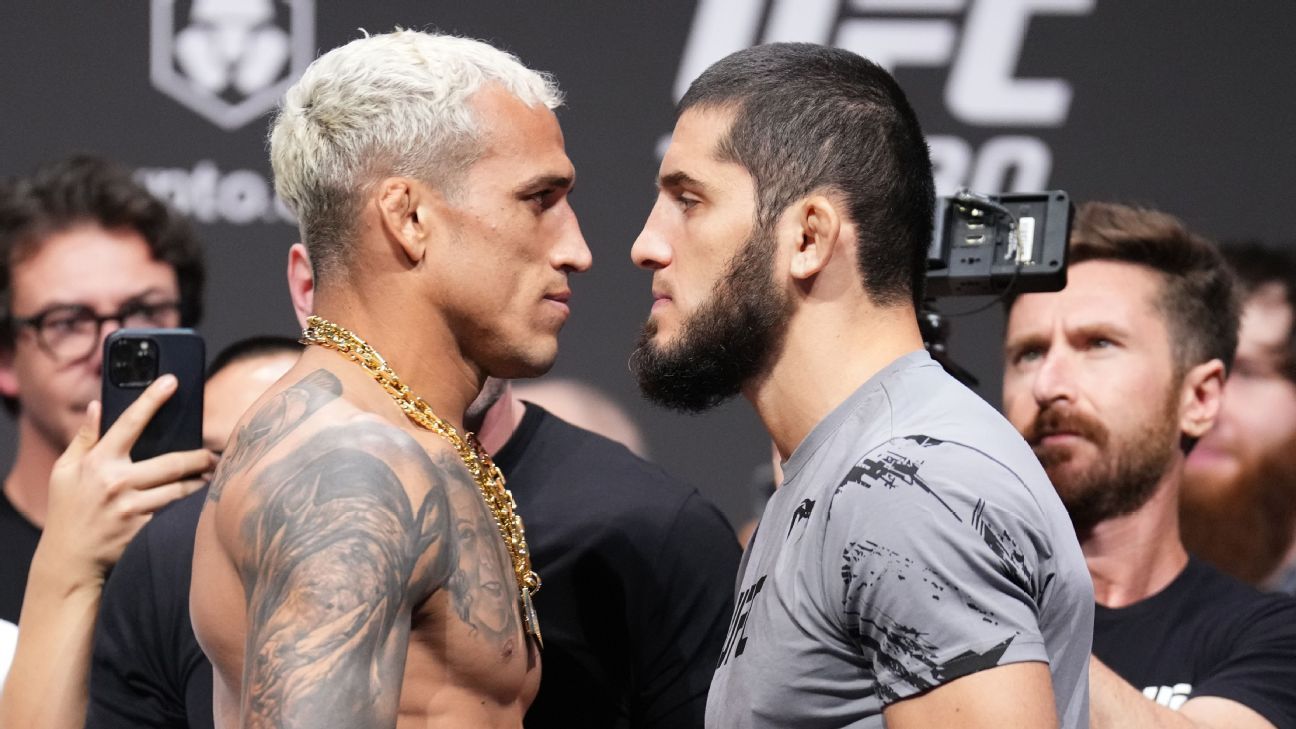 When Khabib Nurmagomedov vacated the UFC’s lightweight championship and retired from mixed martial arts two years ago, the sport’s expectations turned to his longtime teammate and protégé, Islam Makhachev. And now his time has come.

Makhachev (22-1) will attempt to win the UFC’s 155-pound title on Saturday when he meets Charles Oliveira (33-8) in the main event of UFC 280 inside Etihad Arena in Abu Dhabi, United Arab Emirates. The pay-per-view airs at a special time of 2 p.m. ET.

The timing of the matchup probably couldn’t be any better. Makhachev was always expected to fight for the belt at some point, and he will now do so against a foe in Oliveira whom no one wants to bet against. Oliveira has battled through adversity in each of his three title defenses against Michael Chandler, Dustin Poirier and Justin Gaethje before earning a finish.

The Brazilian fighter has won 11 in a row, securing 10 finishes in the process. The only reason he is not technically the lightweight champion this week is that he missed weight by one-half pound ahead of his most recent win against Gaethje in May.

In addition to the main event, bantamweight champion Aljamain Sterling (21-3) will defend his title against TJ Dillashaw (17-4), who surrendered it in 2019 after he tested positive for a banned substance. And fan favorite Sean O’Malley (15-1) will face the biggest test of his career in Petr Yan (16-3).

Follow along as Brett Okamoto, Marc Raimondi and Jeff Wagenheim recap the fights as they happen, or watch the card live on ESPN+ PPV.

As this meeting of top-10 205-pounders began, it appeared that Krylov might not make it out of the first minute, much less the full three rounds.

Blasted with punch after punch by Oezdemir and wobbled in the opening seconds, Krylov hung tough before eventually turning the tide and seizing control.

By late in the third round, it was looking like Krylov might be the one getting the finish, as he had an exhausted Oezdemir in deep trouble, but the fight went the distance and Krylov took the clear decision (30-27, 29-28, 29-28). It was just the second decision among his 29 career wins.

Krylov, a 30-year-old from Ukraine, won his second in a row after dropping three of four.

Oezdemir, who is 33 and from Switzerland, had strong moments beyond the fast start, but as the fight wore on, the No. 10 light heavyweight in ESPN’s rankings slowed down and appeared increasingly drained. He has lost three of his last four fights.

The fight was competitive, but Nurmagomedov, cousin of Khabib, was more aggressive and the better wrestler. According to UFC Stats data, Nurmagomedov racked up 7:55 of control time, mostly in top position. He ate a hard upkick from Omargadzhiev in the second round, but he wore the shot well and went back to controlling the Russian fighter on the ground. He dropped Omargadzhiev with a right hand on the feet in the third round.

This was Nurmagomedov’s first appearance since he picked up a win against Jared Gordon in March 2021. He is 2-1 overall in the UFC.

Omargadzhiev falls to 0-2 since earning a contract on Contender Series last year.

Petrosyan was the one wearing damage on his face at the end of three rounds, but looks were deceiving as the former kickboxing world champion controlled the fight from the get-go to win all three rounds (30-27, 30-27, 30-27) for his third victory in his past four fights.

Petrosyan, who is 31 and fights out of Armenia, maintained proper distance for much of what turned out to be a striking contest nearly from start to finish. Dobson did get three takedowns over the first two rounds, but seemed content to mostly stand and trade.

The problem for Dobson, a 30-year-old from Powell, Ohio, was that he didn’t trade enough. He bloodied up Petrosyan and landed the more telling punches, but his punches and kicks were relatively few and far between. Dobson threw less than half as many strikes as Petrosyan.

As a result, Dobson lost for the second straight time since joining the UFC last year off of Dana White’s Contenders Series.

Mokaev’s quest to become the youngest champion in UFC history is still in play, although it nearly took a disastrous turn in this fight.

Mokaev, who fights out of England, submitted Gordon with an armbar with just 34 seconds remaining in their 125-pound contest. The finish came after Mokaev himself was nearly forced to tap to a rear-naked choke in the second round. Gordon took the 22-year-old phenom’s back and threatened with the choke as the second round expired.

Gordon, 32, suplexed Mokaev in the third round and was in great position for an upset, but Mokaev found the finish late. He improves to 3-0 in the UFC, with all three wins coming this year.

“There’s a 10-year difference [in age] between me and this guy,” Mokaev said. “I’m 22 years old. This is my third fight in the UFC in six months. The weight cut is hard, but I have the best team.”

To become the youngest champion in UFC history, Mokaev will have to win the title by March 2024. He would beat the current record by Jon Jones if that happens.

Rosa absorbed a hard right hand to the face in the fight’s opening minute — and it contributed to her winning the bout. The 27-year-old from Brazil, who came into the fight with twice as many knockout wins as submissions, took the fight to the canvas shortly after being stung by that punch from Lansberg, a two-time Muay Thai world champion and multiple-time medalist.

Rosa immediately recognized that getting away from standup fighting was her smartest route to victory. And that’s what Rosa proceeded to do, taking down Lansberg three times over the first two rounds to control the bout and win (29-27, 29-27, 28-28) for the seventh time in her past eight fights. Rosa had a point deducted in Round 2 for a knee to the face of her grounded opponent.

Lansberg, who is 40 years old and from Sweden, has lost three fights in a row.