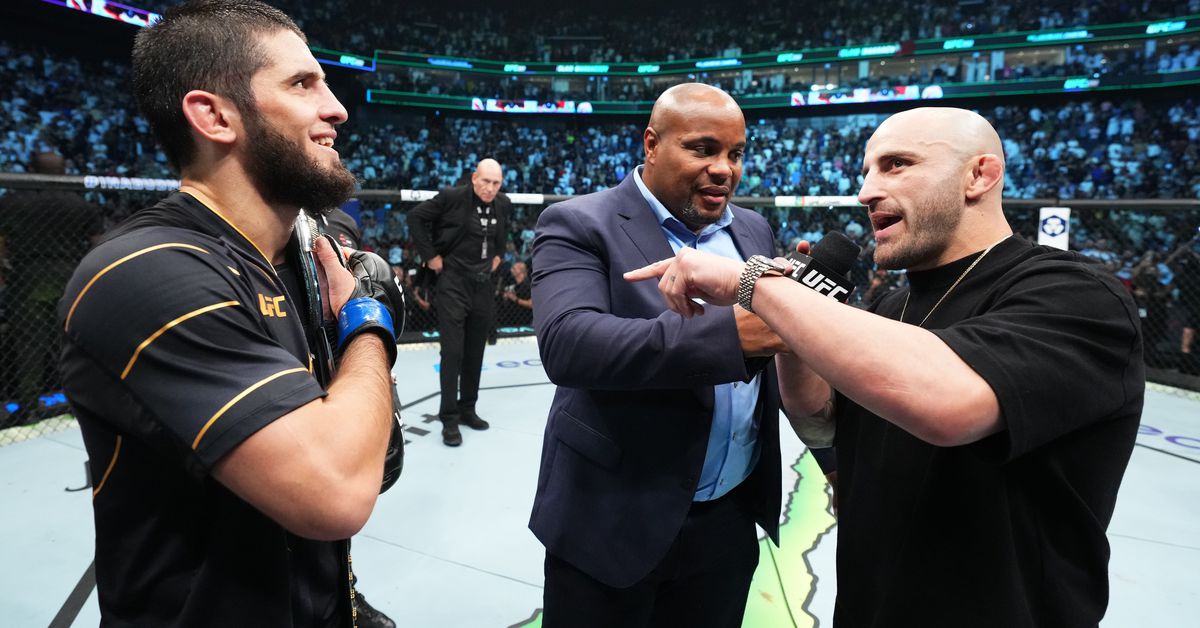 Who He Should Face Next: Alexander Volkanovski

It looks like Makhachev’s first title defense will come against featherweight champion, Alexander Volkanovski, since “The Great” went into the Octagon after the gauntlet was laid down by Team Khabib. While that isn’t great news for Beneil Dariush, who should rightfully be getting the next crack, it’s the most marketable fight at the moment especially if it headlines UFC 284 inside RAC Arena in Perth, Australia, Volkanovski’s home country. It’s an intriguing matchup all the way around since Volk’s is the pound-for-pound best in MMA at the moment, while Makhachev now sits at the top of the 155-pound weight class after such a dominant performance. Should Islam take out Volkanovski, it moves him right into the No. 1 spot on the pound-for-pound list. For Vokanovski, it’s his chance to become UFC’s next “champ-champ.”

Who He Should Face Next: Sean O’Malley….or Henry Cejudo?

Sterling upped his win streak to eight after disposing of T.J. Dillashaw to earn his second straight title defense. While the logical step would be to give Merab Dvalishvilli the next title shot, that won’t happen because he and Sterling are friends and training partners. Marlon Vera is there for a shot, as well, since he has won four straight, but UFC president, Dana White, did say that the winner of O’Malley vs. Yan would be getting the next title shot. And since “Suga” upset Yan, there is nothing left for White to do but to deliver on his promise. Of course, the outspoken UFC president did say he wouldn’t be opposed to a fight between Sterling and Henry Cejudo, so these days you just never know.

Who He Should Fight Next: Title shot?

As I just mentioned, O’Malley seemingly stamped his way to a title shot after edging out Yan, but I am positive he will be on edge — as we all will be in the coming months — to see if White will deliver on his promise. After all, many are crying robbery and saying Yan should’ve gotten the nod, so there is no telling if that will weigh on White’s mind when he makes that decision. And judging by these comments, it certainly seems like it, or White’s just trolling the media.

Who He Should Fight Next: Let’s wait and see…

I am all for champ vs. champ fights, but the only downside to that is that it forces the true No. 1 contender in a certain division — in this case it’s Dariush — to sit on the bench to wait and see how everything unfolds. Dariush won his eighth straight fight after defeating Mateusz Gamrot via unanimous decision, which is more than enough to earn him a shot against Makhachev. But since Volkanovski will likely get the first shot at dethroning the new champion, Dariush will either have to take another fight or possibly wait until mid-2023 to fight for the strap.

Who She Should Face Next: Alexa Grasso

Manon Fiorot earned the biggest win of her UFC career by defeating No. 1 ranked, Katlyn Chookagian via unanimous decision, improving her win streak to 10 in a row, five inside the Octagon. For my money, I think the fight that makes sense is between Fiorot and Grasso, who recently won her fourth straight by defeating Vivian Araujo a little over a week ago. Grasso is ranked No. 5 while Fiorot will move up a few pegs from the No. 7 spot after her latest conquest. The winner of this fight should get the next crack at Valentina Shevchenko.

Masvidal In Danger Of ‘Rocky’ Street Justice
Brendan Loughnane on 2022 PFL World Championship fight: ‘That money can change your whole family’s life in one night’
The 10 Best Fights Happening This Month | December 2022
On This Day – UFC 40
UFC 281: Adesanya vs. Pereira  ‘The Thrill and the Agony’ | Video