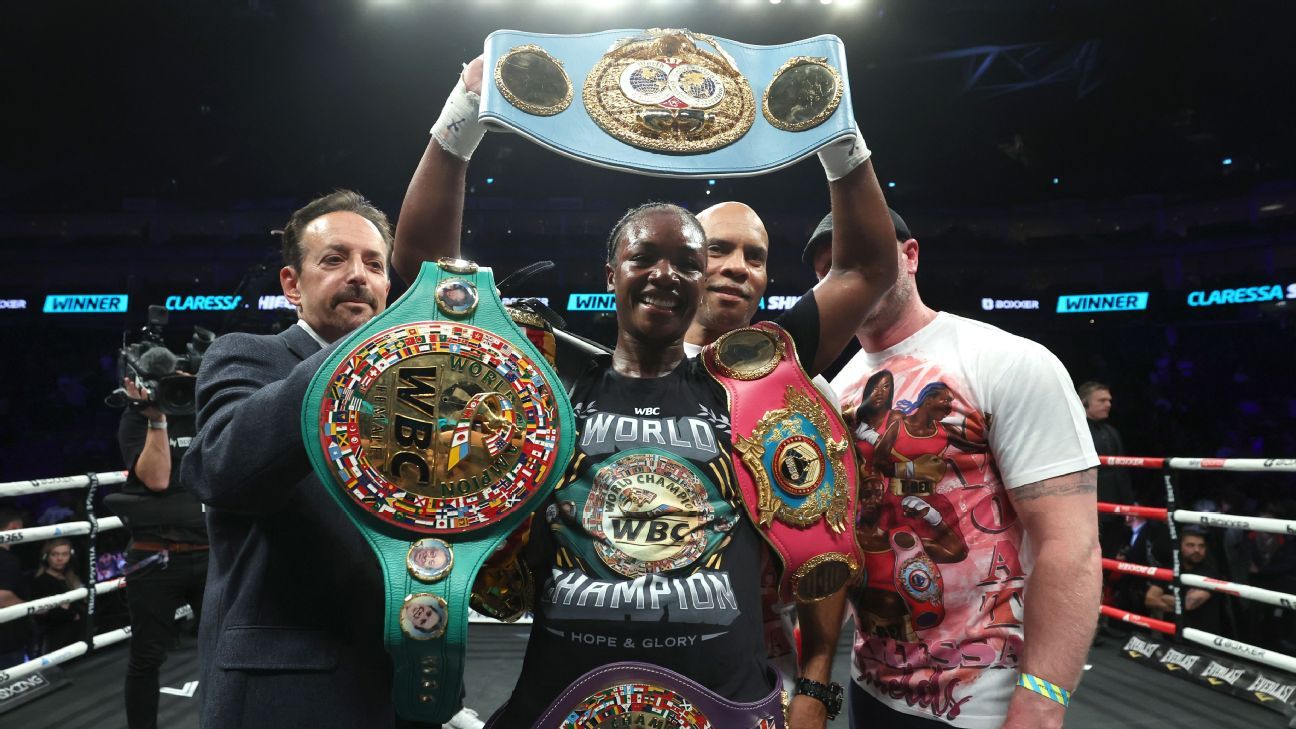 Undisputed middleweight champion Claressa Shields has her plan for the immediate future set, and it still includes both boxing and mixed martial arts.

Shields, who became the undisputed middleweight champion for the second time on Oct. 15 in a unanimous decision win over Savannah Marshall, told ESPN on Monday that she plans to return to the ring next before heading back to MMA.

The tentative schedule is for her to box again — defending her undisputed title — potentially as early as December, but if not at the end of 2022, it’ll be in the first quarter of 2023. After that, she’ll return to mixed martial arts training and either two or three fights with the Professional Fighters League.

Then, she plans to box a second time in 2023 to close out the year.

“With MMA, it is, you have to give it time, so that’s why next year I’m only planning on having two fights, at the beginning and at the end,” Shields told ESPN. “And next year, for MMA, it won’t just be fights, it’ll be training.

“So I have time to actually train so I can win these fights.”

Shields is 13-0 with two knockouts in boxing and 1-1 with one knockout in mixed martial arts.

The 27-year-old fighter said she was not sure who her opponent will be for her next boxing match, just whoever wants to “get smoked.” She did say she would like the fight to be a title defense at 160 pounds, where she is undisputed. She said her opponent is not expected to be Marshall, although she didn’t rule out a rematch with Marshall in the future, saying “it will come up again down the road, if she wants to fight me again.” Shields said any future fight with Marshall, though, would take place in the United States.

Beyond defending her middleweight belts, Shields said she is open to moving around divisions again looking for the best fights — anywhere from 147 pounds up to 175 pounds. She has been the undisputed champion at middleweight twice, and at junior middleweight once. She also held the WBC and IBF super middleweight titles.

“I had been wanting to fight at ’47,” Shields said. “Just whoever the girl’s that’s champion there never wanted to fight me.”

Shields said Cecilia Braekhus never wanted to fight her. The current undisputed welterweight champion, Jessica McCaskill, is fighting Nov. 5 — but at junior welterweight, where she is challenging Chantelle Cameron for the undisputed title in that division. Shields said she is open to fighting at welterweight if the matchup is right.

It will, though, be another busy year for ESPN’s current No. 1 pound-for-pound woman fighter.