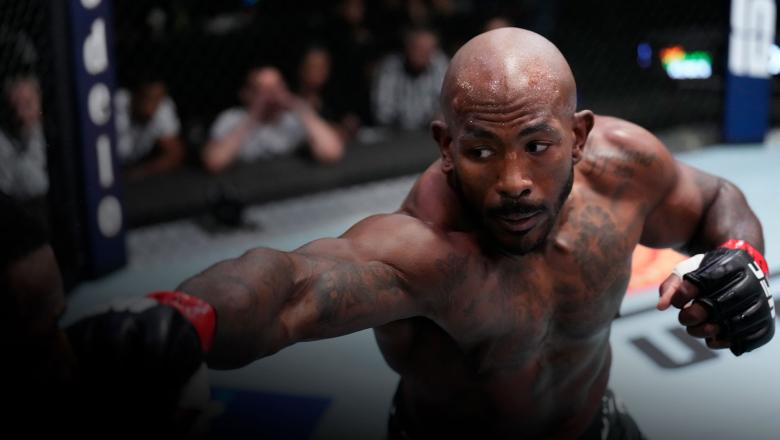 Since moving back to his hometown of Las Vegas following a couple years living in Thailand, Rountree has put together consecutive second-round stoppage wins, showcasing a menacing, aggressive style that amplifies his quick, powerful striking and makes him look like someone capable of making an expedited run towards the top of the division.

He’s shown flashes this dangerous combination of talent and demeanor in the past, like his punishing victory over Eryk Anders or his knockout win over kickboxing legend Gokhan Saki, but the consistency to replicate those efforts each time out has been missing.

But in each of his last two outings, a focused, determined fighter has marched into the Octagon and ended the night standing in the center of the arena, hand raised triumphantly in victory, and he’s working hard to reach the point where he’s able to replicate that each and every time he makes the walk to the cage.

“I can feel the satisfaction approaching,” he laughed, trying to articulate that combination of being happy with how things are going, but not yet completely content with where he’s at in terms of his preparedness and performance. “I feel like I’m approaching the satisfaction, if that makes sense, but it’s not all the way there yet.

As we hash out the “getting closer to satisfaction” piece, I explain that in talking about him and his upcoming fight, I’ve taken to reflecting on “the duality of Khalil Rountree Jr.,” a merciless, dangerous powerhouse in the Octagon who is also one of the more thoughtful, open, and earnest people I’ve had the pleasure of speaking with throughout my career.

I ask about flipping that switch — shifting from the guy I could talk to for hours about music and fashion and design into the guy that stormed through Roberson in March, putting him away with a thudding kick to the midsection while he was down on the canvas — and his answer is perfect.

“But all in all, you guys get to experience all of me,” he added. “It’s not that I’m one or the other — it’s the fact that everything you guys see is me.”

His honest, thoughtful assessment reminds me of something we discussed previously, and a quote he gave me about what he’s chasing and what he’ll be content with when the time comes that his career ends.

His focus was on learning, experiences, and growth, and while reaching the greatest heights possible was certainly an aim, it was only a piece of the larger overall picture.

I remind him of those thoughts, and ask him if allowing people to know more of him, all of him, is the greater goal of all of this, more than winning titles or rising to the top of the rankings.

“The goal is that as I’m fighting and climbing this ladder, people get to find out a little bit more and more each time.”