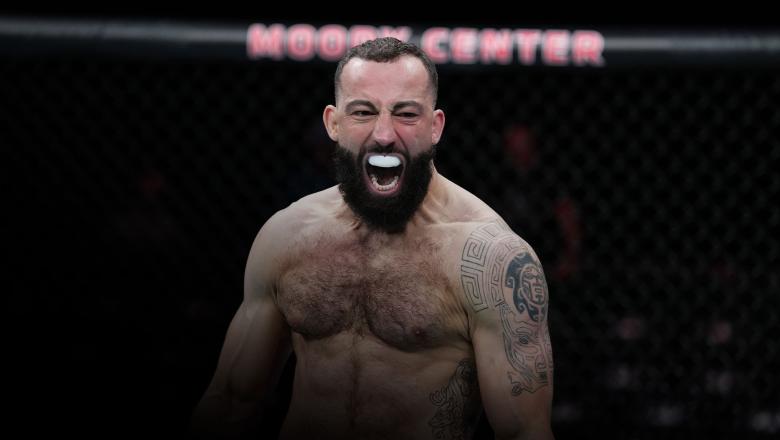 While he and many others still return home frequently and get solid work in when they are back in Georgia, his professional ambitions made it clear that he needed to surround himself with higher-level coaching and training partners if he wanted to reach those goals.

“Back home is good training — I love Georgia, I love spending a lot of time there — but there are some things that I don’t have there, like training partners and a little bit more high-level coaches,” explained Dolidze, who carries a 10-1 record into Saturday’s clash with Hawes. “I like the coaches back home, I work with them a lot, but here they have more experience, more experience with fighters competing in the UFC — they have fighters there, they know how it works, everything.

“The most important thing is sparring partners,” he added. “They’re very important, and I don’t have that at home.”

That ability to work with multiple big bodies also works to remind Dolidze that if the UFC is ever in a pinch and needs someone to step up on short notice, he’s more than capable of answering the call.

For now, however, he’s focused on middleweight, and the task at hand.

“I know he’s also a very talented fighter — a good wrestler, powerful guy,” Dolidze said of Hawes, who also earned an emphatic victory this summer in Austin, Texas, dispatching Deron Winn in the second round. “Everyone in the UFC is a good fighter, and everyone has their tools and weapons, but I’m ready for anyone. No matter how the fight will go — I will be there, and I will show what I can do.

“People may think I have a lot of experience, but I don’t — I’m quite new in MMA, and I’m learning from fight-to-fight,” added Dolidze, who transitioned from soccer to grappling before making the move to mixed martial arts at age 28. “For me, it’s important to learn something new every day.

“This fight camp, I trained well and I learned something new, and I’m better than I was before, and that’s important.”

And with his focus on improving and a chance to collect a third straight victory this weekend, Dolidze aspires to work his way forward in the middleweight ranks, but knows that only comes with handling business on Saturday.

“My future plans are big and I’m waiting for big things, and I want big fights, but let’s concentrate on this fight,” he said. “Win this fight first, take this step, and show them that I am ready for that.

“I just want big fights. I just want bigger names. We understand that in this business — if you are fighting big names, you are growing fast, and I want to be ready for that. I want to show to the organization that I’m ready.

“If I show with my fights that I am ready, I will get these fights.”