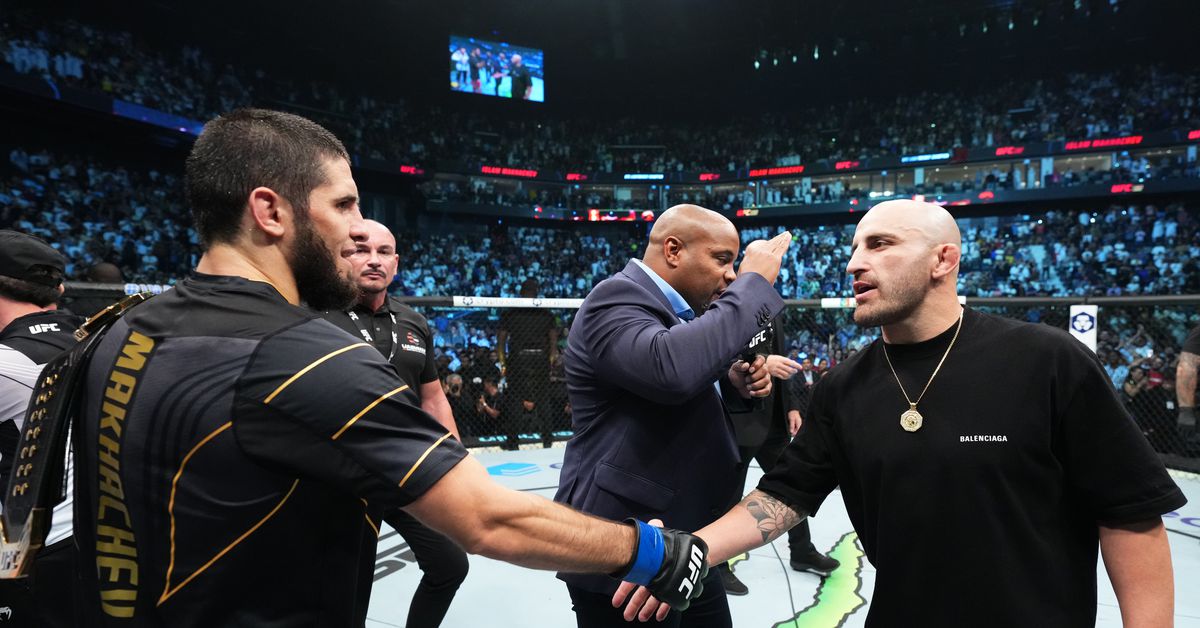 Alexander Volkanovski looks to make history in his expected next time out.

This past weekend (Oct. 22, 2022) at UFC 280 in Abu Dhabi, United Arab Emirates, Islam Makhachev dominantly captured UFC Lightweight gold, submitting Charles Oliveira in round two (watch highlights). The Featherweight champion, Volkanovski, entered the Octagon after he was called out by the new champion, and the two took their first good looks at each other.

UFC returns to Volkanovski’s home of Australia in Feb. 2023 for UFC 284, making it the seemingly perfect event to have a huge champion versus champion bout headline. Knowing what it’s like to hold and defend two titles, former titlist, Henry Cejudo, believes “The Great” has all the makings of being the best to ever do so.

“If for some reason, Volk, you end up beating Islam, Jesus, that puts you as the greatest champ-champ of all time,” Cejudo said on his YouTube channel. “You would just have to defend [the Lightweight title] one time. You will be the best champ-champ in UFC history.

Cejudo has been vocal about his interest in challenging Volkanovski for his 145-pound strap, but that hope has gone out the window with the Aussie’s inevitable stab at Lightweight gold.

Still studying the game closely and working with several top fighters down in Arizona, Cejudo believes in Volkanovski to get the job done. The limited time to prepare, however, leads to cause for concern.

“A taller guy, a bigger, stronger guy that has the ability of taking your hits and still moving forward,” Cejudo said. “A guy that eats, breathes, and tells you exactly what is it that he’s gonna do. He’s gonna take you down, he’s gonna smother you, he’s gonna make you get up, he’s just gonna beat you up, and I think you’re gonna need more time for that.

“I don’t understand why they’re doing Australia in February,” he continued. “So damn early, but what you are gonna need, Alexander — I know you have skills, but going up against a guy like this, you’re gonna need a lot more than four months. You’re gonna need the right training partners and the right coaches.”

In Oliveira, fans throughout the community expected the stiffest test Makhachev would face to date, and he arguably was despite the relatively one-sided nature of the bout. “Do Bronx’s” complete overall game was shut down by the consistently impressive smothering Sambo of the champion, never allowing Oliveira to present danger whether on the ground or striking.

Volkanovski is also one of the most complete fighters on the planet, resulting in his official UFC pound-for-pound No. 1 ranking, but the same ability to finish as Oliveira hasn’t been there. Therefore, Cejudo expects Makhachev to be a little too much.

“At least Charles Oliveira has submissions,” Cejudo said. “I’m sure Volkanovski can submit, but he hasn’t really shown that. I haven’t seen a submission from him. And then him on his back, and he’s shorter. I mean, there’s a bunch of short Dagestanis in Russia that they’re gonna be able to mimic that.

“But it could also be a plus for Volkanovski, too, but I think Volkanovski’s pound-for-pound title is gonna be short-lived, and I think the wrath of Islam Makhachev is just a little too much,” he concluded. “That’s a really strong debut to go at 155 pounds.”