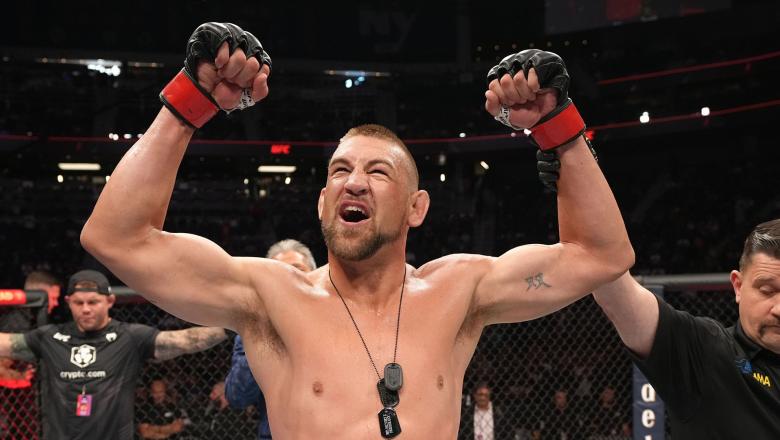 Jacoby was talking to himself, Cutelaba, and anyone else who would listen following a round to forget against “The Hulk” in which he was repeatedly taken down, losing a one-sided frame in the process.

“He took me down, and I’m like, okay, and I get back up,” Jacoby recalled. “Then he takes me down again and I get up. And it’s all the same takedown. Finally, about halfway through, I sat there and literally told myself, ‘All right, buddy, get it out of you.’ And I’m talking to myself and I’m talking to him a little bit, too. ‘Go ahead, keep going. I’m gonna beat you in round two.’”

Stay Up To Date With Everything UFC Fight Night: Kattar vs Allen

Jacoby won rounds two and three on two of the judges’ scorecards. One judge had the second for Cutelaba. When 15 minutes were up, a split draw was the verdict, but in a lot of ways it was a win for “The Hanyak,” who kept an unbeaten streak that now stands at nine heading into his Saturday bout with Khalil Rountree Jr. More importantly, it showed that in a situation where a lot of fighters would have packed it in, he fought back, never losing faith that he would eventually find a way to win. That grit comes with time, experience and often a lot of heartache. But now that he’s here and armed with that mental toughness, the No.13-ranked light heavyweight isn’t going anywhere heading into a fight that fans believe will be a standup showcase. Jacoby, a former Glory kickboxer, doesn’t disagree, but he thinks he has more tools to show on fight night than Rountree does.

Michael Chandler: ‘Dustin Poirier Is Losing Sleep’ Over Fouls, Not Me
Bo Nickal Reveals His UFC Targets For 2023
What to watch for in the 2022 PFL Championships
PFL World Championships 2022 video: Dakota Ditcheva demolishes Katherine Corogenes with first-round knockout
O’Malley: Next fight for UFC bantamweight title