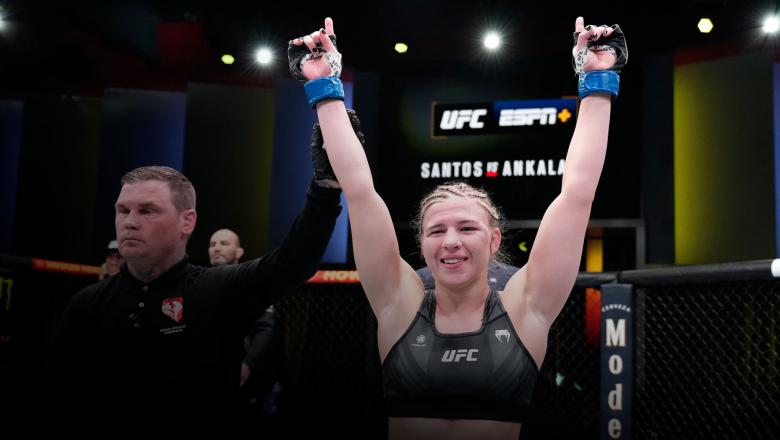 There is an understandable mix of frustration and anxiousness in Maverick’s tone, the mark of a fighter who doesn’t like spending extended periods on the sidelines and is chomping at the bit to showcase the improvements she’s continued to make since dominating Mazo earlier in the year.

She’d put in a full camp geared towards competing in August and was a day away from making the walk before the plug was pulled. After a couple quality meals, she had to quickly hit the reset button and grind through another grueling camp to prepare for Saturday.

And now, with short time before she finally gets to stride out to the Octagon again, Maverick is eager to stand opposite Young and prove once more that she’s the superior talent of the two.

“One of the comforts that I have is knowing how different of a fighter I am than I was, and I don’t know if she knows that,” she said when asked about facing a familiar foe. “I feel like she’s really underestimating my striking prowess now.

“I think she thinks (the first fight) was a fluke, and that’s what a lot of people say when someone loses by submission — ‘Oh, it’s just a fluke. You got caught.’ I hate those phrases because, in reality, your defense should come first, survival should come first.

“I feel like the same thing can happen in this fight if I want it to, though I plan on mixing in my striking better,” Maverick continued. “I feel more dominant than her in every area, really. If I wanted to keep it on the feet, I’m faster than her, and should be able to strike and outpoint her, and hopefully be able to get a knockout on the feet. If it has to be taken to the ground, so be it.”

If everything goes according to plan this weekend, Saturday’s fight with be a one-sided affair, with Maverick showing further improvements and development, proving she’s on a different level than Young, and setting her sights on someone further up the divisional ladder.

But if a date with a ranked opponent next time out isn’t in the cards, that’s fine, too — she’s more than happy to keep improving, keep stacking wins, and take her time getting back into the rankings.

“I’m hoping to use all the new stuff, but also go in there with way more intensity than I did in the Sabina fight,” said Maverick. “(I want to) just put on a show: show where I belong, show this fight is kind of low caliber for me and that I’m ready for a ranked opponent, ready to get in there and climb that ladder.

“After this fight, maybe I will get a ranked opponent — I’m definitely going to ask for a couple — but it’s one of those things where every contract gets better, and I’ll take my time climbing up the ladder; I have no reason to rush it.”