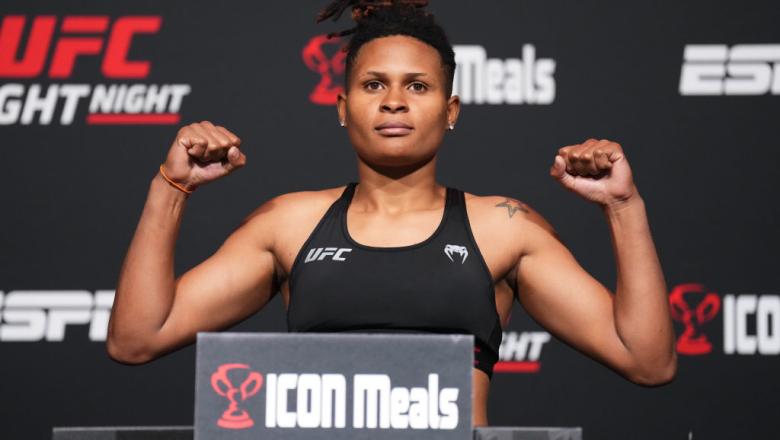 “She laughed at me and said I wasn’t going to make it, that I needed to have the same job she had, collecting garbage,” Vidal told UFC.com. “I started crying because I was very young, but I kept my head up and showed her I can do it.”

Vidal looks on her road to the UFC fondly. She worked as a bricklayer’s assistant, a fact in which she takes plenty of pride, calling it “honest work.” Her motivation to achieve her dreams never wavered.

After training at what she described as a “social project,” someone introduced Vidal to Márcio Panda and Team Brothers in Niterói. There, she found the home she was looking for to launch her MMA career.

“He welcomed me, believed in me, and asked me if I really wanted to fight,” Vidal said. “I told him in a very composed way that I did. He’s supported me since day one and welcomed me as if I were his daughter. That’s just priceless.”

MORE FIGHT NIGHT: Fight By Fight Preview | Fighters On The Rise | Marina Rodriguez’s Will To Be The Best | Daniel Rodriguez Is Fired Up | What Sets Amanda Lemos Apart

As Vidal prepared for her first amateur fight, she found out someone on the same card fell out of their matchup. Panda asked if Vidal wanted to step up, but the catch was that the fight was a professional one. With no experience, Vidal turned pro and earned a victory.