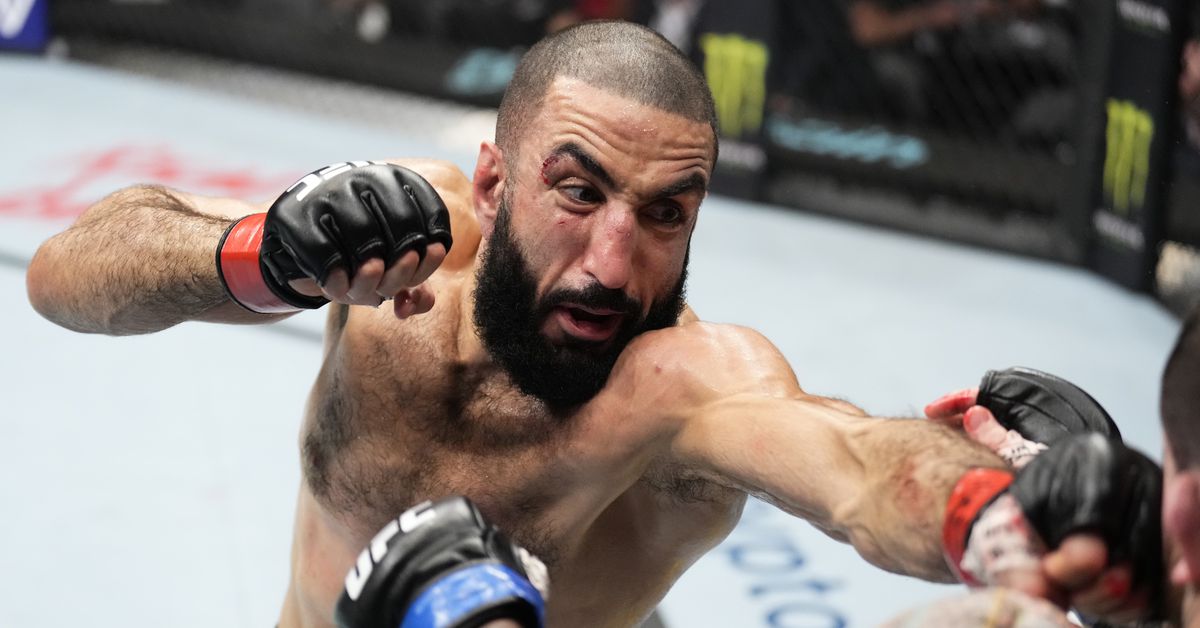 Belal Muhammad made quite a statement at UFC 280 with a second-round knockout of previously undefeated welterweight Sean Brady, and now he’s looking to do the same thing in his next fight.

The only problem is, Muhammad wants the opportunity to face Khamzat Chimaev after calling out the Chechen fighter for the better part of the past two years. Even in the aftermath of his win over Brady in Abu Dhabi, Muhammad heard the UFC was targeting Chimaev against Colby Covington in early 2023. It’s just a matchup he doesn’t see happening.

“I think that’s literally the only fight to me,” Muhammad told MMA Fighting when addressing the Chimaev fight. “For me, it’s Leon [Edwards] or Khamzat, and I think that us two makes the most sense.

“I know they’re talking about Colby, but I don’t think Colby’s going to take that fight. Colby hasn’t taken a hard fight or a fight against a guy coming off a win since Kamaru [Usman]. Kamaru is the only guy he’s fought in his last eight fights that wasn’t on a two-fight losing streak.”

Covington has largely stayed silent for the past six months after defeating Jorge Masvidal in March. Lately, the two-time welterweight title challenger has been fighting Masvidal in court after the two got into a physical altercation. Masvidal was charged with multiple felonies, including aggravated battery and criminal mischief, but the court case has been delayed several times as prosecution and defense teams work through various issues before a potential trial.

None of that would necessarily prevent Covington from competing again, but the always-outspoken fighter hasn’t made any public statement about his return to action since the incident occurred. Interestingly, his attorneys have claimed he suffered a brain injury in Masvidal’s alleged attack.

Muhammad doesn’t understand why Covington continues to be ranked in the welterweight division given what he considers a less than impressive resume.

“Colby, he gets the credit as the guy that would be the champion if Kamaru wasn’t there, but who’s he beat?” Muhammad said. “He beat Masvidal on a three-fight losing streak. He beat [Tyron] Woodley on a five-fight losing streak. Other than that, it’s been nothing but lightweights. Why is this guy getting all this credit in the world when I’m the guy that’s beating ranked guys?

“I beat [Vicente] Luque, who was on a seven-fight winning streak. I just beat ‘Wonderboy’ [Stephen Thompson], who was 3-1 out of his last four [fights]. I just beat this kid [Sean Brady] who was 15-0. I’ve beat four top-10 guys in the last year. The only other guy that’s beating top-10 guys in the last year is Kamaru Usman. Nobody else is beating multiple top-10 guys. Even Khamzat’s only win against a ranked guy is Gilbert Burns, and that was a close, split decision, and he came in nine pounds over weight for his last one. I think I’m right underneath Kamaru [and] should be No. 2 in the division rankings-wise. The fact that they still have Colby there doesn’t make any sense.”

While Muhammad won’t completely discount Covington as a welterweight contender, he truly believes he presents more problems to Chimaev. With strong wrestling, conditioning to fight hard for 25 minutes and punching power in his hands, he loves his chances against Chimaev.

When it comes to promotion, where Covington is known to target opponents with trash talk to drum up interest, Muhammad hasn’t seen enough proof that those antics have transformed into television ratings or pay-per-view buys.

“Why are you pushing that one so hard? Because Colby’s going to say stupid things at a press conference to get him revved up?” Muhammad said. “I think people would definitely want to see me versus Khamzat. It’s going to get the same amount of eyes, same amount of views. It’s a more meaningful fight for the division than the Colby fight.

“Yeah, Colby’s going to say some outlandish stuff, he’s going to get some clickbait out of it, but I don’t think he’s a pay-per-view draw that Conor McGregor is or Masvidal is. He’s not that guy. There’s nothing to gain from pushing that Colby fight. Me and Khamzat are the only ones in the division winning right now. We’re the only ones active right now. I think we should be the ones in the cage.”