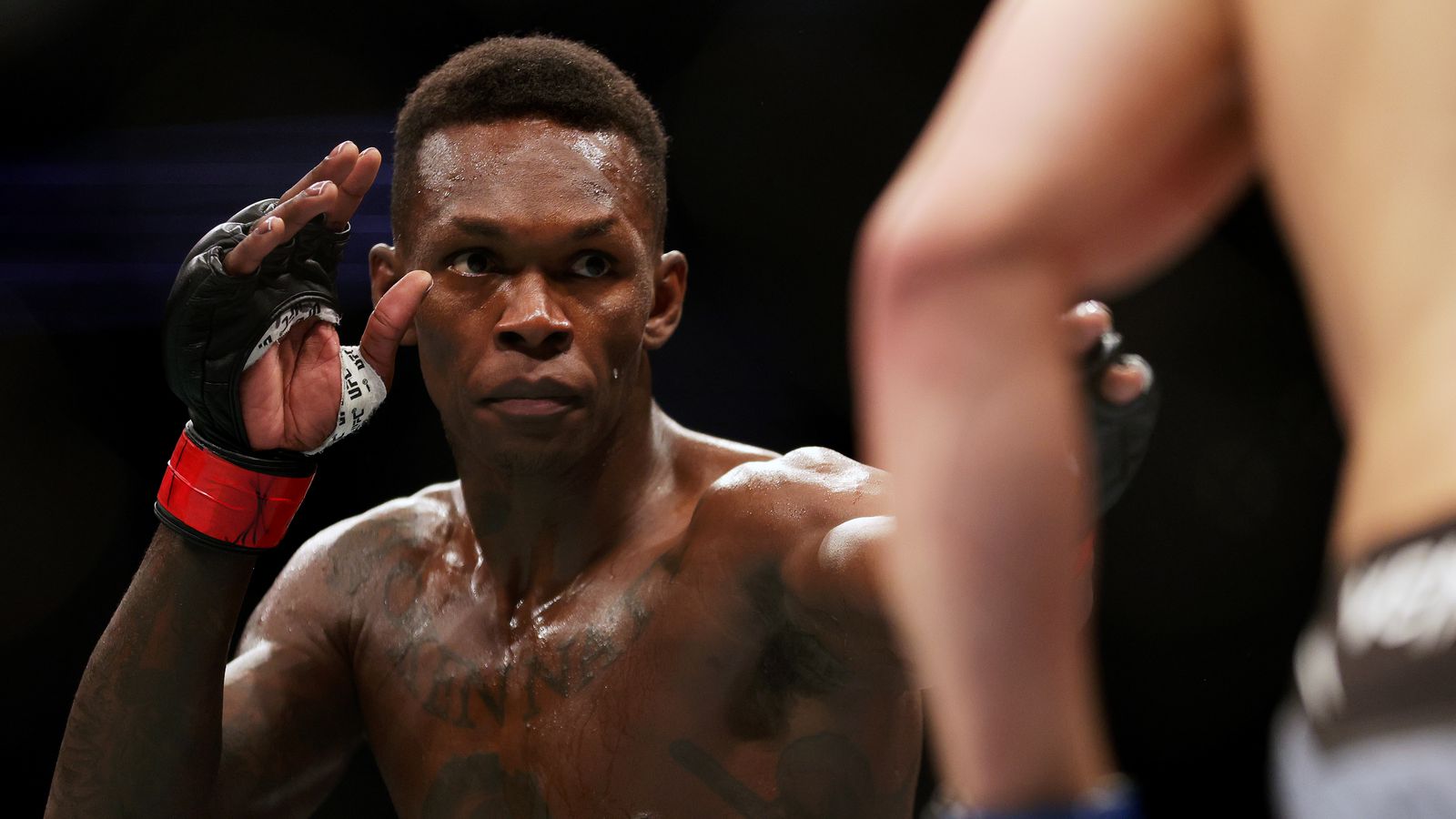 Keep in mind that we will also be the spot for the latest news, recaps, and post-fight analysis following “Adesanya vs. Pereira.” Without further delay, see below for the latest UFC 281 main card PPV results. (Note: This will go from the bottom up; therefore, scroll toward the bottom for the latest detailed round-by-round action.)

Adesanya head kick blocked. Pereira goes low kick to head kick, eats one to the calf. Solid Adesanya body kick, eats another low kick in return. Pereira with his own body kick. Low kick comes back at him. One minute to go. Pereira lands a body kick, misses on the left hook, then tries a flying knee. Adesnya grabs a body lock, eats good shots downstairs. They separate in the waning seconds. With less than five seconds to go, Adesanya knocks Pereira silly with a right hand. The bell sounds and Adesanya gets one more clean hook in before the ref can end the round. 10-9 Adesanya.

Round 2: Impressively, Pereira’s good to go for the second. Adesanya going back to the low kicks. 1-3. Adesanya knee, Pereira body shot. Pereira just misses with a wheel kick. Stiff counter jab lands for Adesanya. 1-2. One minute in. 1-3 from Pereira. Still stalking forward. Straight left by Adesanya. Another, then an inside low kick. Head kick attempt, clean jab. Stiff jab from Pereira gives him some pep. Hard punches from Adesanya in the clinch two minutes in. Trading knees. Adesanya changes levels, can’t complete it. Pereira lands an elbow on the break and eats a hard 1-2 for his trouble. Two minutes to go.

Round 3: Trading jabs to start. Low kick from Adesanya, both try head kicks. Good right cross. Body shot met by a cross from Pereira a minute in. Hard body knee by Pereira. He looks to chase and Adesanya catches a kick for a takedown. Adesanya looking for the back, dropping punches. Two minutes in. One hook in against the fence. Solid control as Pereira tries to stand. Steady punches. Two minutes to go.

Pereira works his way up, Adesanya still attached. Rolling kneebar attempt for Pereira, can’t get it and ends up on his back. Full guard. Both land good elbows with a minute to go. Solid left hand from Adesanya. He stands over Pereira, lands a good axe kick downstairs, and drops punches until the bell. 10-9 Adesanya.

Round 4: Back to the low kick goes Adesanya. Head kick attempt. Pereira falls short with a left hook, eats another low kick. One minute in. Stiff jab from Adesanya, right cross behind it. Pereira backs him to the fence, eats a pair of 1-2s. Low kick to body kick from Adesanya. Two minutes in. Another body kick lands for him. Low kick. Pereira’s output has dropped quite a bit. Double left by Adesanya. Adesanya fakes a shot, grabs the body lock, and puts him on the fence with two minutes to go.

Round 5: Pereira marches through body kicks to back Adesanya up. Trading inside, Adesanya can’t find the trip. More pressure from Pereira, hard lead right. Adesanya ties up, eats a knee downstairs, and puts him on the fence. They separate a minute in. Adesanya fires a low kick and appears to hurt himself, falling back and trying to roll away. He manages to tie up and land an elbow on the exit. He goes right back to throwing that low kick so I guess he just slipped. 1-2 from Pereira and an uppercut behind it. Big left hook and Adesanya is hurt! Pereira pouring it on! The punches continue to pile up as Adesanya slowly crumples against the fence and the ref intervenes before he can fall all the way down.

Round 1: Right cross lands for Esparza as Zhang fires low kicks. Another right hand by Esparza set up by a fake level change. Jab and low kicks from Zhang. One minute in. Body kick. She’s pressuring but not committing to anything big. Left hook from Esparza, eats another low kick. Those are working for Zhang. 1-2 downstairs. Esparza falls short with a flurry two minutes in. More low kicks. 1-2-head kick-body kick from Zhang. Esparza catches the body kick and Zhang tries to jump directly onto her back. Nice elbows from the rear crucifix and the scramble continues. Two minutes to go.

Esparza rolls through as Zhang pounds from mount and threatens the back, ultimately landing in top guard. Dropping elbows. Zhang threatens with upkicks and they trade heat as she stands. One minute to go. Esparza shoots, denied, avoids an uppercut. Zhang looking more aggressive. She has another body kick caught but again wins the scramble, slamming home elbows. Heavy blows from half guard. Esparza regains full, attempts an armbar, and stands at the bell. 10-9 Zhang.

Round 2: Zhang stalking forward. Jab exchange. Counter right by Zhang as they trade. Blast double from Esparza and Zhang looks for the rear crucifix. She’s got it and she’s looking for the Kadowaki Special RNC. It’s deep and she’s got it. Zhang Weili is once again your UFC Strawweight Champion.

Round 1: Chandler falls short with a leg kick. Solid straight right. Triple body kick. He shoots, denied a minute in. Body shot answered in kind. Chandler low kick. Long flurry met by a jab from Poirier. Heavy right from Chandler and he’s looking to attack against the fence. Hard body shots two minutes in. Poirier knocks him back with a straight left. Two more. Chandler comes back with a straight right and lands a glancing overhand. Good right hook by Poirier and a low kick behind it. Another straight left. Chandler fakes a shot and backs Poirier up with some huge punches. Chandler teeing off on the fence and takes him down into half guard with two minutes to go.

Poirier trying to use the fence to stand, avoids a back take. Back down back up, bit suplex by Chandler. Poirier works his way up and throws heat on the break. Now it’s Poirier throwing heat but Chandler blasts him with some huge right hands to back him off. Poirier’s hurt but he comes back with a right hook that drops Chandler in return. Poirier throwing everything and the kitchen sink at Chandler, who somehow survives the round but gets an elbow at the bell for his trouble. 10-9 Poirier.

Round 2: Poirier opens with a straight left. Chandler fires some big punches and slams Poirier to the mat with a double-leg. Short punches from Chandler in guard. Poirier trying to set up a triangle. Christ, Chandler’s nose is pouring blood. Chandler looks for the back, has a hook in. Fighting for the RNC two minutes in. Both hooks in. Thumbs-up from Poirier as he defends. Chandler still chasing it. Two minutes to go.

Poirier regains half guard and scoots to the fence. Solid shots from Chandler. Poirier stuck against the fence, eats a ton of shots to the back of the head. One minute to go. Poirier weathers the storm and regains guard. 10-9 Chandler.

Round 3: Straight left from Poirier to open the round. Low kick. He’s on the front foot. Head kick attempt. He denies a shot, eats a right hand. Chandler low kick a minute in. Chandler shoots and hits a huge lift, but Poirier spins into top position when Chandler tries to jump on his back. Now Poirier’s on his back with the body triangle. He clamps down on a crossface, worms his forearm under the chin, and forces Chandler to tap.

Round 1: Gutierrez already letting the kicks go. Low kick lands for Edgar. Good exchange and Gutierrez sneaks in a spinning back fist. Nasty calf kick a minute in. He tries a spinning back kick. Quick jab. He’s doing a good job at keeping Edgar at range so far as he circles. Edgar tries a head kick. As he looks to force his way into range, Gutierrez is there to meet him with a jump knee that lands flush and puts “The Answer” to sleep.

Round 1: Low kick from Hooker. Head kick falls short, low kick doesn’t. Hooker continuing to fire kicks from range. One minute in. Snap kick downstairs. Puelles tries an Imanari roll, but he’s initially too low. Continuing to try and force the scramble two minutes in. Hooker figure-fours his legs to protect himself and they’re in a weird stalemate. Puelles manages to break the figure-four and goes for a heel hook. Two minutes to go.

Hooker seems safe and is content to let Puelles squeeze. He works his way free and settles on top, then lets Puelles up after a perfunctory leg kick with a minute to go. Puelles tries another roll, can’t get it, briefly tries to butt-scoot after him. Straight right by Hooker. He pressures and Puelels fails to pull guard. 10-9 Hooker.

Round 2: Puelles shoots, denied. Low-high combo from Hooker. Puelles throwing more kicks, has to block a head kick from Hooker. Hooker lands another straight right and avoids a level change. Another reactive shot fails for Puelles, who didn’t even get close. Good hook from Hooker in response. One minute in. Solid left hook from Hooker and Puelles catches a kick, only to bail when Hooker threatens a guillotine. Puelles appears to claim an eye poke. Another failed Imanari roll. He tries a low single, can’t get it two minutes in. Two more failed level changes. There’s a better shot but Hooker still sprawls on it without issue. Attacking the body from the sprawl with two minutes to go.

Puelles desperately lunges after him, then lands a left hand when he stands. Puelles eats a hard body kick and appears to fold a bit, then fails to pull guard. He’s getting slower to get up. Failed cartwheel kick. Another body kick and this one drops Puelles for real, forcing the ref into action.

To check out the latest and greatest UFC 281: “Adesanya vs. Pereira” news and notes be sure to hit up our comprehensive event archive right here.