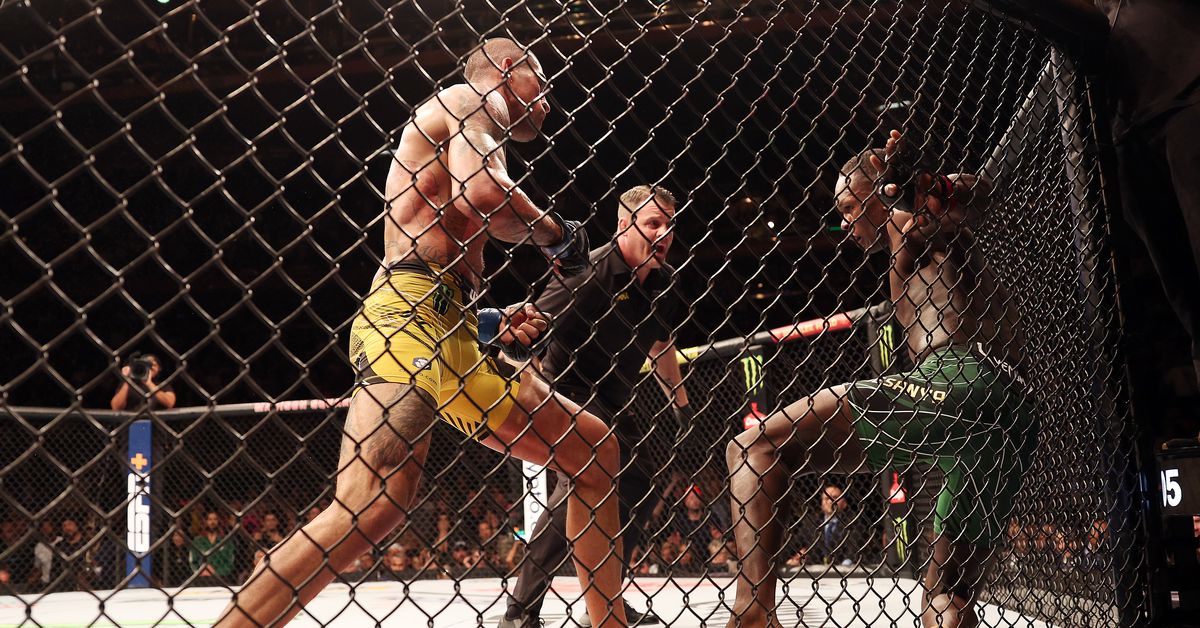 Israel Adesanya doesn’t blame Marc Goddard for the stoppage against Alex Pereira, but he does think it wasn’t necessary.

Adesanya lost his middleweight title to Pereira at UFC 281 after Pereira authored an epic comeback in the fifth round to earn a standing-TKO victory. In the immediate aftermath, Adesanya protested the stoppage as early, saying he he was not in serious danger, and speaking with Ariel Helwani on The MMA Hour, “The Last Stylebender” talked through the ending of the fight, explaining his perspective on the finish.

“I don’t blame the referee,” Adesanya said. “Marc did a good job, but you see it when I get up. I’m fine. I was lucid. I didn’t get rocked rocked. I got hit hit against the fence and my thought was, ‘Escape, laterally, either left or right.’ I went right and as I was going right — it wasn’t because I was rocked, it was my foot. You know the perineal [nerve]? It happened to Michael Chandler, [Henry] Cejudo, our boy, Jimmy Crute, it happened to him as well.

“So at some point in the fight, I’m trying to move. … You know when you’re walking and your leg trips and it drags on the floor accidentally? I was getting that through the fight, and I’m like, ‘Is something wrong with my leg?’ And eventually I was like, ‘Oh s***, I think my leg is that thing.’ I’ve never had it happen to me in a fight before, ever, but I knew what it was. So he hit me with two big shots, lateral move … and then I tripped. So it looked bad. I think the referee was like, ‘Two big shots and he wobbles, oh s***.’ It wasn’t from the shots, I promise you. There’s no reason for me to lie. It was from the legs, which he caused, the damage.

“So I was like, ‘OK, stand there, stand there, just don’t move anymore, let him gas out,’” Adesanya continued. “So I was waiting for him to take big shots, so I put my head down; I could see his arms and I could see his legs. That’s all I needed to look at. I know where his head is. So I’m just there moving, moving, moving. But to the referee, after two big shots and then I wobble, and I’m standing there looking like that, he’s going to be like, ‘Nah.’ And he’s being safe. So when he jumped in I’m like, ‘I’m fine. Aw, f***.’ I was literally just disappointed. I was waiting for him to gas out so I can do my work. I was going to take him down and then beat him up again.”

Adesanya never got the chance to do so. Goddard jumped in at 2:01 of the round, ending the fight. And while Adesanya can understand why the referee did so, the former middleweight champion notes Goddard was also the referee in his fight against Kelvin Gastelum at UFC 236 and allowed that fight to continue, despite Gastelum being dropped repeatedly in the final round.

“Again, I’m a champion. I don’t blame him. Marc’s a good referee. But you reffed the Gastelum fight, you’ve seen where I can go to, you should have that kind of faith in me. Also, you gave Kelvin Gastelum every chance, after he got the most in any title fight in the UFC’s history. I didn’t get dropped. Yeah, I got wobbled, but I wobbled because of my leg. … Again, you’re under the pump, it’s a big show, it is what it is.”

Despite disagreeing with the stoppage, Adesanya credits Pereira for creating the circumstances for the finish by attacking his legs early in the fight. That damaged him, slowing his movement and setting up the finish.

“I did everything in my power to make sure I was ready for this fight,” said Adesanya. “I was the best I’ve ever felt. Literally the best I’ve ever felt. I got compromised. It was a smart move. Because a guy like me, with great footwork, what do you do? Take away the tires. So early on he did, and I didn’t think it was going to affect me, but it paid dividends.”

The loss is Adesanya’s first in the middleweight division and now raises the question of what comes next. Even though he’s now 0-3 against Pereira, factoring in his two kickboxing losses, UFC President Dana White already suggested an immediate rematch could be in the offing.

But for Adesanya, he’s not focused on that at the moment. For now, the former champion simply wants to have some time off to recuperate after fighting three times in 2022.

“I haven’t thought about that,” he said when asked for a return timeline. “I get to enjoy Christmas and New Year’s and a nice Kiwi summer for the first time in years, without any looming fight on the horizon. Since before my UFC debut, I would fight either January or February, and I’d have to train through those. I’ll eat, I might drink a little bit, go out, maybe go to a New Year’s gig. I haven’t really enjoyed it, so this New Year’s and Christmas, I’m going to really enjoy myself and just chill. I’ll travel maybe, and help my teammates as well. Help them get ready for their respective fights, but I deserve this. I earned this. It was my third fight in 10 months, as a champion, putting it on the line every single time. So I earned this.”