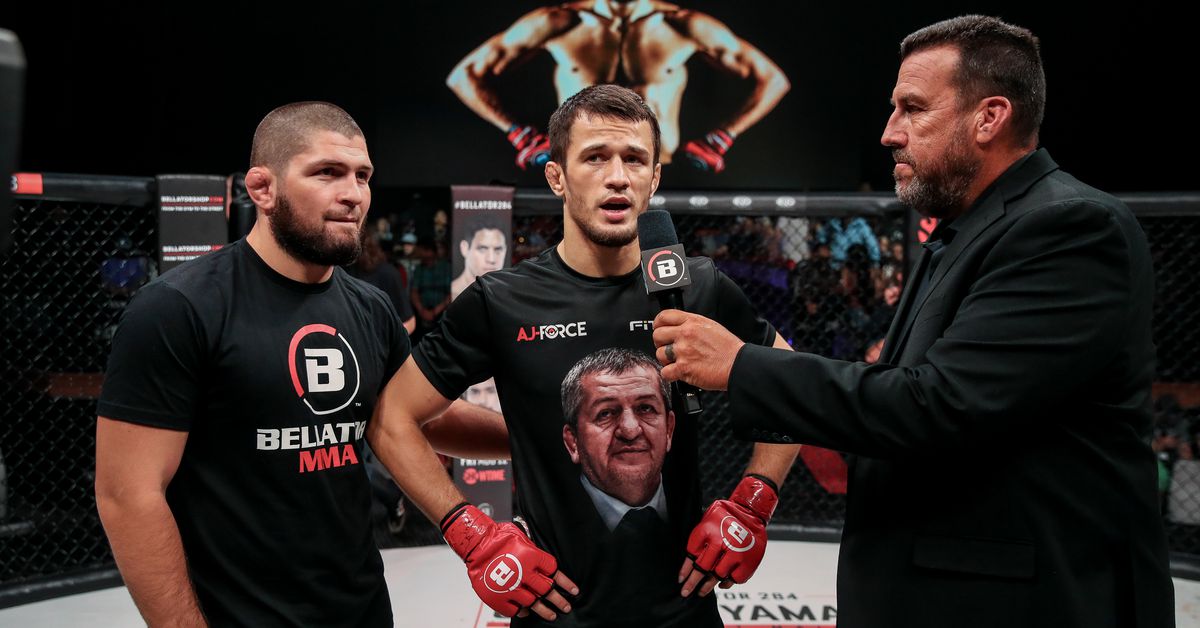 The cousin of retired UFC legend Khabib Nurmagomedov — who now serves as Usman’s head coach — and nephew to the late Abdulmanap Nurmagomedov, the 24-year-old lightweight comes from a lineage known for creating champions. Sadly, Abdulmanap passed away in 2020, but Usman plans on fulfilling the promise his uncle saw in him when he battles Patricky Pitbull for the Bellator lightweight title at Bellator 288 on Friday.

“For me [this fight], it’s all the hopes and dreams my uncle has put into me,” Usman told MMA Fighting. “I just don’t want to let him down. I want to take this belt, inshallah, and it put in our school of Abdulmanap.”

While Abdulmanap is gone, Usman is proud to have his cousin Khabib lead his daily training sessions, which also carry on the family’s legacy.

Usman says that the former UFC lightweight champion learned very well from his father because they are almost a mirror image of each other in the gym.

In addition to having Khabib as a coach, Usman Nurmagomedov also counts new UFC lightweight champion Islam Makhachev as one of his main training partners on a daily basis.

The two fighters were constantly sparring leading up to Makhachev’s win over Charles Oliveira at UFC 280 and that training was invaluable as Nurmagomedov prepared for his own title fight.

Those intense training sessions give Nurmagomedov all the confidence in the world to know that everything “Pitbull” can do, Makhachev absolutely does better.

“Having Islam as a sparring partner, we had sparring in Dubai, we have camps with Islam together. Islam is very good,” Nurmagomedov said. “He took me to the waters that I haven’t been to before. I feel like Pitbull can’t match that.

After working with Makhachev for so many weeks leading up to his fight, Nurmagomedov was proud to see his teammate achieve his dream of becoming UFC champion.

That also served as additional inspiration for Nurmagomedov as he seeks to do the same thing when he competes Friday night.

“Honestly, I was very happy when I saw him take that title,” Nurmagomedov said about Makhachev. “I was very joyful. It was all the plan of our uncle come to life. I had feelings of happiness and I had feelings that I’m supposed to be the next guy to make our team happy.

“But Islam has deserved this for a while now. He just had a lot of people running from him but now all the focus is on him as a champion and he will fight any contender. He will not shy away from any contender because he’s never done that.”

If all goes well on Friday, Nurmagomedov will claim the Bellator title and his team will possess two of the most coveted championships in the world in the lightweight division. Many believe Khabib could be in line as a potential coach of the year candidate for all the success he’s had since transitioning to that role after retiring from his own fight career.

His cousin won’t disagree with any accolades heaped upon his team but Usman is also humble enough to allow others to make that distinction for him. That’s why Usman won’t make any bold claims when asked what it would mean for his team to potentially boast the two best lightweights in MMA.