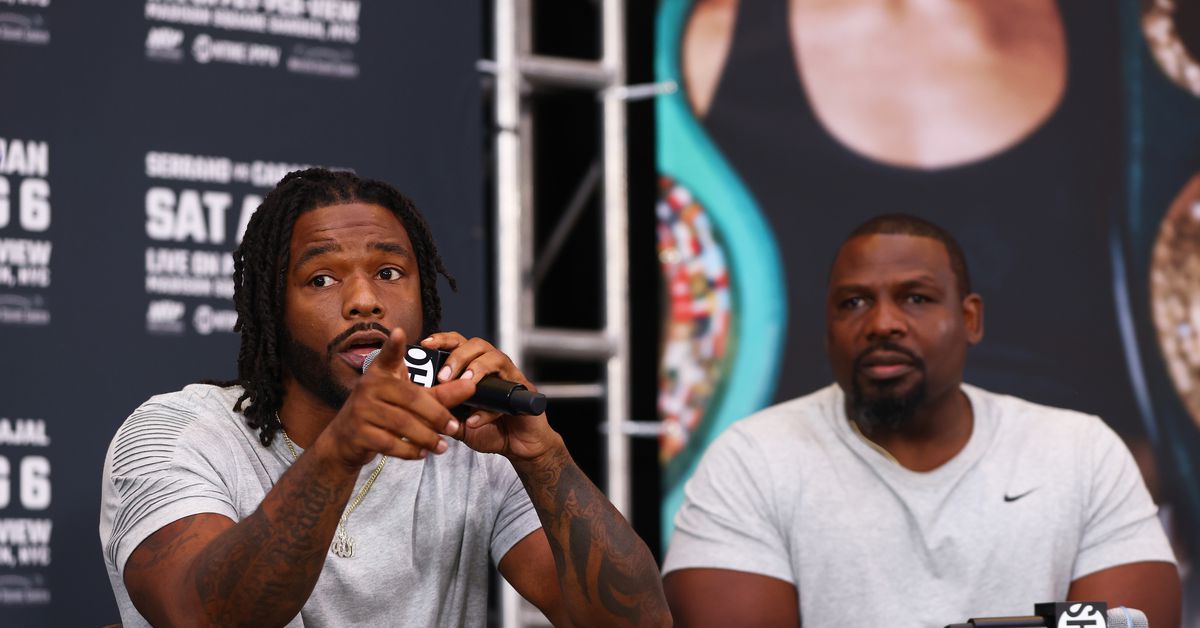 “Gold Blooded” Rahman Jr. is looking to rebound after his first career loss, which dropped his record to 12-1. Hardy needs little introduction to the familiar faces ‘round these parts, but suffice it to say this is a big step up in experience, if not size for the 1-0 pro boxer whose MMA career ended at 7-5 with 1 “No Contest.” Hardy is a late-notice replacement for a more equal-sized opponent, Vitor Belfort, who had to withdraw earlier this week after falling ill, supposedly with Covid per reports.

The other “stars” of this card are all young and from the social media scene and scarcely have a professional bout between any of them. That’s not stopping them from stepping into the squared circle to get punched by their fellow neophytes, and we’re gonna watch them, too. The featured bout from the influencer scene is Nurideen “Deen the Great” Shabazz (1-0) taking on Walid “Sharks” Muhsein (0-0-1).

Round 1: This isn’t the main event, it turns out, but it is in our hearts. Rahman in purple trunks and repping the Baltimore Ravens (his hometown, not a troll to the former NFL defensive end, one would assume). Hardy in black. Quick lead left from Rahman. Body jab, too. Rahman trading a bit, but he’s a lot quicker than Hardy and hasn’t been caught by the much bigger man. Left-right from Hardy. Counter left lands for Rahman. BIG left for Rahman and Hardy isn’t steady on his feet. Rahman isn’t following up on it, however. Hardy is finally able to get the smaller man up against the ropes and is throwing heavy punches. Sweet counter left from Rahman lands clean.

Round 2: Quick left hand lands for Rahman. Hardy surges forward with a right. Hardy gets in a right cross and he’s got Rahman up against the ropes. Rahman loses his mouthpiece and he’s not moving his feet. Hardy is teeing off on him and landing a lot of shots. Rahman isn’t going down and maybe he should. Big punches landing for the big man. Finally Rahman breaks free and the ref pauses the action to give Rahman his mouthpiece back. Rahman not looking cleaned up just yet. He’s doing a bit better than he was a minute ago. There’s a left, but he at a lot of leather. Quick counter right and Rahman is down! He’s up and not clear-eyed. Hardy has him backed up again to the ropes and he’s swinging. Rahman with a clean left that staggers Hardy back.

Round 3: Rahman’s feet are underneath him, but the speed isn’t there. Big uppercut from Hardy sends Rahman stumbling. That should’ve been a knockdown as he was about to fall if it weren’t for the ropes. Rahman with a couple lefts, but everytime Hardy lands, that big 94-pound difference makes itself known. Left-right from Hardy. Rahman gets in a couple of quick lefts.

Round 4: Rahman sitting down on his punches a bit more, but that’s allowing Hardy to actually counterpunch well. Rahman with a good hook. Hardy returns a counter right. Another… and a third! Rahman isn’t pressing the action much anymore. There’s a right hand from Rahman. He gets in one more good one before the bell, but it’s not gonna matter.

Round 1: Walid in black, Deen in blue. Walid comes out hot and gets in a left. Nice right hand by Deen. “Sharks” Muhsein beats Shabazz to the punch with a hook that staggers him back. They exchange rights. Ref isn’t liking Deen’s rabbit punching and warns him. Walid with a lovely straight right hand and Deen’s gloves touched the canvas… but it’s not a knockdown? What happened, ref?

Round 2: Right hands from both men. Deen not able to find his timing so far and in between the punch and clutch every few seconds, Muhsein is landing just a bit cleaner. Huge right-left-right crushes Deen to the canvas! He makes the count, but not looking good for him right now. He’s recovered a little bit and is firing back. Nope, eats another right hand behind the ear and is on his knees again.

Round 3: Nice power-punch combo from “Sharks” again that finds Shabazz’s chin. Deen with a left hand. They flurry in the pocket and it ends with Walid landing a flush left. HUGE OVERHAND RIGHT CRUSHES MUHSEIN! He’s down and struggling to get up. He’s up, but he turns around and leans against the ropes facing the crowd. He’s done and the ref stops it! What a comeback after getting knocked down three times in two rounds.

For the latest “Hardy vs. Rahman Jr.” results, as well as Misfits Boxing 003-related news and notes, click here.

Midnight Mania! Injury Shakes Up UFC Orlando Main Card Bout
Who do you got in the rematch? 👀
Derek Brunson out, Jack Hermansson now faces Roman Dolidze at UFC Orlando
Bubba Jenkins has ‘absolutely’ no regrets if he never fights in UFC; PFL allows fighters to know their ‘self-worth’
The MMA Beat: Episode 91