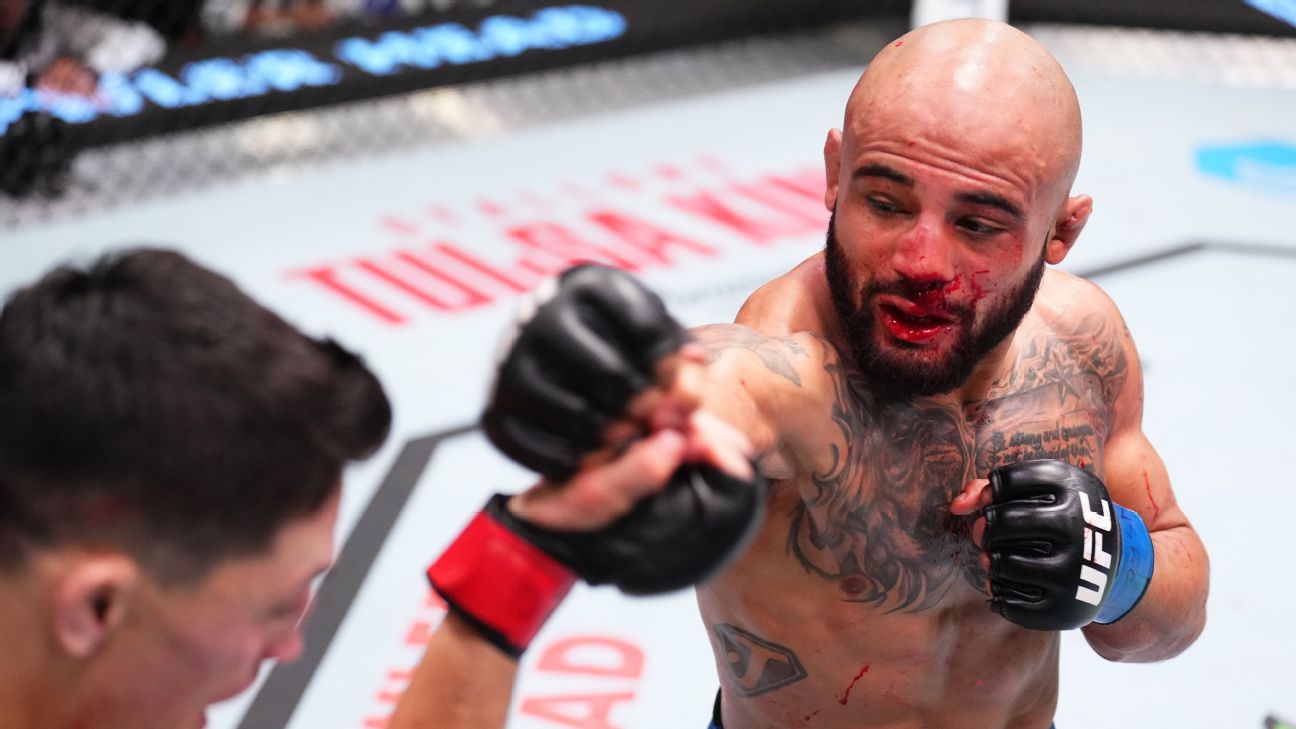 MMA coach James Krause was not allowed to corner UFC bantamweight fighter Miles Johns during a UFC Fight Night event Saturday in Las Vegas in the wake of an investigation into suspicious betting activity on a UFC bout earlier this month, sources told ESPN.

Krause was scheduled to be in Johns’ corner for his fight with Vince Morales but was not present there. Johns won via unanimous decision and explained in his postfight interview that the UFC “pulled” Krause and the promotion was “suspending him.”

Sources told ESPN that Krause has not been formally suspended by anyone. But the UFC and the Nevada State Athletic Commission (NSAC) concluded that Krause should not be cornering fighters while a UFC bout he was involved in — Shayilan Nuerdanbieke vs. Darrick Minner on Nov. 5 — is under investigation, according to sources.

Krause was informed of that decision Friday night at “the dinner table,” Johns said.

Earlier Saturday, the New Jersey Division of Gaming Enforcement sent a bulletin to the state’s licensed sportsbooks, instructing them to not offer wagering on any fight in which Krause is involved “as a coach, trainer, promoter or fighter.”

The Las Vegas-based betting integrity firm U.S. Integrity launched an investigation into Nuerdanbieke vs. Minner after several sportsbooks in multiple states reported suspicious wagering on the featherweight bout. The betting line on the fight saw a huge shift in the hours leading up to it, including cash pouring in on Nuerdanbieke, the favorite, to win by knockout in the first round and for the fight to last fewer than 2.5 rounds, according to U.S. Integrity. Krause coaches Minner and was in his corner for the contest.

In the fight, Minner threw a kick with his left leg early in the first round. It landed, but Minner than came up lame, grimacing and reaching down to grab his leg. Nuerdanbieke came forward, and Minner threw another kick with his left leg before essentially covering up and getting knocked down. Nuerdanbieke quickly finished him with elbows on the ground to earn a first-round TKO. Minner was apparently injured going into the bout, and rumors about that evidently spread among bettors.

Krause, a retired UFC fighter and highly regarded coach at Glory MMA in Lee’s Summit, Missouri, is openly involved in the MMA gambling world. He hosts the “1% Club” wagering podcast and a popular Discord channel that features his betting tips. Krause has yet to comment on the matter.

Along with the U.S. Integrity query, the Nuerdanbieke vs. Minner fight is also being investigated by UFC betting integrity partner Don Best Sports, according to the UFC.

Minner is also facing discipline from the Nevada State Athletic Commission (NSAC) for not disclosing a leg injury before the bout on his prefight medical form. NSAC executive director Jeff Mullen told ESPN’s David Purdum earlier this week that Minner’s situation would be addressed Dec. 14 at the commission’s next meeting.

“The wagering activity around the Darrick Minner and Shayilan Nuerdanbieke bout from Nov. 5 remains under review by our betting integrity partner Don Best Sports,” the UFC said in a statement to ESPN on Saturday. “At this time, we have no information that either of the athletes involved in the bout, or anyone associated with their teams, was involved in any wrongdoing.”

Mullen said Saturday he couldn’t comment on why Krause was not in Johns’ corner for the fight with Morales.