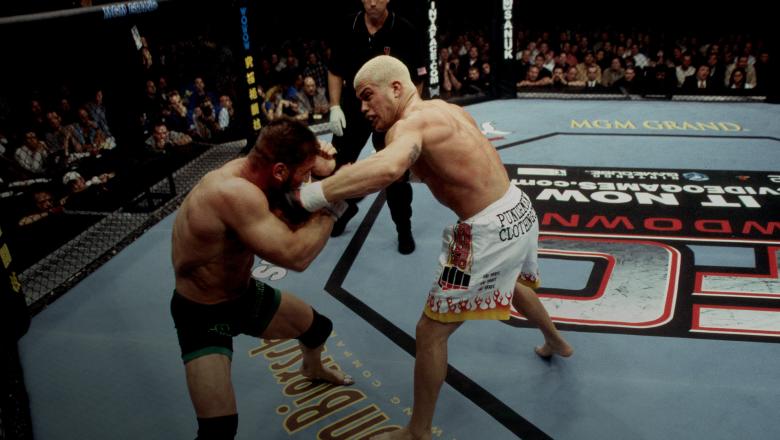 When it did, Ortiz came out with a quick right hand that missed, and Shamrock locked the champion up. Ortiz fought his way loose and nailed the challenger with a combination of punches and a knee. Shamrock fired off uppercuts from close range, but Ortiz kept throwing, with his opponent finally hitting the deck. Shamrock got up quickly and sent Ortiz to a knee with a right to the jaw and the two locked up after a furious first minute. In the second minute, Ortiz grabbed Shamrock in a clinch before scoring a takedown, and it was time for him to unleash his patented ground and pound attack. And unleash it he did, as he punished Shamrock for the remainder of the round, cutting him in the process, and making it evident that “The World’s Most Dangerous Man” was going to have a rough night.

It was a night that would last another ten minutes, as Ortiz continued to dominate his 38-year-old foe, who simply had no answers for the prime champion either standing or on the mat. Finally, after a steady three round pounding that left Shamrock’s face almost recognizable, the corner had seen enough, and they halted the bout before the bell for the fourth stanza.

After the bout, the two apparently squashed their beef.

“I always respected Ken as a fighter, I always looked up to him,” said Ortiz. “As a person we had our differences, and today we squared away our differences in the Octagon.”

“Tito Ortiz is a true champion, he beat me fair and square, and he’s the man,” said Shamrock. “We settled our differences, and it’s over and done with.”

Or was it? Not really, as the two rivals would square off twice more in 2006, with Ortiz winning each bout via first-round TKO.