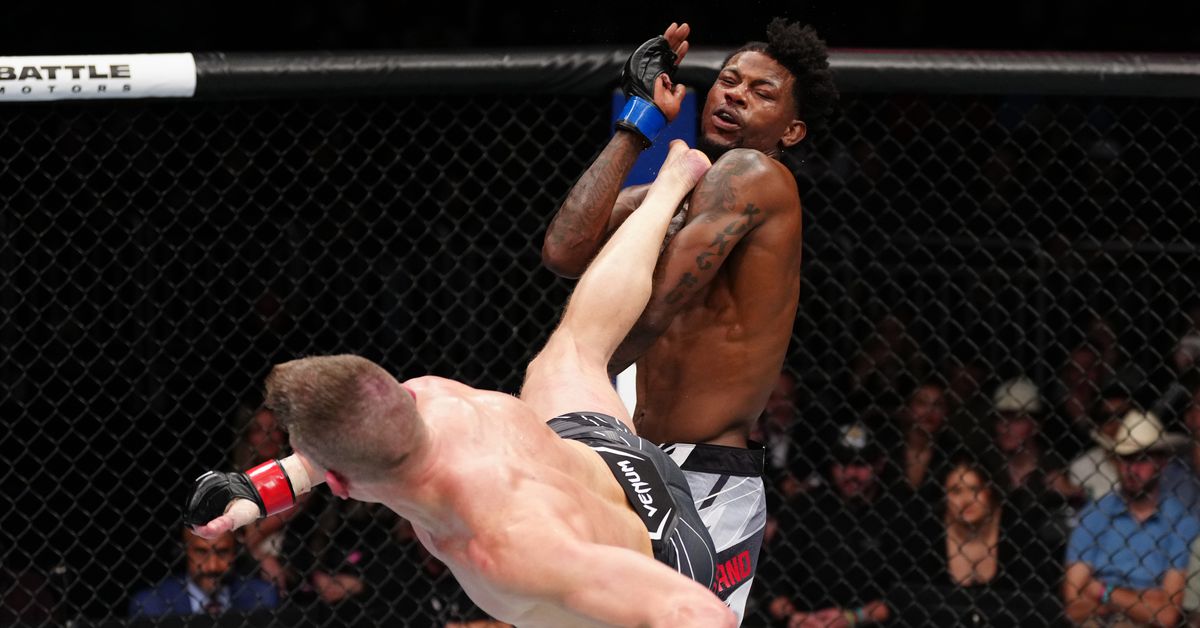 Michael Bisping was in awe during the UFC Orlando main event this past weekend.

After both suffering setbacks against some of the welterweight division’s best grapplers in their previous outings, Stephen Thompson and Kevin Holland were ready to put on a show for the fans. Battling back and forth for four full rounds until Holland’s damage sustained was too much, Fight of the Night honors were handed out and Bisping couldn’t agree more with the selection as he witnessed the action firsthand.

“Stephen ‘Wonderboy’ Thompson vs. Kevin Holland might have been the best fight that we’ve ever seen inside the UFC octagon,” Bisping said on his YouTube channel. “I know, that’s big talk. You’re crazy, Bisping. We’ve had a lot of good fights and maybe it’s recency bias, but in Orlando, Fla., Saturday night in front of a sold-out house, the crowd was epic. That fight was ridiculous, okay? Absolutely ridiculous.

“The techniques that we saw from Stephen Thompson, the showmanship and the gameness and toughness that we saw from Kevin Holland, and the excitement back-and-forth. I mean, come on. It doesn’t really get much better than that.”

Thompson was in peak form with his karate-based striking on the night. Outside of an early shot from Holland in round one that rocked the two-time title challenger, “Wonderboy” was firmly in control of the action, landing a plethora of impactful kicks in every round.

Heading into the bout, both fighters made it abundantly clear that they were looking for exciting opponents going forward in their careers and wanted nothing to do with grappling. That showed on numerous occasions whenever there was either a lockup against the cage or a moment finding themselves on the mat.

“Both guys kind of agreed, it was kind of an unwritten rule, we shook hands, they said we’re not going to take each other down, and that was awesome,” Bisping said.

“For these two, coming into this one, agreeing that they were going to fight, my god. Absolutely sensational stuff and they stayed true to that. ‘Wonderboy’ showed all of his skills. The kicks, the spinning hook kicks, the striking, the punching charges, were just unbelievable. But Kevin Holland landed a lot of huge shots as well.”

Despite his complimentary nature, Bisping’s commentary received some flack from the community. As the fight progressed, Holland visibly began dealing with an injury to his right hand, leading to his demise via doctor stoppage between rounds four and five.

During the brief grappling engagements, Holland more often than not found himself in advantageous positions, which Bisping believes “Trailblazer” should have gone back to more. No matter how exciting one may want to be, winning is the name of the game after all.

“It wasn’t a criticism, I was critiquing the performance,” Bisping clarified. “Because as analysts, as commentators, that’s what we have to do. Granted, at that moment in time when the fight was happening, it was sensational. I even said this might have been one of the greatest fights I’ve ever witnessed. As I say, maybe a little recency bias, but you can’t deny that fight was sensational.

“So you kind of had some people scratching their heads after the fact that I said Kevin Holland should have gone for takedowns. And he should have. Because yes, as a fan, sensational, and this is certainly not a criticism of Kevin Holland. No way, that fight was amazing, but when it’s done, it’s our jobs as analysts to sit down and say what could have went different?”

Champs. Zhang Weili anticipates future fight with Valentina Shevchenko, guarantees it will be ‘a banger’

Wonderboy. Stephen Thompson on UFC Orlando performance: ‘I wanted to prove to everybody that I’m still in this game’

You done filming Roid House and ready to get slapped around again!?

Ye I’m in Amsterdam jacked like van damn. You weren’t just hurt pal. You were scared hurt don’t forget it. I’m coming back to put you in a box. Full of it. I’m sending you off this earth. Permanent. Stay waiting for the road house as well pal you and the missus will love it

Well, I don’t know about that…

u 2 but just for the weed,we build weed company fuck the piss sauce I gave dat tick at press conf. Not even a thanks. He going in a box me and you going in a hot box for the knock hahahaa. I’m in Amsterdam like sadam rockin round Iran ahahah van dam chop his head quick. Must

Public translate: I’m fighting you too. But i will bury him quick first. Way handier fight/her knickers/More recent story line etc. If he bottles it, it’s you. I’m also in Amsterdam, weeds great, and I’m not a bad guy I’m just a great martial arts actor with boat loads of money. https://t.co/ExU4OBwWFM

I’m sendin this signed poster to one fan who retweets this once i hit 200,000 followers as a thank u.

U’ll hav an autographed photo of my bloody boxers after I ripped my open with that drill. pic.twitter.com/mFkXWAoKbn

Imagine sumone openin this up for Christmas haha

It is all over.

A lot of popular fighters have retired in 2022

Liver King is still natty to me

Thompson vs. Holland was thoroughly enjoyable and I actually haven’t really seen anyone go this far in terms of ranking it as a fight. It should probably be getting more love than it appears to be getting, but not sure if it deserves the absolute most love imaginable… if that makes sense. Either way, it was indeed an undeniably awesome fight. Best ever? Not for me, personally.

Monday: 84% of 529 total votes answered “No, he should be lower” when asked, “Does Islam Makhachev deserve to be the No. 2 ranked P4P fighter in the UFC?”

Where does Thompson vs. Holland rank as an all time fight?